Is Iran safe to visit? [duplicate]

Is Iran safe to visit? Since Iraq shares its border with Iran, are there any signs or news of penetration of ISIS or ISIL or IS whatever you call them, inside Iran? Is it politically stable? And also, is it being attacked frequently by terrorists? In short, leaving behind pocket thieves, is it safe enough to spent 1 month in Iran? How much is probability of coming back alive. I belong to non-western country (i.e. India).

EDIT: I am narrowing down my question: Actually visit to Iran has aim of doing some machining repairing work at some company (not sure where it is, sorry). It might take up to 1 month. But some serious news show up in news mediums regarding Iraq about ISIS (or IS or ISIL). Also that terrorists from Iraq are spreading through the world and now they also have some impact over Syria so I want to know if there are same activities (specially from ISIS) in Iran.

If you just care about terrorist attacks or ISIS activities, I can say that here is totally safe (at least now). Although, as I mentioned in another post, some regions in Sistan-Baluchestan are the exceptions because of drug smugglers and some terrorists as well.

On the other hand, if you care about political issues and somethings that are related to the government, I have no clear idea. Usually the UK and US citizens have some problems. However, I have personally seen several UK tourists in Tehran that were content with Iran.

And finally, obviously there are thieves here too. You must watch out your pocket.

Depending upon your nationality, there may be problems. According to the UK Foreign and Commonwealth Office, travel advice is separated into two areas...

The FCO advise against all but essential travel to the rest of Iran.

British travellers to Iran face greater risks than nationals of many other countries due to high levels of suspicion about the UK and the UK government’s limited ability to assist in any difficulty.

There’s a risk that British nationals could be arbitrarily detained in Iran despite their complete innocence, as happened most recently in 2011. In such cases the FCO has serious concerns that the subsequent judicial process falls below international standards.

In recent months there has been an increase in the detention of dual nationals on allegations of involvement in political and human rights activities. Dual nationality is not recognised in Iran. The Iranian authorities will deny that the British government has any legitimate responsibility for British Iranians and are unlikely to grant any consular access.

Independent travellers, especially (but not exclusively) if going off the beaten track, face greater risk than those in tour groups or business visitors. 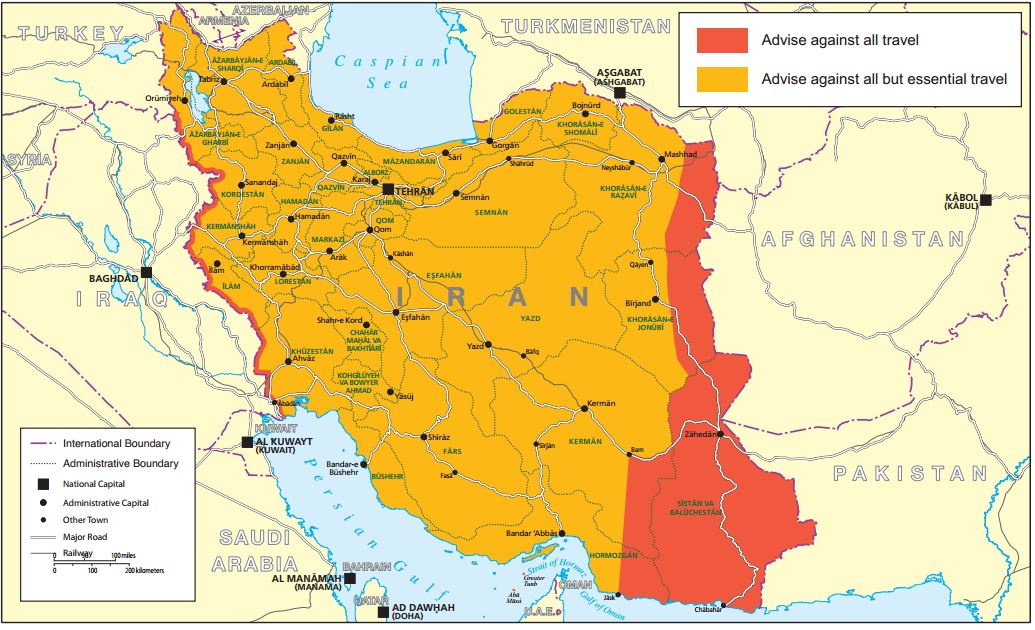 You can always get updated information from the FCO; much of it is useful regardless of your nationality, but some is applicable to Brits only.

For an alternate view,

Bahman Zenhari, a marketing executive with Iranian tour operator Pasargad Tours, said Americans have been visiting Iran for years — but numbers surged after the more-moderate President Hassan Rouhani was elected last year and replaced hardliner Mahmoud Ahmadinejad. He claimed there has been a 350 percent increase for tour demands in Iran since the election.

Short Answer: This is an unanswerable question.

We cannot know what you mean by safe. Even with your descriptives in the body of the question, you are asking about something that is personal to you and your beliefs. No one else can answer this in a way that would be completely acceptable to you.

The primary reason for this, in my own opinion is:

I cannot find any place where your own government posts any travel advisories for Indian travelers at all. It's not that there are none for Iran (or any other place) at this time. It's that there appears to be no place for Travel Advisories themselves to be posted. (If someone else finds a place where the Government of India posts Travel Advisories, I will quickly delete this whole answer, as that would be an objective answer.)

So, lacking any official advisories, you would have to accept advisories issued by other governments, such as that posted by Gayot Fow, or anecdotal comments by 'regular travelers' posted as answers. If they have travelled in Iran, then de facto they survived. If someone came here and said I had no problems, but there were daily demonstrations in Tehran against Western Imperialism, well, yeah. OK. So what? There are daily demonstrations here in Washington, D.C. about everything from war to the economy. All in all, everywhere in the world, on a personal level is the greatest place in the world, with the nicest kindest people everyone has ever met.

Not the answer you're looking for? Browse other questions tagged safety iran or ask your own question.

23
Which are safe and unsafe regions in Iran?

5
Is it safe to visit Peru?
23
Which are safe and unsafe regions in Iran?
48
What facility was our bus blocked from observing in northern Iran?
5
exchange GBP in Iran
4
Can I visit the US after I visit Iran as an Indian citizen?
11
Travel across Iran by train
4
Born in Iran with British/Swedish parents. Can I visit USA?