Are there Italian customs that a North American should be aware of? [closed]

Ask Question
Asked 10 years, 3 months ago
Active 8 years, 3 months ago
Viewed 3k times
14
votes
Closed. This question needs to be more focused. It is not currently accepting answers.
Closed 8 years ago.
Locked. This question and its answers are locked because the question is off-topic but has historical significance. It is not currently accepting new answers or interactions.

I'll be traveling to Rome and Venice in late September; are there any physical gestures, meal customs, thanking policies, and so forth that I should be aware of?

Wikitravel.org has some ideas, which I've collected and grouped together below. It covers mainly respect, religion, clothing, and advice for women.

Italy has a reputation for being warm and welcoming and Italians are uncommonly friendly and laid back, as well as very used to interacting with foreigners. If you are polite and civil you should have no problems, but don't expect that the average Italian speaks or even understands English (except for young people). Also, it is not typical in Italy for people to introduce themselves to newcomers: you will have to introduce yourself to others. It is not rude but is just not the custom.

Italians greet friends with two light kisses on the cheek. Males do, too. To avoid ending up kissing on the lips note that you first move to the right (kiss the other person on their left cheek) and then to the left. Even if you're merely acquaintances, this form of greeting is usual, both on arrival and departure. When groups are splitting up, expect big delays as everyone kisses everyone else. On first introduction a handshake is usual, although not necessarily the firm businesslike shake other nationalities may be used to.

In general, when joining or leaving a group, you will shake hands individually with (or kiss, depending on the level of familiarity) each member of the group. In the South, it is considered bad luck for four people to shake hands (two and two) at the same time, forming a cross. You will see Italians, especially older ones, pull back from a handshake and wait to shake your hand until the other handshake is finished, to avoid this.

If your cultural reserve makes you feel uncomfortable with this, don't worry too much. The British in particular have a reputation for being reserved, so you can always play up to this expectation, and Italians will understand you don't mean to be rude. Handshakes are also accepted greetings, and some Italians will kiss compatriots and offer their hand to the awkward Brit.

To make friends, it's a good idea to pay some compliments. Most Italians still live in their town of origin and feel far more strongly about their local area than they do about Italy in general. Tell them how beautiful their town/lake/village/church is and possibly add how much you prefer it to Rome/Milan/other Italian towns. Residents can be fonts of knowledge regarding their local monuments and history, and a few questions will often produce interesting stories.

It's important not to judge people in return by their choice of clothing. Styles do not necessarily carry the same connotations in Italy that they would in Britain or some other countries. A woman in fishnets, stilettos, miniskirt and full makeup at eight in the morning is probably just going to work in a bank. Almost all youths lounge about in skin-tight tee-shirts and casually-knotted knitwear (and are very perplexed by the response they get when they take their sense of style and grooming to a less 'sophisticated' climate).

Sometimes, clothing rules are written. To visit a church or religious site you will need to cover yourself up; no bare backs, chests, shoulders and sometimes no knees. Sometimes museums and other attractions can also be strict; no bathing costumes, for example. If you want to visit a church or religious site it's a good idea to take something to cover yourself up with; for example a jumper or large scarf. Some churches supply cover-ups, such as sarongs are loaned to men with shorts so that they can modestly conceal their legs. Even where there are no written rules, it's worth noting that bare chests and large expanses of sunburnt skin are unacceptable away from beaches or sunbathing areas, whatever the temperature is.

Sexual harassment is not regarded in the same way in Italy as in English-speaking countries. The general atmosphere is pretty loose, and women should be prepared for attention. However, the tone of this 'attention' is generally less aggressive than you may have read and seen in movies. Men may call out compliments such as 'bella' (beautiful) or, if you are lucky, 'bellissima' (incredibly beautiful), as they did in the 1950s and 1960s. Bear in mind that this is still a macho country and one until recently led by a man (Silvio Berlusconi) who is famous for his associations with women. Men and women should therefore expect to hear people saying things that would be considered very offensive in other parts of Europe and North America.

Anyway, culturally, these comments are not seen as harassment; if you respond angrily, everyone will be very surprised. Whereas women of other nationalities may be used to telling strangers (in no uncertain terms) to shut up and go away, in Italy, the norm is to ignore the attention. In any case, responding in English or in imperfect Italian will only encourage more attention. Do as the Italian women do, and sail past with your head held high. If you avoid eye contact and don't respond, you are extremely unlikely to be pursued or hassled further.

One of my guidebooks said "be sure to ask for the bill, they aren't going to bother you by bringing it over to you when they think you're done." Yet every time we asked for the bill it turned out it was already tucked under a saucer or plate that had been delivered to us. Coffee or dessert or whatever. So be alert to the possibility and look for tiny slips of paper (like a convenience store receipt) being delivered with your food.

First of all there are quite a few gestures you should master in order to understand Italians. Here is a nice picture of the most importants: 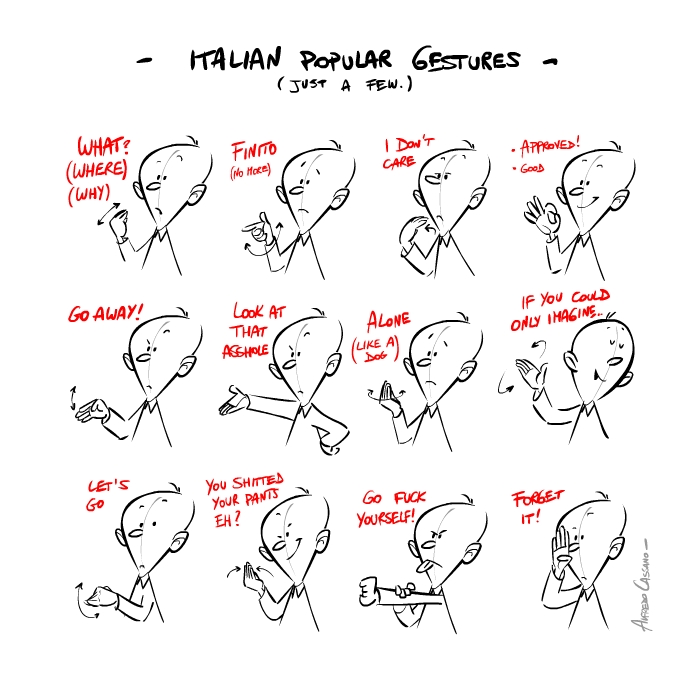 [A note about the first gesture "What? (Where) (Why)": if you do that with a angry face it means something like: "What the f*** do you want?". It's not particularly nice. So, in order to really mean "What?" try to rise your eyebrows emulating a surprised facial expression]

You have to understand that Italians use to think that these gestures are known in every single part of the World, no one doubt it, not even remotely and that means you are expected to be fluent in Italian gestures. Be prepared. Once I was visiting San Gimignano, and on the bus a Japanese couple was taking a crazy amount of pictures. An Italian man, very proud of his country, said something like "Bello, vero?" [It's nice, isn't it?]. He soon realized the Japanese couple didn't know Italian so he resorted to (what he tought was) the universal language: the "good" gesture in the picture above. For his great surprise they didn't seem to understand it either so he walked away very disappointed saying "Giapponesi..." (Japanese..).

Unlike the States you are not expected to tip the waiter/taxi drivers/wathever. You can obviously do that but it's not a must like it is in the USA. Doing it is much appreciated but it means you received a service way beyond your best expectations.

When you first meet someone a shake of hand is all you have to do. On the other side, if you start hanging out with friends more consistently you are expected to double kiss the cheeks. I would say that in the North a male only kiss women and shake hand with other men while the girls kiss other girls too. In the South everyone kiss everyone, so it's easier. Here, again, Italians are not aware of the fact that in other countries this isn't the standard so they will probably just go ahead and kiss you in the first place. Don't be scared, this usually doesn't mean they want "more" from you. If you know what I mean. Refusing this kiss would just make them think you are a little weird.

Driving isn't as crazy as most Americans tend to think. Don't expect to find a semaphore at every intersection and you will be good to go. Ah, here you can't EVER turn right while red (even tho you will see a lot of people doing it anyway).

Italians usually eat sweet foods for breakfast as opposed to savoy foods. They don't fry hashbrowns with a crazy amount of butter, they don't scramble eggs and cook bacon. They just have an espresso or a cappuccino with a croissant. Also, dinner is usually eaten a lot later than it is in the States. Don't go to a restaurant before 19:30 or 20. 20:30 is the most common hour (the bigger cities in Northern Italy usually have dinner a little earlier than this).

An unconventional, though accurate, way of learning Venetian and Italian customs from a North American point of view is to read Donna Leon novels featuring Commissario Guido Brunetti.

More than a simple entertainment, they provide an insightful picture of modern Venice.

Not the answer you're looking for? Browse other questions tagged local-customs italy or ask your own question.

12
Is it worth getting a one-week public transportation pass for Rome?
14
Paranoid about missing my return flight home from Rome. What to do?
8
Free wifi situation in Italy
27
What to do with the water served with hot chocolate in Italy?
6
Italy Regional Trains itinerary and routes
73
With the passing of Thai King Bhumibol, are there any customs/etiquette as a traveler I should be aware of?
11
Are there any laws in Italy about head coverings I should be aware of?
4
How "cheap" it is not to order drinks together with the meal in the restaurant?