I'm flying down to NZ's first Bitcoin conference on Friday, 31st October and will rent a car from Dunedin airport. I'm planning to either drive direct on Friday night or set off very early Saturday morning, while it's still dark.

Which of these 3 routes offers the least amount of windy mountain roads / other perceived hazards? 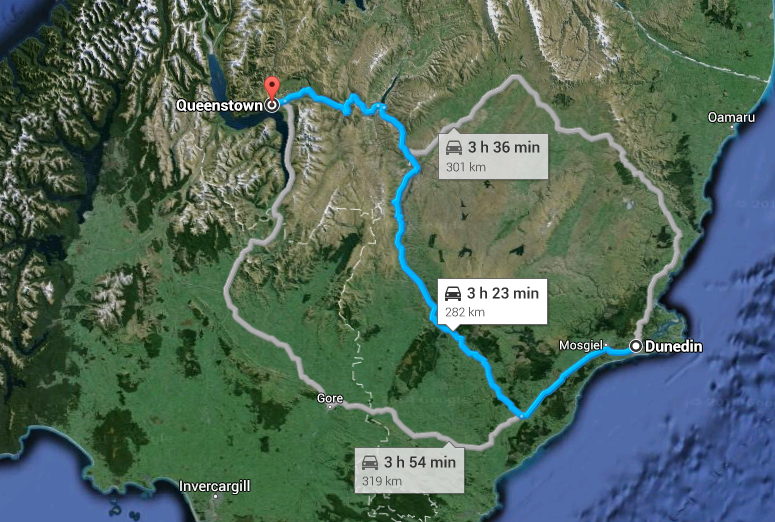 I'll be flying out of Queenstown for the return, so only concerned about the one-way journey.

I'll ask my wife tomorrow and she'll contradict whatever I suggest BUT they are all lovely and scenic and not overly terrible to drive. I suspect that its is likely that by far the greatest danger to your likelihood of lifelong happiness will occur at the conference :-). Almost a 3 side coin toss - but I'd say take the most northerly. But all are marvellous.

I'd recommend taking the MOST scenic route as it sounds like you are not getting much opportunity to see the country otherwise - although Queenstown itself is quite picturesque and nicely surrounded by mountains which loom over the town, usually almost unseen by locals who get used to them. The two most northerly routes work out at just over 80 kph average on Gargoyle's route finder and the southern one is a few kph slower - although I'm not sure why. I'd drive any of them without any concern at all. At Google's suggested trip times they should be a comfortable drive. Add 30 minutes to any one and it would be a very sedate drive

All routes involve some winding road - this IS NZ after all.
I would not have thought of wind as an especial hazard anywhere there - the most dangerous place for that that I've met in NZ is the Auckland harbour bridge - not a problem for you on this journey. That said, you can find the occasional wind blown cutting essentially anywhere in NZ and its just one of the things to be aware of - but no more so than realising there MAY be 500 sheep on the road just around the corner or remembering that hammering into blind tight corners is more likely to reveal yet another even tighter corner than in some other countries. BUT anything like sensible driving will get you there safely. I've read comments by Australians noting our lack of signage but that is hard to understand - all highway corners of any risk at all are well posted with advisory speed signs which are generally VERY conservative. You can probably always take them in the wet at above posted speed. (With an old style Supercharged MR2 in the dry you can double them with ease at up to the max speed I was willing to drive - and triple the slower ones with 'a little concern that you may just possibly have overdone it this time' - but you never had.)

Almost not related: On the top two routes you pass the Southern end of The Crown Range on your final leg. You don't get to drive it unless you want to - and you don't :-). When it was gravel it was quite something, but those days have gone, alas.

Red Bull quad rotor RX7 does the Crown Range - it's hard to tell whether the chopper pilot or the RX7ian are having the most fun.

Something to consider this time of year, especially early morning / late night down south is the ice risk. If it's still cold, ice and indeed fog can be a factor.

Also beware of early morning livestock being moved on the roads.

Last time I did this trip I took the 'Presidential Highway' (through Clinton and Gore - the southern route) and it was fairly straightforward.

As Russell mentions, all will be scenic and at least you'll be seeing the most mountainous parts during the day.

Not the answer you're looking for? Browse other questions tagged safety driving routes new-zealand or ask your own question.

6
Driving from US to Central America
10
Safest road route from Tangier to Togo
1
Queenstown, New Zealand private transfers
20
Is there a “safest” route through Pakistan (from China to Iran)?
5
Ride-share or alternate means of getting from Dunedin to Queenstown?
8
Which route to take driving from Seattle to Boston?
4
Easy driving, direct route from Syracuse, NY, to Lake Placid?
2
Best road route from Córdoba to Mendoza, Argentina?