While browsing this article, I saw a photo of mikos, and I would like to see some in real life.

A miko (巫女) is a Shinto term of Japan, indicating a shrine (jinja) maiden or a supplementary priestess who was once likely seen as a shaman but in modern Japanese culture is understood to be an institutionalized role in daily shrine life, trained to perform tasks, ranging from sacred cleansing to performing the Kagura, a sacred dance. 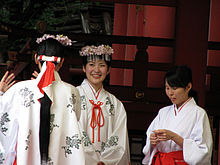 Miko at the Ikuta Shrine, by Flickr user MShades

I think I've been to a moderate number of shrines, but I don't think I've seen any mikos.

If possible, they would be wearing clothing that mikos usually or traditionally wear. If photography is allowed, and the mikos are comfortable with their photo being taken, then that would be an added bonus.

A place containing information about mikos would be an added advantage.

Anywhere in Japan (preferably not Yasukuni Shrine) or Australia is fine.

Your best bet would be to visit shrines during a festival such as Setsubun or New Year's day. These will usually include some public ceremonies, rituals or performances in which the Miko participate (Kagura dance is mentioned in your Wikipedia excerpt), and these are public events with many people attending and taking photos.

Less formally, mikos are simply employees of the shrine (it's a very popular baito option with college girls, since the pay is relatively good, the job is not tiring, and you get to wear a nice costume), when there is not a festival they perform various tasks around the shrine like cleaning or attending the souvenir shop. Just go to your local shrine, anywhere in Japan, and you will find them. Taking pictures is certainly OK, and they don't mind a little chat either if they are not too busy (and you can speak Japanese). I took this at the Hachiman-gu shrine in Morioka: 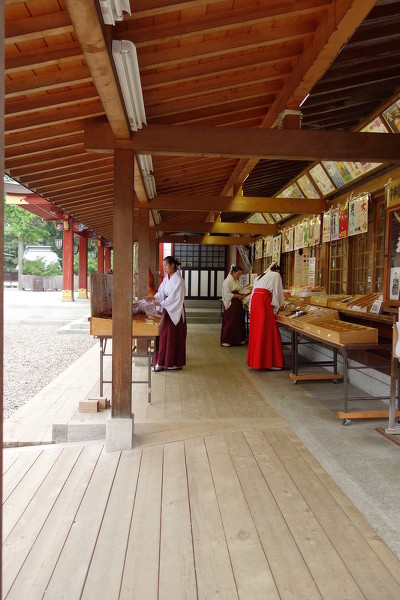 Not the answer you're looking for? Browse other questions tagged japan australia religion shinto or ask your own question.