What does the author mean by 'back to back' and 'hidden city' ticketing hacks?

At this link about travel hacks

what does the author mean by this?

Basically means buying a ticket A>M>Z where that is cheaper than A>M, but only going as far as M. Only works on singles (because the return would automatically be cancelled if the full booked route is not flown) and even so might not work after a few attempts (ie once the airline gets wind of the attempt to violate its rules, which do not allow this).

For a weekly commute, the column in the middle represents four ‘conventional’ tickets outbound to destination on Mondays and each returning ‘home’ on a Friday – none spans a Saturday so could be more expensive than otherwise: 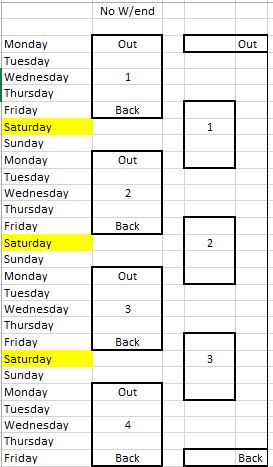 On the right is one ‘conventional’ ticket but with the return one month later. However the commuter is not stuck at the destination meanwhile, since from there three weekly tickets ‘destination/home’ (the directions are reversed) should get the commuter to the right place at the right time, with each of the three spanning a Saturday and hence perhaps less expensive than otherwise.

One month is only for this example, such commuting may last years at a time. The usefulness of this strategy has diminished materially, as most airlines have abandoned the discount for a Saturday-night stay-over.

Not the answer you're looking for? Browse other questions tagged air-travel tips-and-tricks terminology hidden-city-ticketing or ask your own question.

2
Skip leg and book a connection with the same airline
1
Question about booking flight to different city than destination city
1
Round trip tickets much cheaper than one ways, considering purposely missing layover?
1
Landing in hidden city, coming back from "official" city: is it possible?
28
Can my proof of onward travel from the US be to a country other than my country of citizenship?
15
Problems associated with booking flights inside another set of flights?
3
Changing baggage final destination - hidden-city ticketing
6
Which airlines/flights check gate-checked bags to the final destination?
3
Can I skip the last leg of my domestic return flight?
1
Why is Mumbai - London - Dallas - Denver more expensive than Bangalore - Mumbai - London - Dallas - Denver?
See more linked questions