BUT - the definitive guide to how to travel to anywhere from anywhere by train is "The man in seat 61" - be sure to find out where the name comes from :-).

For the fastest of all journeys you could take a G train to Shanghai and THEN take the "Maglev" train to the Pudong International airport. Under a 15 minute journey as I recall but daytime speeds of up to 430 kph (they say). The onboard speed gauge and actual train speed seem to not always quite match so actual speed may vary but you will find it very very very fast and noticeably faster than anything else. Cars on the adjacent motorway crawl along at 100 kph as you leap upon them from behind (figuratively anyway) and hurtle past in seconds. Marvellous !
I once got to travel the route 3 times in one day due to travel circumstances. Yee ha :-). 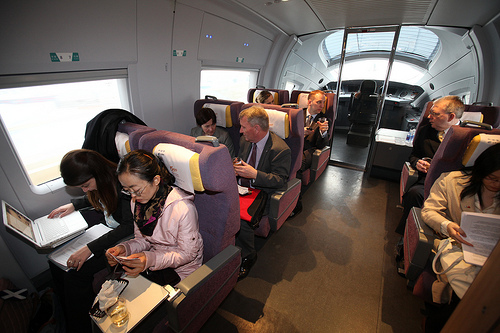 10
How to book a train ticket from Beijing to Shanghai as a foreigner?
14
Do the Beijing-Tianjin high speed trains often get fully booked?

7
How should I start to plan a journey from Moscow to Beijing by train?
10
Can I buy train tickets for a Shanghai - Beijing trip in Hong Kong?
10
How to book a train ticket from Beijing to Shanghai as a foreigner?
4
Very confused about China visa (American) and the possible 24 and 72 hour exemption rules
11
Should I book my train connections in advance in China?
6
How to get from Lviv (Lvov) to Krakow by train on the cheap?
14
Do the Beijing-Tianjin high speed trains often get fully booked?
2
Is the boarding process/time the same for any train in China, or does the bullet train have its special boarding process?
19
What is special about the area 30 km west of Beijing?