I am forever seeing these extra of bits information when browsing for flights directly with the operator. Just how true are they? Where do these figures come from?

I find it hard to believe that a relatively uncommon flight has 22 people looking at it nearly 2 months away from flying. How true is this? The skeptic in me suggests that it is a ploy to entice you to book the flight quickly. 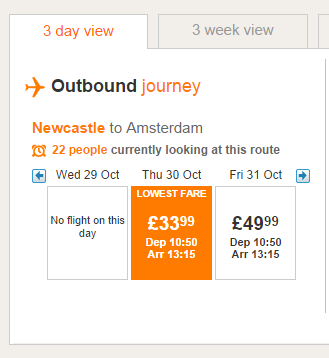 Example 2: Only 3 seats left at this price

Again, is this information true? Is this just to get you to book now? I suppose the question is, are the figures given in these examples true or are they just ploys to entice the buyer to book now and are randomly generated? Does anyone have any understanding of where airlines get these figures from? 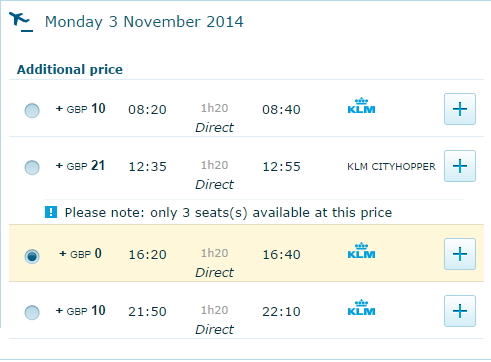 They are definitely there to entice buying and some websites have been accused of simply making them up out of thin air (I heard about hotel booking platforms but since I can't find any reference right now, I won't name names).

If they are not entirely deceptive, the numbers might very well be “improved”, e.g. by counting people who have looked, say, at the London-Amsterdam route, for any date (and not only at one specific flight), in the last 24 hours or something. I don't have any insider info but, like you, I cannot believe that 20+ people are looking at almost every Easyjet flight at all times of the day so I guess they use a broad definition of “currently” and “route”.

On the other hand, depending on the specifics (size of the airplane, etc.), the bit about 3 seats left at this price is plausible. That's the way airlines do price discrimination. For example, there could be a few seats/tickets available in the cheapest price for the cheapest fare, then a dozen or so in the next one, etc.

It does not mean that they are going to be sold immediately or that the next bucket is massively more expensive but it does mean the price could go up shortly.

Example 1 I can only speculate on, but the figure given is almost certainly not for the specific flight you're looking up, nor does it correspond to the number of free (or taken) seats on that plane, since airlines do not release this information to anybody. (Exact load factors on individual routes are closely-held trade secrets.) I'd venture a guess that the "22 people currently looking" just means that 22 people have searched flights from Newcastle to Amsterdam, for any date, some time in the last 24 hours (or whatever window is "currently" in their book). Whatever the case, this is indeed just a ploy to make you book faster, and you can pretty much ignore it.

The figures in Example 2, on the other hand, are almost certainly true. Tickets available on a plane are divided into coded fare buckets, meaning they'll (for example) sell ten seats at $99 as a "Q" fare, twenty seats at $199 as a "B" fare, etc. Reservation systems have access to this information, including how many seats are left in each bucket (availability), and you can even look these up yourself by subscribing to a tool like KVS. See How to know a flight is not full? for some more discussion about this. So if the website is claiming that there are only 3 seats left at a given price, they're not kidding.

The main caveat is that the buckets aren't static: there's nothing stopping an airline from deciding tomorrow that B's aren't selling at $199, so let's shift ten seats over to Q at $99. However, the closer you get to the flight date and the more the flight fills up, the less likely it is that you'll get a discount. The golden rule of flights is that if you know you're going, and you can afford the price now, you should book it now.

is this information true?

Who knows? I wouldn't say advertising rules really apply here. They're not misleading you about the product in anyway. Without working on the actual web site your only guessing.

Is this just to get you to book now?

I suppose the question is, are the figures given in these examples true or are they just ploys to entice the buyer to book now and are randomly generated?

again who knows if they're true. But they are ploys to entice the buyer to book. That's what every pixel on that site is designed to do!

Does anyone have any understanding of where airlines get these figures from?

This value could easily be generated by their standard site tracking software (see Google analytics). So it could be true or it could be something made up by marketing.

Not the answer you're looking for? Browse other questions tagged online-resources bookings flight-search-engines or ask your own question.

126
Flight tickets: buy two weeks before even during holiday seasons?
28
How to know a flight is not full?

38
How can I book a flight plan found on Matrix Airfare Search?
21
How can I tell hotels exist that aren't on the booking web sites?
26
Is “lol.travel” a real travel/flight booking site?
2
Can booking a flight or an hotel stay be more expensive during the weekend?
4
Online booking for flight spanning multiple carriers?
7
How to find the cheapest destination for a meetup of friends from several countries?
2
Seat selection when using online booking sites
0
Flight operator says sold out, codeshare says not sold out
1
Flight rebooking free (up to fare differential)