Food on the TGVs between France and Spain?

In a few days time, I'll be taking a long TGV trip, on the new(ish) service between Barcelona and Paris. Given the length of the journey, I'm wondering about the food available on board, and hence if I should be looking to buy some things before boarding or not.

The English page on TGV food and drinks seems to be rather vague on what's available, and also on quantities available. The English page on the Paris-Barcelona services mentions Restauration carriages on board which I take to be a badly translated bit about food being available, but I can't work out if that means there's a normal Bar TGV cafe, or something else?

What is the food situation on these long cross-border TGVs?

These TGVs have a different menu to the regular domestic French TGVs!

The menu is branded as "b2in", and features the logos of both SNCF and RENFE on it: 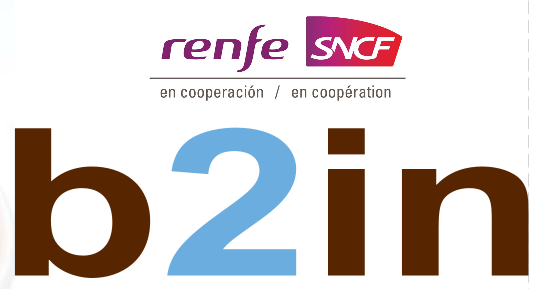 A pdf of the menu can be found here on the Elipsos site - if that isn't the exact one as found on the TGV last weekend then it's very very close to that!

It largely contain the same kinds of things as the regular TGV menu, just many of the items are more spanish influenced. For example, they have Spanish beers, and one of the sandwiches features Jamon Iberico. French options were equally present, but most people seemed to be ordering Spanish things out of preference whenever I happened to be in the bar to see.

Otherwise, there was a small trolley that made the rounds of the seats from time to time, with a subset of the menu available. The staff manning the bar and trolley seemed (from accents) to be a mixture of RENFE and SNCF staff, but all spoke fluent Spanish and French, with many also speaking English and Catalan too.

Oh, and based on this RENFE page on their international high speed services, it seems that the Paris-Barcelona route is the only one served with TGV Duplexes, while the Barcelona-Toulouse, Barcelona-Lyon and Madrid-Barcelona-Marseille routes use Spanish AVEs. It's therefore not clear if the others use this menu too, or if they have the regular Spanish AVE menu onboard.

First apparently this line is indeed operated with TGVs and voyages-sncf says that there is a restaurant coach on these.

I found the exact menu but in French (and with bad quality graphics). In short, they offer a choice (I mean there are multiple items of each type) of hot dishes and cold sandwiches, desserts, cookies, hot and cold drinks, usually packaged before boarding (no food prepared on board). They supposedly improved the quality of products last year, following critics.

There is one coach with the "restaurant" (a counter with someone selling products and some tables you can stand by) per train (sometimes two trains are attached to each other, but one is not accessible from the other).

However, in France it is very popular to eat your own food on the train (partially because the food on board is rather expensive). Many people pack their sandwiches/picnic and their drinks before boarding and eat at their seat (there is a small tablet for each seat). I would recommend you to do so with at least some food and if you want more or if you want hot food/drinks, go for the restaurant coach while on board.

Also note that there is no break during the journey (unless you have a connection), so you cannot get off the train and buy something in a station - the train would leave without you.

SNCF's TGV page has a section about the TGV BAR/Restaurant which you might want to look at.

They offer both snacks but also full meals - e.g. the page mentions:

Several suggestions are available for a wide range of prices:

Feeling a bit hungry? The TGV bar also serves sweet snacks during the day. From 18:00 you can choose a savoury snack (crisps or peanuts) to enjoy with your alcoholic beverage.

The (Spanish) renfe page is even more sparse on information, but also mentions restaurant service available.

Experience on TGV says that in normal operation there's two of those carriages on every train and food is usually acceptable though not comparable to a good restaurant. Note: I don't know about the cross border service to Spain, but I have found that in some cases they sell out before the end of the journey..

Not the answer you're looking for? Browse other questions tagged trains france food-and-drink spain high-speed-rail or ask your own question.

25
How to overcome the language barrier when visiting France and Spain?
10
Left luggage facilities in train stations in France or sending luggage from France to Spain?
13
Single vs. Multiple entry Schengen visa, for Spain and France?
5
Vegetarian food in Cala Mayor Beach, Spain
11
When does high-speed rail between Seville and Granada begin?
12
Is it legal to camp outside in France and Spain?
19
What's the temperature in TGVs?
3
Attending a conference in Beijing with special dietary needs
1
Passport stamp - France Study Visa and Stopover in Spain