Straight razor on a plane to Moscow from abroad

Hi I have a simple question, I’d like to know if I can put my straight razor in my checked-in luggage and be sure not to be arrested or something. It’s a regular straight razor and I don’t think it qualifies as weapon.

Straight razors are allowed in checked-in luggage all over the world. Anyway, they are not allowed in hand luggage as they can be used to harm someone.

I will list three sources that regulate this, TSA (US), EASA (EU), IATA (the rest of the world), these rules are not enforced all over the world, but as long as these three organizations have the same rules regarding an issue, it is safe to assume that the rest of the world will follow:

Some governments have directed that for safety reasons, all knives, sharp objects or cutting implements of any kind and of any length, whether of metal or other material, and some sporting goods must be packed in checked baggage. They cannot be carried in the cabin baggage nor on your person.

These items include (but are not limited to) knives (including household cutlery) and knife-like objects, box cutters, corkscrews, straight razors.....

Razor-Type Blades - such as box cutters, utility knives, and safety razor blades (disposable razors and their cartridges are permitted)

When packing, you should bear in mind that certain articles, that may appear harmless, are not allowed in your hand luggage for security reasons. Such articles would include: gases and sprays such as pepper sprays; sharp objects such as knives or razor blades; drills or saws; baseball bats or clubs. Such items will either have to be surrender at the security checkpoint or will have to be packed into your hold luggage.

You have to differentiate between 3 things:

Number 1 depends on the airport of departure (and any other airports where you get re-screened). For example, if you fly from the USA to Moscow, a straight razor would be most likely allowed in checked-in luggage (but forbidden in carry-on) by TSA rules. If you fly through a re-screening airport like AMS, the rules of the security agency at that airport will also apply (which I'm guessing are similar). I can't imagine why security rules at any airport would forbid blades in checked-in luggage.

Number 2 depends on the airline. Airline policies try to reflect #1 above, but don't always match it exactly. From what I know, airline policies that are not also government rules are poorly enforced, and besides, I can't imagine why any airline would forbid checked-in blades.

Number 3 can be tougher. It has to do with whether something is allowed into the country at all, and has nothing to do with air travel. For example, Canada is very strict about it - many things (including many types of knives/blades) are considered weapons and are completely prohibited, failing to declare them is a serious offence. For customs, it doesn't matter of course if the luggage is carryon or checked in - everything can be searched. However, I doubt Russia's customs rules on potential weapons are as strict as Canada's, and I think a straight-razor should be fine - after all, they must be used by Russian barbers : ). But if you want to be sure, you need to check the customs rules (as well as Russian laws about carrying such a blade in public).

By the way, there's another concern in Russia, both in airports and elsewhere: There are many security checkpoints (at entrance to railway stations, airports, etc - even before you have a chance to check your luggage) with X-Ray machines. They are mainly designed to detect guns, bombs, etc, nobody will probably care about a blade (as long as it's generally legal to import and carry, see above). But if you bring one to the airport, you might get a talk from the security checkpoint operator about the fact that you must check it in and can't carry it on (this happened to me once when carrying a souvenir knife into a Russian airport).

According to the S7 Airlines baggage policy, there is no restriction on blades in baggage (or even carry-on baggage, which is surprising and probably not accurate). 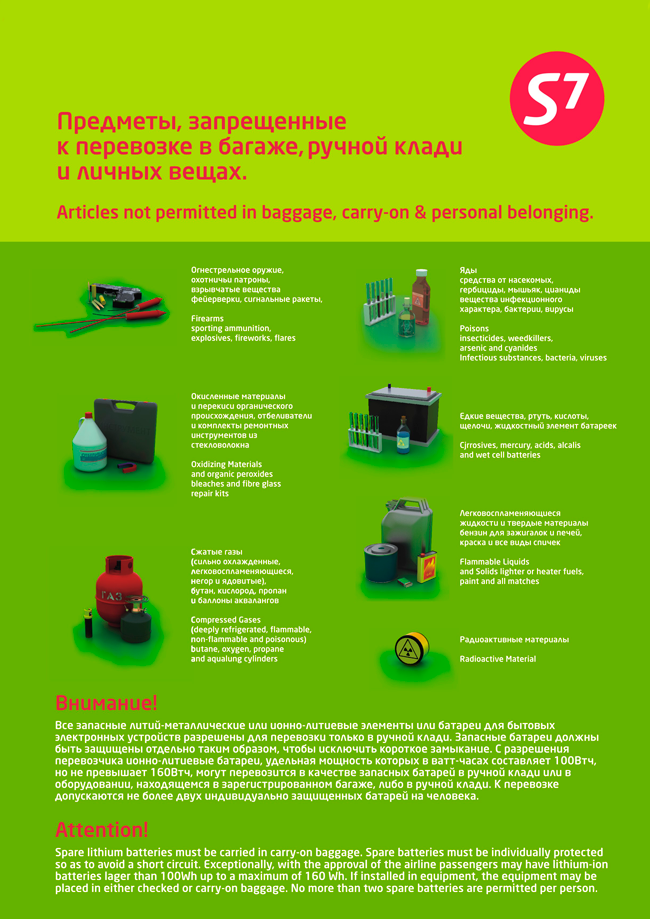 From the Federal Customs Service, The list of personal-use goods which import and (or) export from the customs territory of the customs union is banned or restricted, blades are also not mentioned. I don't imagine a razor would fall under the category of "civilian weapon".

Not the answer you're looking for? Browse other questions tagged luggage international-travel russia airport-security prohibited-items or ask your own question.

6
What's the worst that can happen when attempting to fly with double-edged razors?
4
Can you check an envelope? (of razor blades)
4
Bringing plants on a plane from US to Denmark
15
Can you put an ordinary Mac laptop (with the battery) in checked luggage?
1
Can I bring these OTC medicines to India from the UK via Doha?
6
Can I bring a pack of razor blades on a plane?
18
What are the shaving options for the carry-on traveler?
4
Is it allowed to carry steel pipe in checked luggage in plane?
6
Should I put a compass in carry-on or checked luggage?