Does any airline in the world allow air travel without government identification?

It seems that pretty much every airline requires at least one form of government identification for flights, even if it's a local flight within a single country.

Does any airline in the world form an exception to that rule? I was recently surprised to learn that some airlines still allow smoking on-board, so I'm sure there are also exceptions to the documents policy.

I fly frequently on domestic flights in New Zealand (both Air New Zealand and Jetstar), and don't recall the last time I was asked to show identification.

Please remember to carry proof of identity with you as you may be required to present this at check-in. A driver's licence, passport, Airpoints or Koru card, credit card, birth certificate or Community Services Card are all suitable forms of identification.

and for Jetstar domestic:

It’s worth noting that all passengers, including children and infants travelling with an adult, need to provide current and approved identification. We may ask to view this ID if necessary.

So it appears that there is a requirement to carry ID, but in practice the airline is not required to verify it.

In my experience the strict requirement for ID on domestic flights seems to be an American thing.

Yes, I have experienced this quite a few times on intra-Schengen flights.

As said in the link from the comments Lufthansa probably is the most prominent case due to the extreme amount of automation, but I have flown with a number of airlines and from/to a number of airports and can tell you it depends on the airport/airline combination.

Routes I have flown within the last two years without having passports checked (note that routes listed are strictly one-way, I will list return flights separately if they were without checks):

Note that I have been checked on other routes/return legs on Vueling, Ryanair, Meridiana - and I can't judge in the case of Norwegian.

Thus the answer to your question is - yes, some airlines, on some routes do, but passport checks are still very much the norm, even within the Schengen area.

For the US specifically, the Transportation Safety Authority website states:

Adult passengers 18 and over must show valid identification at the airport checkpoint in order to travel.

And has a list of acceptable forms of ID which includes obvious things like passports and residence permits, but also drivers license and some traveler cards - full list here.

In the UK, I have travelled a few times with Loganair - Scotland's regional airline. Not once was I asked for an ID, not even when I purchased the tickets in person at the airport in Kirkwall. Note, of course, that their island hopper planes sit 9 passengers and don't even have a dedicated cockpit, so the pilot simply sits in the front row of the plane. Maybe security isn't really their biggest problem.

It's one of these aircraft: 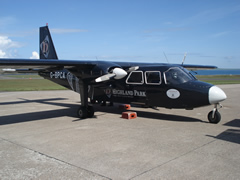 I believe that BA still suggest you carry some photo ID with you when doing this, eg in case of being asked by police, but you can (and I have) flown with them domestically just using your loyalty card as ID.

Virgin Australia recommend that you take government ID with your when flying within Australia, but were happy to accept my Virgin Atlantic frequent flier card as proof of identity. Like the BAEC card, neither has any photos or anything like that on it.

I have taken six domestic flights during my latest trip to Japan with three different airlines and wasn't asked for my passport (or any other ID) for any of them. It may be related to the fact that Japan does not issue national ID cards as some other countries do (the closest thing is a driving license, but it is expensive and troublesome to get). The airlines don't state this as a requirements on their websites either (see ANA, JAL).

(However, all foreigners in Japan are required by law to carry ID at all times—passports for tourists and residence cards for long-term residents.)

Not the answer you're looking for? Browse other questions tagged air-travel airlines paperwork identity-cards or ask your own question.

56
Is it true that people "can just take all the luggage off the airport conveyer belt and leave with it."?
54
What should I do after buying an airline ticket?
36
Are there any airlines that still allow smoking on-board flights?
18
I'm on a train to Vienna and I forgot the documents home, what can I do now?
30
Why does Ryanair check non-EU passengers' visas on intra-Schengen and domestic flights?
10
How to find hotels in Europe which allow for anonymous check-in?
13
Can I enter other Schengen countries with EU residence permit but without passport?
2
Can one board a flight with photo ID bearing an old last name?

3
Air Travel within the US
8
Air travel without known date
2
Does travel insurance cover a leg for an unrelated airline?
5
I have no identification to get on the bus, how does that work?
2
Is it possible to travel within the US without an ID?
4
Getting refunded for a flight which I'll be prevented from boarding
30
How often do typical passenger flights have problems with turbulence?
0
Does Emirates allow date changes for any reason?
0
Does the 24 airline ticket cancellation rule allow refunds even after “check in”?