Why are balloons prohibited at Amsterdam Schiphol?

At Amsterdam Schiphol Airport there are prominent No Balloons signs on each entrance to train platforms. 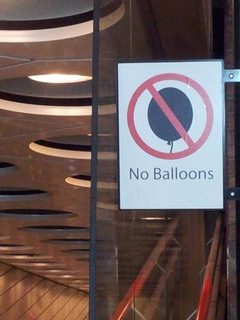 What is the story or rationale behind that ban?

I found this article. Loosely translated:

Station Schiphol disallows balloons since recently. The reason for this is that it has happened a few times last year that a kid's ballon hit the overhead power lines, often resulting in smoke and smouldering particles.

Because the smoke alarm is very sensitive, because of safety concerns with the long train tunnel, this will set off the alarm very quickly. When that happens, the tunnel and the entire train station have to be evacuated. This leads to major discomfort for travellers who will face delays.

I commute by train and remember that Schiphol trains were cancelled quite often because of smoke in the tunnel last year, but I didn't know that balloons were the cause...

Not the answer you're looking for? Browse other questions tagged legal regulations security ams or ask your own question.

17
Is it allowed to bring condoms in airplane?
16
Can I take balloons on a flight?
7
What is the rationale for requiring White House tours be scheduled through a member of Congress?