What is a typical Australian dish which can be considered a “must-have”? [closed]

Even as an Australian, I usually struggle to come up with what a typical 'Aussie' dish is. I think the outdoor barbeque is a well-known past-time, but it is not all that different to an American barbeque.

I had a flatmate who once cooked kangaroo steak with Vegemite in a pan, which I thought would have to be something only an Australia person would come up with. Otherwise, I would consider the Australian diet to be quite multicultural, so I am not really sure how to define it.

As an aside, crocodile meat seems to be the only farmed animal meat that comes from a predator, and I guess along with emu meat can also be considered a uniquely Australia cuisine?

Ha. Before I moved here, I remember my very first time visiting Melbourne, and asking my friends to take me out to an authentically Australian dinner. They said there's no such thing, and we ended up eating Spanish tapas. And over the years, I've come to understand why. Basically, Australian cuisine can be divided into two categories:

And there's a very simple test for this: "can you buy it in a suburban supermarket?" 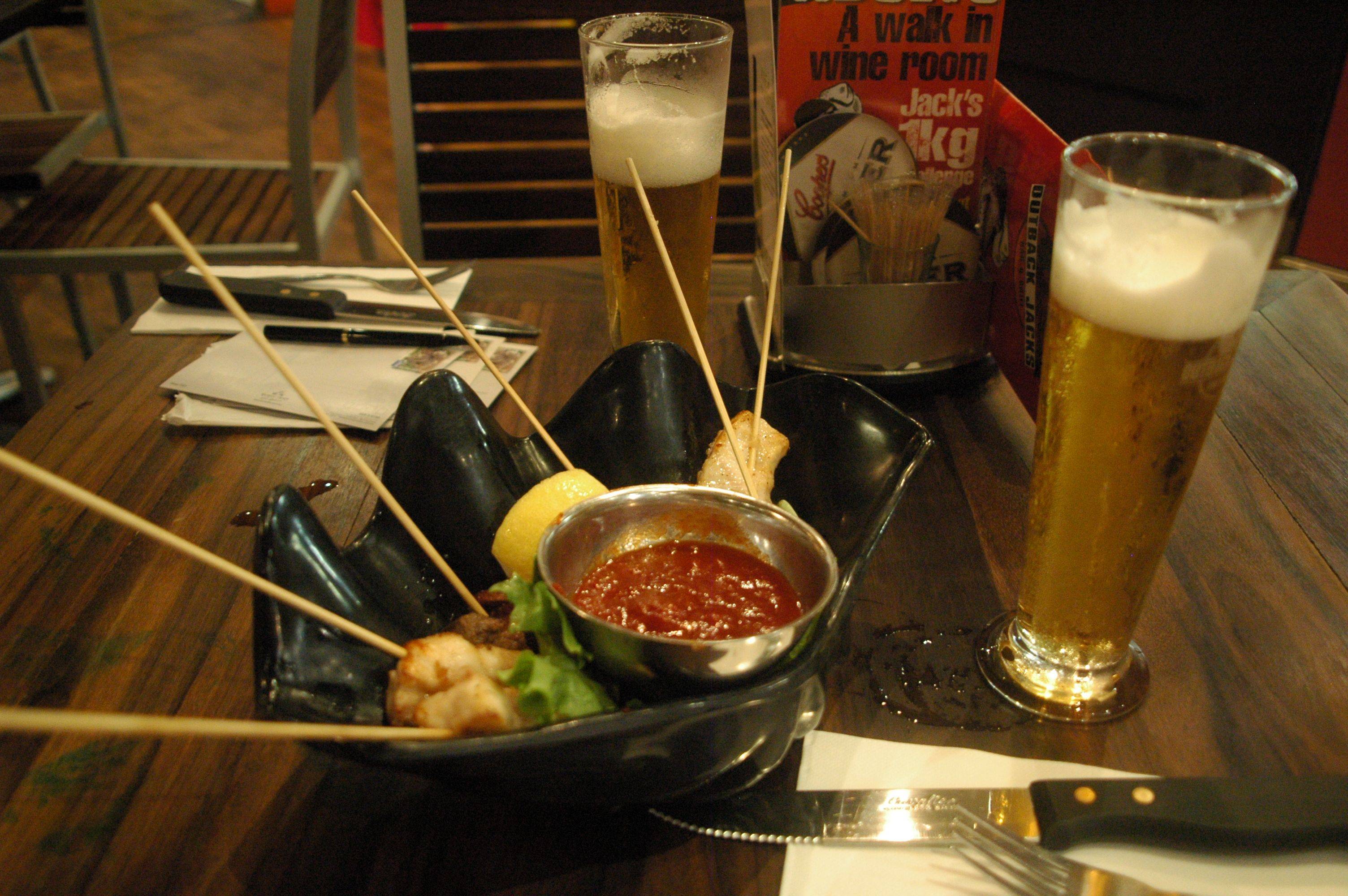 "Skippy Dundee", aka crocodile and kangaroo kebabs, in Outback Jack's, Darwin. If you're eating this, you're a tourist. (Photo by me.)

Crocodile, emu and anything labeled "bush tucker" (witchetty grubs and whatnot) fall squarely into the first bracket. They're never seen in supermarkets, and if you spot them on a restaurant menu, there's probably a plastic crocodile hanging from the ceiling as well.

Category two, what Australians actually eat is, to a first approximation, the same as what you'd get in a British chain pub: both the 'traditional' British dishes (fish & chips, meat pies, bangers and mash, lamb shanks) and the modern imports (pizzas, pastas, generic Asian stir-fries, neutered curries etc). Aside from the odd twist like cramming avocadoes into everything and having fish and crustaceans with weird names (Balmain bugs, anyone?), you're not going to find much unique and exciting on the menu.

Then there's of course "modern Australian", which involves mashing up ingredients and cuisines willy-nilly, usually based on the theory that more conflicting tastes there are the better. The rest of the world knows this as "fusion cuisine" and it's every bit as hit and miss here as it is elsewhere.

About the only crossover item is kangaroo, which is available in better supermarkets, sometimes crops up in steakhouses and non-touristy restaurants, and is worth trying on any trip Down Under. Still, I'd estimate that of the average supermarket's meat selection, you'd get something like 50% beef, 20% pork, 20% chicken, with kangaroo over in the odds and ends section next to duck and turkey, which reflects its popularity pretty accurately. Most roo meat to this day ends up as dog food.

So what dishes are uniquely Australian and actually eaten by normal people then? Aside from the obvious and frankly inedible Vegemite, a few desserts, mostly: pavlova, lamingtons, various slices (basically gooey bricks of sugar), Tim Tams, Anzac biscuits, Cherry Ripe bars, and that's really about it. To be honest, none of them are blow-you-socks-off-spectacular, which why they're not seen outside Australia much (except New Zealand, of course, which also claims ownership of half of them). Except macadamia nuts, of course, which are awesome, but that's why most people think they're from Hawaii. (Sigh.)

Lest all this sound like I'm trashing Australian food, I should end on the important note that Australian meats, fish and produce are usually excellent quality: thanks to strict biosecurity rules and a continent large enough to span most climates, virtually everything is available in season year round and grown right here, instead of being picked raw and imported in refrigerated containers from half a world away. This means that Aussie fruit is great (oh, those NT mangoes!), a simple steak with a few veggies on the side can taste pretty spectacular, and even pub grub is usually remarkably edible. So eat and be merry!

Not the answer you're looking for? Browse other questions tagged australia food-and-drink local-cuisine or ask your own question.

7
What foods must I try while visiting Australia?

8
What is this Israeli street food dish?
5
What Australian dishes - Aboriginal or otherwise - made of kangaroo meat should I not miss?
22
Can you eat food refused by quarantine by Australian border control?
13
What are the typical meals in Japan?
17
How can I find out what the typical “fast food” is for a particular country?
8
What is typical (traditional) Lao / Laotian food?
7
At what kind of eateries can you have a lamb roast in Australia?
2
What is the maximum period for which Australian visitor visa (e600) is granted?
5
Can I stay beyond the “must enter before” date on an Australian ETA?