What would be the closest place to surf to Tbilisi, Georgia?

Being an Australian and travelling a lot, people are always asking me if I can surf - apparently that's a stereotype of us.

So right now I'm on the other side of the world in Tbilisi, Georgia and some locals are telling me it's their dream to learn to surf. But where on Earth would be the closest surf spot to here?

There's no surf on the Black Sea or the Mediterranean. There is some very good but very cold surf in Ireland and Scotland. I think there is some surf off France. But what about in the Middle East or India? I know you can surf in The Philippines but is that any closer to Tbilisi than California or Hawaii?

If you wanted to go on a crazy adventure with a surfboard and a van or hitchhiking out of Tbilisi Georgia, would it be possible to get somewhere where you can surf?

(Flying answers are probably not in the spirit of the question if they involve flying half way around the world.)

There's no surf on the Black Sea or the Mediterranean

There are some nice spots in Turkey. The most famous ones are located on the Aegean Sea. I would be more than surprised if there was no surfing spot in or around Kilyos, a suburb of Istanbul located on the shores of the Black Sea.

I do not want to lure the readers away, but I would ask the question on the Turkey Travel Planner Forum, which is an excellent resource on Turkey ...

On the Russian side, I would have a look at Sotchi. But I do not know if it is easy to get there overland from Georgia.

Caspian Sea is quite good for surfing. My hometown even holds competitions on kite-surfing. The best time for this is in August and September. Later is bit dodgy as waves are really high and water is cold. So I would advice to go to Makhachkala.

N.B. Be careful nowadays it’s not the safest place in the world :(

I once read an article in a surf magazine, maybe Surfer's Path about surfing the Black sea coast line around Sinop.

I've been to Black Sea coastline in the winter. There were nice waves.

How about Tel Aviv? I've seen plenty of both surfers and windsurfers there during my stays. Some magazines even place it as one of the top cities for surfing.

Getting there over land is nigh impossible, but you might have some luck getting a ferry from Turkey to Cyprus and from Cyprus to Israel. 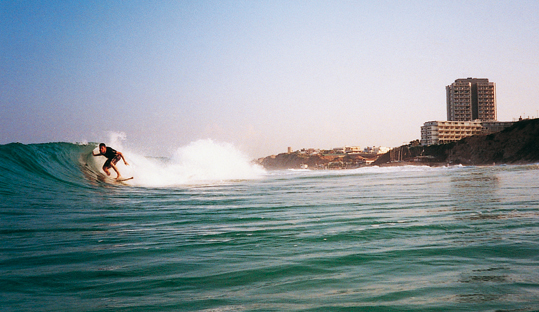 Not the answer you're looking for? Browse other questions tagged georgia-country adventure geography surfing or ask your own question.

25
What would be an example of a currently possible overland route from Europe to Israel?

10
What are the bus (coach) connections from Thessaloniki, Greece to Tbilisi, Georgia?
13
What's the easternmost place in Asia?
9
How to find “night and day” decongestant for a head cold when there's a language barrier?
21
What was this ruined building in Tbilisi, Georgia that is Greek property?
7
Where is the closest free beach where free camping is permitted to Georgia, the country?
5
What are good and cheap places in South America to surf?
11
Hiring and buying used bicycle in Tbilisi, Georgia
1
Indian residing in Tbilisi, Georgia visiting Turkey
5
Georgia/Tbilisi restaurant etiquette