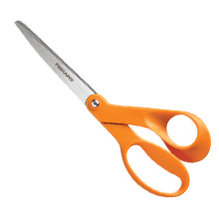 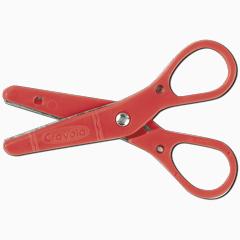 While non-metal alternatives are available for some supplies, it's not possible for all of them (bamboo needle?) I'm hesitant to put them on carry on because sometimes crafts can be elaborate, delicate, or too time consuming for the standard throw-toss-kick treatment of luggage on some airlines.

I'd like the question to be as generic as possible (I'm a US traveler).

Also, would it be permissible to do simple crafts such as sewing, knitting, or crochet while aboard the airplane?

The TSA website has a full list of items prohibited from air travel, broken down by carry-on and checked luggage.

Scissors with blades shorter than 4 inches are allowed.

There is no mention in that list of sewing or knitting needles; I've flown with a small sewing kit in my carry-on bag before and it wasn't a problem at all. The closest category I found for knitting needs would be tools, and if they are 7 inches tall or smaller, they're permitted in carry-on bags. I'd say you'll be fine; I've seen people knit on planes without any trouble, too.

I imagine the glue for your glue gun would need to go in your liquids bag and be small quantities (per the 3-1-1 rule). If you bring a glue gun, I would take the precaution of putting it in a tray separately (i.e., outside your bag and visible) through the x-ray scanner and mention to the TSA agents that it's a glue gun. (It will look "suspicious" on the screen.) It's quicker than them taking you aside and searching your bag. However, I don't think it'd be very practical to do any crafts involving hot glue on a plane, though many planes have outlets in every row. I'm also not sure if there are rules about use of items that generate a lot of heat.

Not the answer you're looking for? Browse other questions tagged usa airport-security or ask your own question.

19
Can I take knitting needles on an international flight?

26
Travelling with beach sand in carry-on
20
Carry on cheese grater on domestic U.S. flight?
9
Visiting the housing projects in New York City?
4
Bicycle helmet and backpack as carry-on in the US?
3
Can I have my vaporizer in my carry on?
5
Can I carry DIY electronics to a plane?
1
Can I bring an inkjet printer in my carry-on?
6
Should I put a compass in carry-on or checked luggage?
3
Can I bring gold sheet face masks in my carry on?
2
sturdy, metallic chess clock as carry-on baggage