What is the best way to get from Antwerp to Calp in Spain by train?

Calp is a pretty small tourist/fisherman's town in Spain, not far from Benidorm. I have spent 21 of my 23 winters there up to this point. A few years ago, I developed a fear of flying after a few rather turbulent flights and we (me and my parents) started going there by car. We usually take one of these routes (we don't actually start in Antwerp, but it's only a 10 km difference on a 1700 km distance):

It's a 2 day trip by car and only half a day by plane (including transit to and from the airport), but I'd rather take a long train ride there than a short plane trip. What are my options if I want to take the train?

Until quite recently, one option would've involved a night train. However, with the opening of the high speed line across the French-Spanish border, and the associated through TGV trains, the night trains no longer run between France and Spain. It's basically just daytime TGVs or local trains

Your journey will be largely similar to one starting in the UK, so you can get an idea by looking at the Seat 61 page on trains to Alicante and Benidorm. You'll also need to get from Antwerp to Paris to catch the onwards TGV to Spain. Easiest and quickest would be Thalys, see the Seat 61 France to Belgium page for more.

Basically, though, it's going to be a two day journey. One option is:

Note that this answer was written in 2014. Since then, most night trains in western Europe have been discontinued, so the connections mentioned in this answer may not be available. As of 2017, it's likely that there is no longer any viable train option that allows you to travel at night, but I haven't checked what services remain in operation and what their schedules are.

Other answers show that with daytime trains you can just barely make it in one day if you drive the last leg from Valencia, or you can have a layover in Paris or Barcelona. The former Ellipsos train-hotel service between France and Spain was discontinued in December 2013 when the high-speed train line was opened.

However it is still possible to leave Antwerp in the late afternoon, cross France by a night train, and make your way to Valencia or Alicante where you can catch a regional train or bus or drive to Calp and arrive in the evening. This is rather long (more than 24 hours), but you save a hotel night. Your night train options are:

From Valencia or Alicante to Calpe, you can take a TRAM train or an ALSA bus. I can't seem to find a train schedule online. There is a direct bus from Valencia to Calpe taking 3 to 4 hours, with 9 services during summer weekdays; note that the last bus leaves Valencia at 18:00. From Alicante the bus takes 1½ to 2 hours and the last bus also leaves at 18:00.

I haven't researched bus options to cross France. They'll probably be slower but cheaper than the train.

If you really want to make it in one go it should be possible.

According to Eurail the fastest itinerary you could follow from Antwerp-Central to Valencia-Terminal is the following. 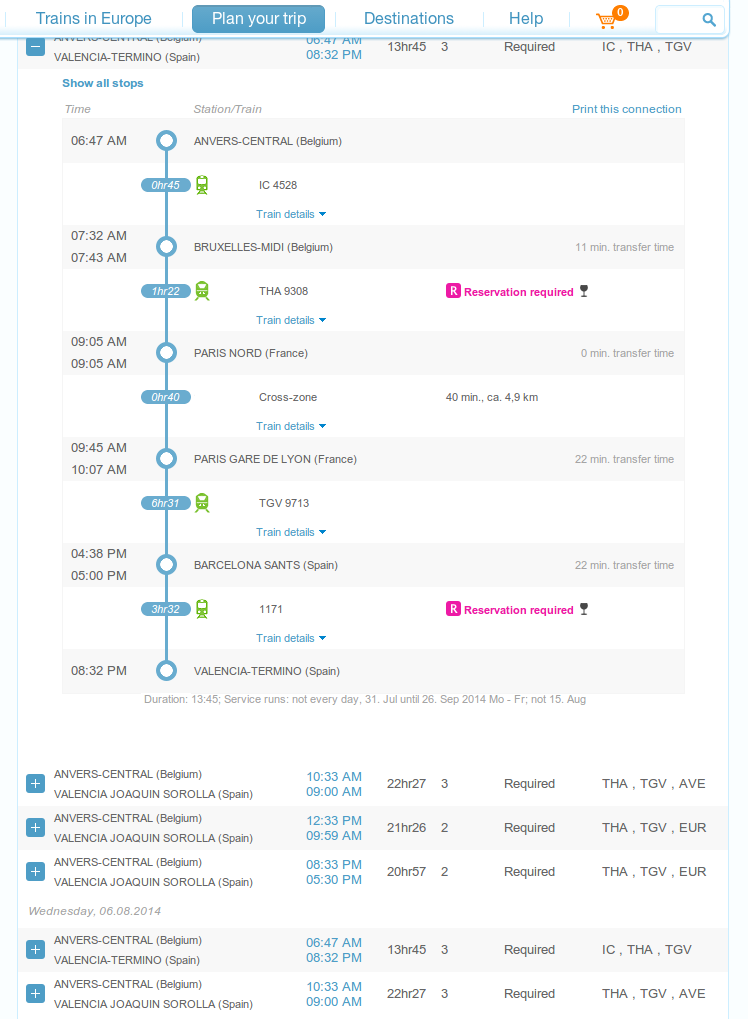 With this itinerary it would take you 13 hours and 45 minutes to get to Valencia. You can see at the bottom that this trip can be taken on a daily basis. It doesn't matter what day you would go, you would be departing and arriving at the same time.

At this point you are about 126km away from your destination. This leaves you with a few options.

If you would take the third option you would be able to get to Benidorm by 2:05 am, which would then only be 22km away from your destination. Now again you are left with the options

If you would take the fourth option, you would be able to get to Calp by 10:05am. You could change Valencia Terminal Europa SA, Lugar Muelle Nuevo Dique del Este, 46001 Valencia, Spain to Valencia, Spain and this will give you a different route, but in the end you would still arrive and 10:05am and be waiting/sleeping at busstations for a couple of hours.

This is an October 2017 answer, likely the timings will change again in December 2017, so take it as a heads-up rather than an 'forever answer'.

There is a connection, leaving Antwerp 06:09, change in Brussels (8 minutes transfer time), change in Valence (transfer time just over an hour) and you get to Barcelona at 16:34 that same day. I could not find details for the Spanish part yet but someone who has been in Spain almost every year will likely be able to find the local trains.
Google maps indicates there are several options by bus or combination of different local transports, taking 5 or 6 hours at that time of day.

There is an alternative, with changes at the same stations, leaving Antwerp 09:33 getting you to Barcelona Sants at 19:31.

I would ask someone to drop me off in Brussels rather than in Antwerp, to avoid the one short connection.

I used the German rail planner to find this information, but there are more like the Belgian International site, both of which you can set to your prefered language.

Not the answer you're looking for? Browse other questions tagged trains spain routes belgium or ask your own question.

15
Places to stop off along the Sydney to Brisbane railway?
10
What's the cheapest way to travel from Paris to Madrid by train?
26
What's the best way to get sleep on a train in a sitting compartment?
3
What's the best way to get from the Paddington Station to these London museums?
2
How to get from Antwerp to Breskens by bus (or other transport) but not train?
8
Baggage restrictions on the AVE train (Spain)?
2
Which is the easiest French city to get by train from Brussels?
3
Traveling by train from Savannah GA to Charleston SC