Are there countries other than the Netherlands that support hitchhiking?

According to the Internet, the Netherlands support hitchhiking by placing signs (see picture) in spots that are a good location for hitchhikers. Are there any other countries that have such great support for hitchhikers?

I'm not asking if it is easy in other countries to hitchhike, but I want to know if other governments make some similar effort (like installing signs, legalize hitchhiking or provide official information about hitchhiking) to support hitchhikers. 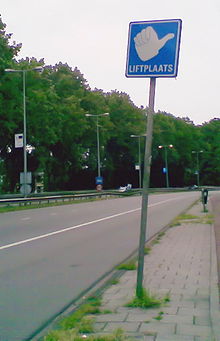 Simple answer: YES. Not necessarily in that there are signs, but certainly there are many hitching-friendly countries. Some people on this site would claim you can hitch in any country.

Hitchwiki is a great site for checking out the 'hitchability' of a country. It has a list of all countries and their ratings for your quick reference guide.

So for example, they would consider Moldova to be better for Hitching than the Netherlands! I'll leave it to you to read why.

Now of course, you have to know the reasons why some are considered good. For example, in Uzbekistan and other ex-Soviet states, it's VERY easy to get someone to stop and pick you up. The problem then is that that car is transformed into a taxi. Allegedly it's because of socialist times helping each other out, and you usually pay a small amount to your new 'taxi driver', who will take you if you're headed in a similar direction.

But because they aren't official taxis (although these do exist) often you then begin a fun dance of 'so...how much? I dunno, how much do you think? Is ... this enough? Maybe?' between driver and passenger. As such, however, it's harder to hitch for free because it's often just assumed that you'll be paying - even a small amount - for your ride.

So after the clarification, you can still use Hitchwiki to check out which countries do have good support for it. For example, Cuba has the Amarillo police, who are there specifically to drive around and enforce the LAW that drivers are REQUIRED to pick up hitchers! How awesome is that!

In France, there are no such road signs, but there are ways to organize hitchhiking.

Many web sites such as carpooling.fr or covoiturage.fr let you express your travel need or find a driver willing to take passengers.

The most obvious support from government is to not forbid hitchhiking.

Another form of support is through the promotion of car pooling by governmental organizations as a way of commuting (ref. ADEME(fr)(en by Google)- Agency for environment and energy control). But this is not exactly hitchhiking.

I have done hitchhking in Belgium (Ardennes) without much problems.

There are no official signs. Btw, I also didn't see them in the Netherlands (and I live there).

For the netherlands: I see regularly people hitchhiking, good places to stop are gas stations (especially along high ways, but you have to get there by car first). From there you can go almost anywhere. Make a sign helps and there are a lot of such stations and the road network is like a spider.

In Israel hitchhiking (Tremping) is pretty common, though I would not recommend it for tourists. There are specific spots to stand and get a Tremp around most cities. In Jerusalem they are in Gilo for heading to Gush Etzion and up near Pisgat Zev for heading north.

I've hitchhiked in 7 countries on 3 continents. In my experience, far and beyond the best place to hitch was New Zealand. I spent a year hitchhiking in NZ-- not only was there no stigma against it, but I was encouraged by many Kiwis. It was so accepted that in many cases I had to "wait in line" at the edge of town for other hitchhikers to get picked up before I could stick my thumb out. More than once, someone saw me hopping out of a car with my backpack, saying my goodbyes to the driver, and they'd come up and ask "Are you hitchhiking? I'm heading to [city/park/attraction], want a ride?" Heck, even if I stood by the side of the road without my thumb out, people pulled over to ask if I wanted a ride. A++ would hitchhike again!

Not the answer you're looking for? Browse other questions tagged legal hitchhiking countries or ask your own question.

4
What (semi-)official hitchhiking spots exist in The Netherlands?

25
How many countries are there in the world to travel to?
5
Are there any "Fantasy Passports" that are recognised by other countries?
4
What (semi-)official hitchhiking spots exist in The Netherlands?
12
Besides Arab/Muslim countries re Israel, are there other countries which don't recognize passports of any other countries?
18
Are there any countries where modern devices that take 100-240V AC power won't work?
19
What are the two closest countries that do not share a border?
8
In which developed countries (other than the US) does the price tag not usually show the final price to be paid?
14
Which are the non Schengen countries that allow entry for Schengen visa holders?
17
Are there countries that are known to place their stamp at the end of the passport?
9
Are citizens of anywhere other than mainland China eligible to unfettered travel in Tibet?