Is there a standard power adaptor to use on airplanes?

For international flights of 12-15+ hours, do the planes usually have AC power available in Economy? If not, is there a standard "airplane power adaptor" that can convert the DC into AC to power a laptop or other electronic item? Is this the same type of adaptor that you can use in cars, or is it a different plug type on an airplane?

When power outlets were first installed on airliners, they used a special adapter called EmPower, which looked like this: 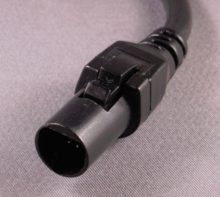 The airlines obviously thought that frequent flyers would be happy to buy a new kind of adapter for all their gizmos. This turned out not to be entirely true... nobody wanted to buy these new stupid adapters, and the airlines eventually realized that it wasn't going to work.

So they are now installing "normal" power outlets... often special receptacles with all kinds of holes that can handle just about any kind of plug, US, European, or British. If they already installed the EmPower thing, they're regretting it and replacing it with standard receptacles as fast as they can.

There is no standard rule to decide if your flight is going to have power, except for the following vague rules of thumb:

The canonical way to find out is by finding out the exact aircraft you'll be flying on, and looking it up on SeatGuru to see where the power outlets are and whether they are EmPower or AC. Most airline websites will also have details on where power is available.

Air Canada has power in economy. It is a standard North American plug. There was a brief time when in-air power required a special airline-only adapter, similar to the way headphones had that strange two-prong plug. But I think these days if there's power it will be a "normal" plug for that airline. The only adapter you are likely to need is one you would use anyway in the country you're heading to.

After reading Joel's answer I realized that the plug is a little more complicated than a North American plug (though my stuff fits in it fine) and found this picture: 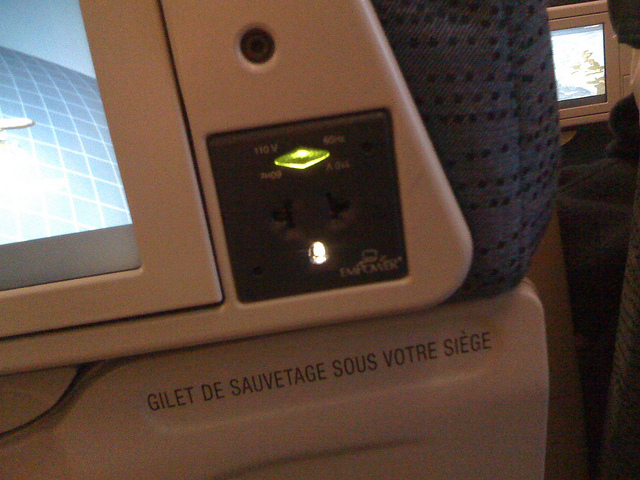 Perhaps most European devices could also use this plug.

I haven't flown an airline offering power in economy, but Apple offers an Apple MagSafe Airline Adapter, so I guess that the answer to that part of your question is yes, otherwise apple is lying. Seatguru.com offers insight which airline offers in flight power, but I could not find one that offers power in economy.

I have seen power outlets offered in economy a few times. Most recently on a UK to US flight with United. Also, on some internal flights. The sockets took US plugs and delivered something that my laptop power supply was happy with: probably 110V 60Hz. Fortunately, most laptop and other portable device power supplies are quite tolerant these days. If something bad came out of the socket then I hope that the power supply would lay down its life for the device it served. I had a power block with me but power was so easily available for the whole trip that I never used it.

Not the answer you're looking for? Browse other questions tagged air-travel gear power electronic-items or ask your own question.

35
Is it safe to charge my laptop in an airplane?

11
Step-down transformer that actually works?
6
What external batteries can I get to charge a tablet during long road trips?
5
Power supply stabilizer or inverter for use of European laptops in Laos?
18
Are there any countries where modern devices that take 100-240V AC power won't work?
6
Finnair power sockets
6
Power plugs in Sri Lanka
3
Is it normal that a socket only gives electricity when the plug is plugged in one way?
28
Issues powering a US laptop in Europe, via an adapter
31
Airline power sockets shut down when I plug my computer in. How can I avoid that?
4
Power Adapter for Traveling to Scotland (I live in the US)