Why is Nynäshamn a de facto “port” for Stockholm?

On my last trip to the Baltic, the cruise ship docked at Nynäshamn, about an hour's drive (each way) from Stockholm. To get ashore, we had to use a tender boat, which took up even more time. Apparently, a lot of travelers to Stockholm get there this way.

Is Nynäshamn a better port? Is it much cheaper to dock there than in the capital city? Or is it an important tourist attraction in its own right that should be given equal attention with Stockholm?

In fact, Nynäshamn certainly is not the "de facto" port of Stockholm, even for international cruise liners.

Quote from the Ports of Stockholm authority web site:

The Ports of Stockholm comprise a number of port areas, of which Värtahamnen, Frihamnen and Loudden, as well as Stadsgården and Skeppsbron are the most prominent commercially. [...]

Värtahamnen, Frihamnen and Stadsgården have extensive ferry services for both goods and passengers travelling to and from Finland and the Baltic countries. Stadsgården and Skeppsbron are the points of arrival and departure for the regular scheduled cruise traffic to and from Mariehamn.

In the summer Stadsgården, Skeppsbron and Frihamnen are the ports favoured by the international cruise liners.

The same site gives a plausible explanation as to why your cruise ship chose to stop at such a remote port (emphasis mine):

Our most southern port – the Port of Nynäshamn – lies approximately sixty kilometres south of Stockholm. Boats transporting both freight and passengers depart from Nynäshamn.

In Nynäshamn we can also receive the larger international cruise liners that are not able to, or do not want to, voyage through the archipelago into Stockholm. In 2010 for example, a number of vessels from the cruise company Norwegian called during May-September.

I think most of them would be able to, because many of the daily ferries to Finland or Baltic countries (such as M/S Viking Cinderella pictured below) are very large vessels too, and they have no problems navigating through the archipelago into the more central ports of Stockholm.

Edit: Well, looking at the map, it's actually quite clear why some briefly visiting cruise ships—arriving from the south—would rather stop at Nynäshamn. They'd have to take a long, time-consuming detour to reach the ports closer to Stockholm (see the maritime routes marked on the map, which approach Stockholm from northeast). 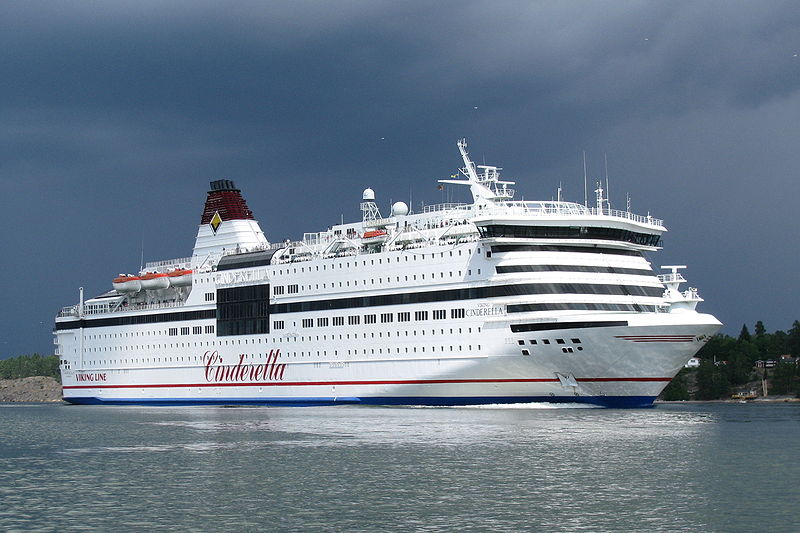 Or is it an important tourist attraction in its own right that should be given equal attention with Stockholm?

Nynäshamn seems to be a nice little seaside town (population around 13,000), but as a tourist attraction it's not on par with Stockholm by any stretch of imagination. However, the Wikipedia article about it claims (no source cited) that it's "a hugely popular destination for Swedes of all ages in the summer months". :-)

According to the Wiki page on Nynashamn, sure, Stockholm is a perfectly good port, BUT:

Several cruise ships on tours in the Baltic Sea also stay in the harbour, because they are too large to go into Stockholm.

However it's important to note that it would appear that's only for the super-large boats. Stockholm is still the main Swedish terminal for Baltic sea cruises, and over 12 million passengers pass through the port every year.

Nynäshamn is a suburb of Stockholm, so calling it a Stockholm port isn't completely wrong.

In addition, it is geographically closer to Ventspils and Gdansk, the main destinations served by ferries from Nynäs, making travel times shorter for those simply wanting to get to their destination fast (especially in the case of Ventspils).

Not the answer you're looking for? Browse other questions tagged sweden cruising stockholm or ask your own question.

7
Newbie snowboarding options a couple of days not too far from Stockholm
8
Stockholm public transport ticket prices for young people
6
Are there public Midsummer's Eve events near Stockholm I could attend?
8
Where in Stockholm do buses leaving for Serbia depart from?
6
Public transit to/from Stockholm Bromma airport (BMA)
3
Transportation options between Stockholm and Skavsta Airport?
34
Why is the Vasa Museum in Stockholm so Popular?