How well does T-Mobile's (US) Simple Choice plan work when in Europe?

I'm about to travel from the USA to Europe. I have a GSM phone and I use T-Mobile's Simple Choice plan. This plan is supposed to mean that I can use the phone in Europe at no extra charge. So far all I have is T-Mobile's marketing spin on it, and of course they tell me that everything is fantastic. I'm wondering how well this works in practice.

I mainly want to use the phone for data access, but I'm also interested in how well texting and calls to/from home will work out.

Has anyone here tried taking a phone with this plan from the USA to Europe? How did it go?

Update: In response to a question in the comments, I'm interested in answers relating to the UK and France. As for partner networks, I don't know, and that's part of the problem. I don't know which network(s) T-Mobile's Simple Choice plan works with. Some Googling suggests that it's EE in the UK and that in France it might be Orange, but I'm by no means certain about either of those.

Roaming in Europe with GSM phones generally works very well. I don't have experience with this particular combination but I have done it across various countries (including France with a T-mobile subscription from another country than the US) and never had a problem placing a call or sending a SMS (I had trouble with MMS but who cares about MMS today?).

I also think data coverage is generally good in Western Europe, although personally I tend to turn it off and rely on wifi networks as data roaming used to be quite expensive. This post on Fodor's travel provides some details applicable to your specific scenario. It also confirms that the main roaming partner in France is Orange. It's the remnant of the historical telecom state monopoly and the biggest network in France so I wouldn't worry about coverage. The main question is what your plan covers and how much it will cost you.

As far as I can tell, what you get for free is 2G technologies and that's quite slow. You have to pay more for “high-speed” data (see the post above, the FAQ on the page you mentioned and also these reports on androidcentral.com and cio.com). Thus, I wouldn't expect much from the free data roaming.

Now that I'm back from my trip I thought I'd add my own answer with details of the experience. All of the following is using an iPhone 4S, unlocked and using T-Mobile's Simple Choice plan (originally an AT&T locked phone).

On landing at Heathrow I turned off airplane mode and my phone immediately connected to EE. I've seen reports that this could take several minutes, but I was online before the plane reached the gate (literally, exactly the same as when flying domestically in the USA). T-Mobile sent me a couple of messages: 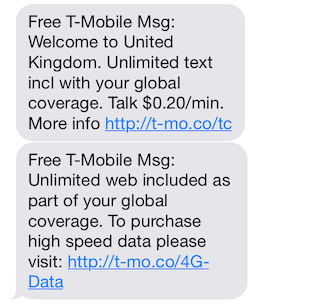 Data was functional but, as noted, somewhat slow. After a couple of days T-Mobile tried to upsell me on a fast data pass, which I decided against.

Partly I just didn't need the faster data, and partly I had signed up for The Cloud, which offers free Wifi access at numerous UK locations. Often when I'd pull out my phone I'd discover that I was actually using Wifi data instead of phone network data.

I stayed the UK, mostly in London with side trips to Cardiff and Milton Keynes. Most of the time I was on EE, though I also saw O2, Vodafone, and Three at times. As advertised, my phone just worked. Calls and texts to my US phone number showed up as fast as usual, and calls to the US went just fine. I did not make any calls to UK phone numbers-- I expect I would have had to include the UK country code, but otherwise I'd expect them to just work.

Usually that was fine, with a couple of caveats:

My verdict: Taking Simple Choice to the UK works as advertised. In some cases local carrier coverage may be less than you'd hope, but that would apply to any phone and plan.

Update: The 20 cents/minute charge for phone calls may not show up until the next month's bill after traveling. The charge applies, but it may be delayed. VOIP options like Skype or FaceTime would of course count only as data, assuming the connection is good enough to use them.

Update #2: On a later trip that covered Iceland and the Netherlands, I had similar results though without anything like the O2 problems I had in the UK. On that trip I ended up buying a T-Mobile data pass to get faster data, but the basic service worked as advertised at all times.

T-Mobile roams onto other T-Mobile networks where they exist, e.g. in Germany (T-Mobile is a German company).

T-Mobile owns 50% of EE in the UK, and all T-Mobile customers (from any country) roam onto EE when in the UK.

EE in the UK is a major network with coverage nearly anywhere you're likely to go. The only places you're likely to struggle for a signal are in rural areas (especially hilly ones), which might include being on long journeys.

I used this plan on my Nexus 4 in Israel, Germany, and Greece this summer. I used it mainly for data, with some texting and voice calls (though at 20 cents/minute, I kept voice calls to a minimum).

It was not perfect. Sometimes I had to manually scan for networks and get it to register on a different network (because automatic registration failed). Sometimes it would appear to be connected to a network but did not actually have Internet connectivity. However, overall I was happy with the coverage.

Speed-wise the data was not fast, but was perfectly adequate for email, browsing, maps, IM. But it did not allow me to download files (e.g. PDFs) from my phone browser. Trying to download files would take me to a T-Mobile My Account page. This was very inconvenient when I was trying to get PDF maps, restaurant menus, etc. (It did allow me to retrieve email attachments.)

Just got back from a month in England, France, Belgium, Netherlands. Texting worked perfectly; phone was fine at 20 cents/minute (though when wifi is available, Google voice is 1 cent per minute); the data at "2G" made me long for the old days with my dial-up modem (56k): typical speeds I got on the free international data roaming plan were 10 to 15k (not Mbps, but kbps). In other words, worthless for browsing web, intermittent for email. After about 20 calls with TMo tech support, they kindly gave me a complimentary high-speed data package upgrade. This fixed the problem, for the most part. In brief: don't believe the hype about data, but the calling and texting is great and free or cheap.

My wife and I spend two weeks in Rome, Sicily, and Malta in April 2018. Our experiences were different. She has a Nokia 950 Windows 10 Mobile and I have an Alcatel Revvl 5049W Android 7. She had good coverage with consistent 2G coverage and had no trouble sending and receiving text messages. I had less consistent 2G coverage and could receive but not send text messages. Twice I tried to make a call but only one call connected. The difference was the radio bands. Her phone was a premium phone with a lot of radio bands while mine was a $150 bargain. When I went to the settings screen showing available networks, her list was different than mine. Since Wi-Fi calling worked great for me, I called T-Mobile and asked. They told me which carriers I should see but I did not have them in my list. My wife had them in her list.

Bottom line: if your phone has the radio bands, your texting and 2G coverage in Europe will be good enough that you should not need to purchase anything else.

Used it in Fiji (bad), New Zealand (mixed, okay in urban areas not a lot of coverage in the outback), Australia (very good in Sydney), Singapore (okay) Thailand (very good in Bangkok), Germany (mixed, depending on where you are).

Not the answer you're looking for? Browse other questions tagged europe cellphones data-plans roaming or ask your own question.

4
Simple phone for US-only use: GSM 850/1900, or CDMA/IS-95?
7
What is the best way to get temporary smartphone data service across multiple countries?
2
How does data roaming work with prepaid SIM cards in Europe?
3
Seeking advice on getting a SIM card in Europe primarily for GPS use
3
Cost for senders when receiving texts in Belgium on a US or Belgian SIM card
1
How can I get 4G LTE (or equivalent) for my laptop in Germany?
1
Can I travel to Europe and buy a SIM from a local carrier and use that in my Nokia Lumia 1520 phone?
6
Access to USA mobile network from euro phone