Are foreigners targeted in the Xinjiang / Uyghur related violence in Western China?

Recently here has been a fairly steady occurrence of violent events in Xinjiang or attributed to separatists from Xinjiang in other parts of the country.

Perhaps the biggest or most known took place in Kunming, Yunnan a few months ago - a few months after I spent a week there. Another was in the news in Xinjiang itself just yesterday.

I have heard that part of the Chinese government's response includes promoting tourism to Xinjiang, at least of Chinese citizens if not for foreigners.

But I'm wondering how safe it is for foreign / western tourists. Obviously in a restive place there's an increased chance of being in the wrong place at the wrong time, but I'm more concerned with whether foreigners are targeted in attacks of this kind, or if they're directed at Han Chinese, or if they are totally random.

I've been thinking of visiting this part of the world on my next trip. I don't avoid places that are "dangerous" but I do avoid places where tourists, foreigners, or westerners are specifically targeted.

I travelled for 2 weeks all through Xinjiang and talked a lot with University professors and other native Uighur during the Anniversary of the first unrestes, in July 2011.

The issue is that the Chinese Government is trying their best to "get rid" of the Uighur culture there. They want people to live in modern housing, intermingled with Han-chinese people. The old city of Kashgar for example is crubmling to dust because the Chinese government takes over all houses where the inhabitants die or move away, and turn them into a heap of rubble, not allowing anyone else to live there anymore. Like this they destroy the old city house-by-house. You can read more about this here. Here is a photo I took at the time. You can see the crumbling homes clearly. 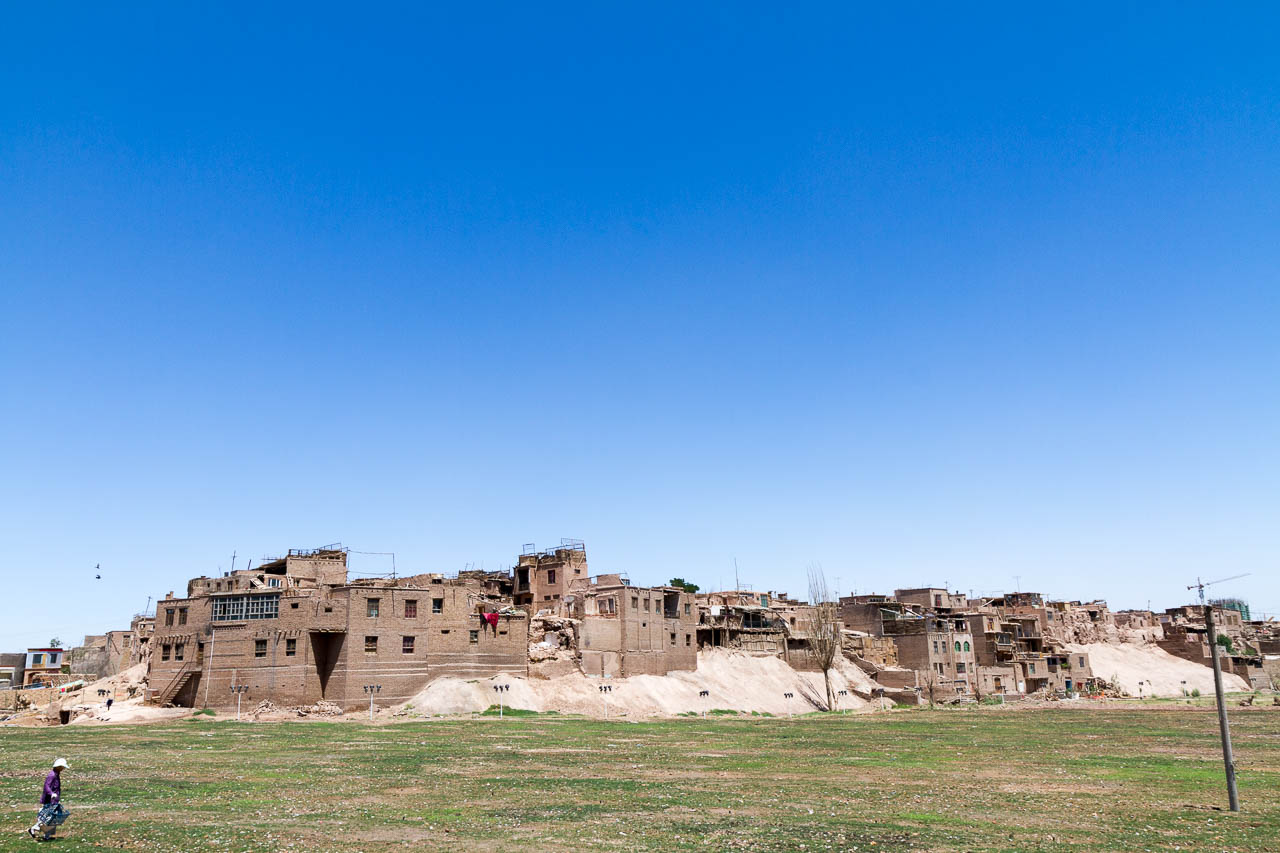 This is only one example of a treatment that turns Uighur people specifically against the Government and Han-Chinese, not at all against foreigners. The reception that I received from locals during my trip was extremely positive and hospitable, specially from people you would simply see in the street (i.e. not people who would expect you to be a source of income in any way).

The risk you face is much more collateral. For example, you are not allowed to even have the tiniest of knives in your Check-in luggage when flying in and out of Xinjiang Airports. Further, the Government is worried that foreigners are actually reporters or do things that would hurt the image of the government. If you are around public places during the June/July months, you can see civilian chinese with batons in groups of 5-10 patrolling the streets. There is police everywhere. You feel much more threatened by those than the locals.

I expect to move to China later this year and visited Xinjang last year. I've been keeping abreast of the news and context.

Based on this, I'd say that, no, foreigners are not at all targeted by these 'terrorists'. In fact, I would suspect they would go out of their way to avoid hurting foreigners, as this could easily backfire in relation to their cause: They're fighting the Chinese government. The Chinese already have a tacit global agreement that the Xinjiang dissidents are terrorists. If they would hurt foreigners, they run the risk of driving those governments into the arms of the Chinese, hurting their cause.

That said, if you're caught up in a sword fight in some busy train station, you might not be spared.

It's true that there's been a lot of issues with security in Xinjiang over the past 10 years or so. There's always been a bit of tension between the Han Chinese people and the Uyghur people, but it wasn't until 2008 when things started to really boil over.

The fact is, however, that as a traveler it's really not a big risk to travel to Xinjiang. Having lived here since 2006, I can tell you that I have never once felt unsafe or in danger. To my knowledge, not a single tourist has ever been involved - directly or indirectly - in any of the conflict that has occurred here in Xinjiang.

To be honest, I think there's no better time to visit Xinjiang - very few tourists means you have the whole place to yourself! And it's cheap ;)

I've did an entire video detailing the security risks and what you can do to keep yourself safe. Check it out: Is it still safe to travel to Xinjiang?

The biggest thing you probably have to worry about is a pick-pocket. But that's pretty much anywhere you travel nowadays.

9
What is the safest way to travel from Hunza (North Pakistan) to Kashgar (West China)?

8
Parts of China that aren't dominated by Han Chinese that are easy for foreigners to access
10
Are Australian citizens now or in the very near future about to get ten year visas for China?
14
Which linguistically Tibetan areas of China are outside the official Tibet borders with the very strict permits/rules?
11
What is the deepest nesting of autonomous areas within other autonomous areas in China? Are there areas that are three deep? Deeper?
7
What are the considerations for doing a short-term (i.e. two month) work exchange in China?
5
What are our options to get a (e-)visa for China as a British citizen in Netherlands while restricting the time without ID to no more than a day?