Are there scheduled flight connections operated with a helicopter?

I know that you can charter a helicopter, it is expensive but possible. But can I go on a scheduled flight with a helicopter? If so, which connections?

Not lots of airports, but lots of rich people:

Heli Air Monaco used to operate a regular flight between Nice airport and Monaco every 30mn. Fee was 105€ from Monaco to Nice and 120€ from Nice to Monaco, or 210€ for both.

Copterline operates a frequent helicopter service between Helsinki, Finland and Tallinn, Estonia. They advertise it as follows:

FAST CLASS by Copterline is the fastest, most efficient way to travel between Helsinki and Tallinn - from city center to city center in 18 minutes.

Ten scheduled flights each workday put you above the inconveniences of other transport, allowing you a full day at work without a half day spent traveling.

With a quick look, one way prices are 89 - 270 €, depending on flexibility and cancellation options. (This is pretty expensive compared to the abundant ferry services between the cities–it's clearly aimed primarily at business travellers.)

Some history: Copterline Oy, a Finnish company, operated a regular and fairly popular service between the capitals from 2000 to 2005. In 2004, for instance, they carried 75,000 passengers. The operations came to a dramatic halt in 2005 when their Sikorsky S-76C+ helicopter crashed into the Gulf of Finland near Tallinn, killing all 14 people onboard. There have been attempts to restart the business over the years, but it seems they only managed to do so in late 2011. (Now the service is run by Copterline OÜ, a different company apparently, which is Estonian but wholly owned by Finnish FastClass Ltd.)

Update (April 2012): I just tried, on a whim, flying with Copterline from Helsinki to Tallinn, so I can now confirm that these scheduled flights indeed take place! This was my first time in a helicopter and all (so forgive me being hyped about it).

There were 8 passengers in total (12 seats) on my flight. The sole helicopter forming the current fleet is an AW139. In Helsinki, the copter leaves from a small heliport in Hernesaari (IATA code: HEN), complete with a security checkpoint and waiting lounge. One must check in 10 mins before scheduled flight time at latest. In Tallinn, the heliport (IATA: CHE) is located adjacent to Linnahall, a strange Soviet-era ode to raw concrete. Service was nice overall; this is certainly very convenient compared, say, to spending 2-3 hours in a packed ferry & terminals.

Some photos I took: 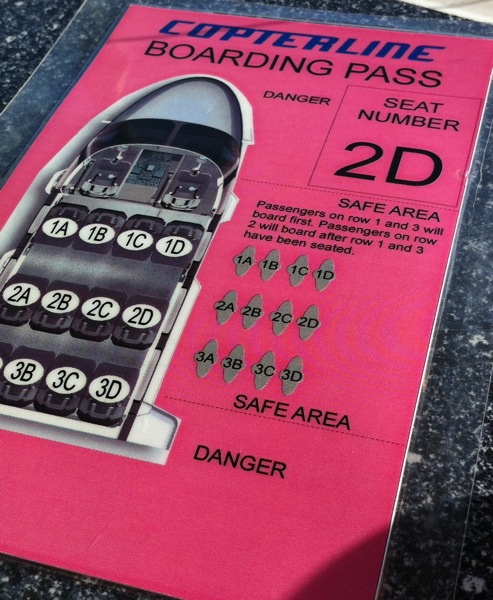 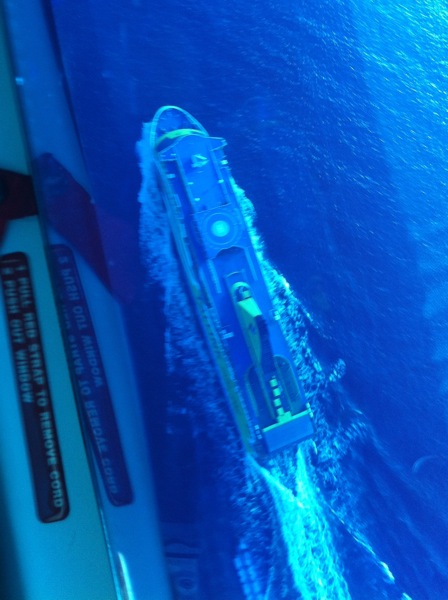 Looking west (the side windows coloured everything blue): 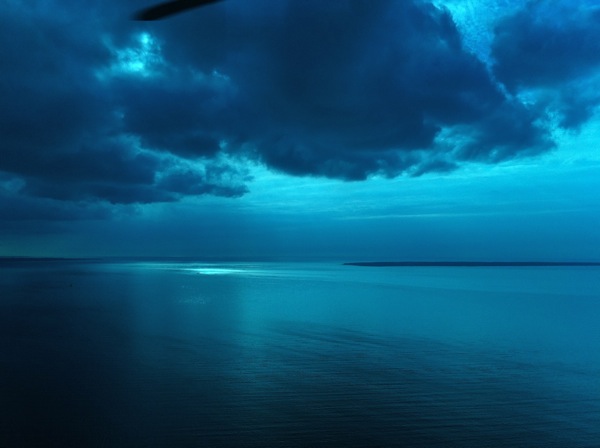 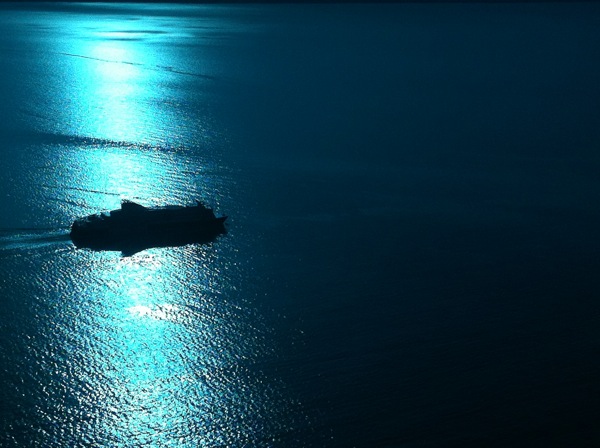 Approaching Tallinn; you can see the heliport on the left: 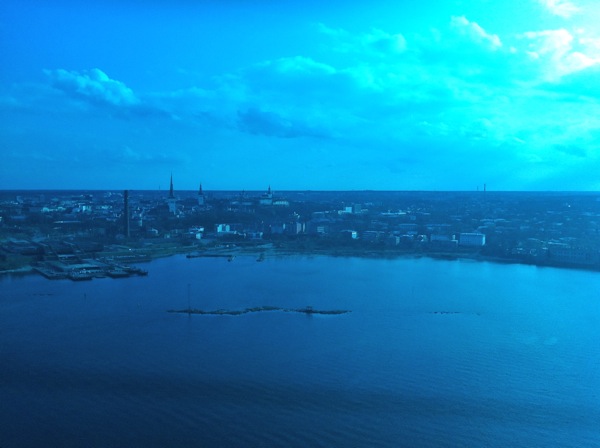 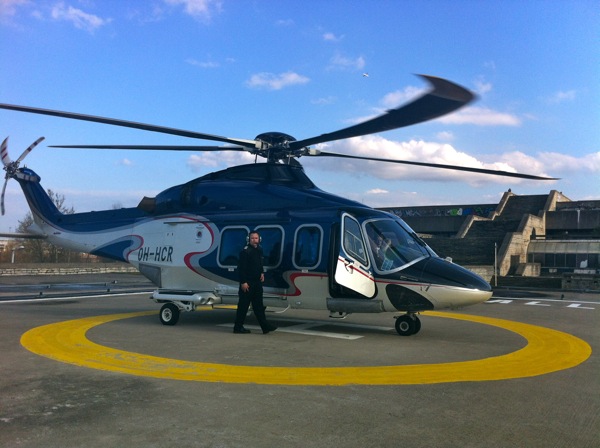 The 18 minutes in the air set me back 169 €, and I'm not planning to make this a habit. (I booked the ticket the same day; might've been slightly cheaper otherwise.) Also, I'm very happy this time there were no accidents whatsoever!

In the past there was such a service in New York. I was booked on it once to get to Newark from LaGuardia and once between JFK and LaGuardia. Both times the weather was "bad" - helicopters set a really low bar for "bad" - and I had to make the connection on the ground. I am not sure if the service still runs but New York, with lots of airports and lots of rich people, is the place to look for it.

A quick search finds this: http://www.newyorkhelicopter.com/airport-transfers/ but I assure you I did not pay $800/person for whatever I had booked a few decades ago.

The Scilly Isles, off the tip off Cornwall, UK have such a service. Further information on the British International Helicopters page on Wikipedia.

When I was in Vancouver earlier this month, I noted it was possible to do a flight from either Vancouver Harbour, or indeed Vancouver International Airport to Victoria, with Helijet. So it's a viable connection there, if pricey - a quick search for a flight next month revealed around $290 one way...

Sky Shuttle flies between Hong Kong and Macau every 30 minutes from 9 AM to 11 PM, seven days a week. Flights take 15 minutes. At HK$3700 (~US$475) a pop, it's not exactly cheap though, especially given that ferries cover the same distance in an hour and cost around a twentieth of the price!

Pity that I only learned about this service, AFTER returning from Morocco :( There is a regular helicopter service between Europe and Africa. INAER offers regular services between Malaga/Algeciras and Ceuta, and that already for 12 years.

I even found two youtube films this one and this one.

The service seems to connect with flights arriving at Malaga airport in Spain, as well as with Algeciras on the Bay of Gibraltar.

There are scheduled helicopter flights twice daily between Værøy Heliport and Bodø, Norway. Flights are operated by Lufttransport. The same company also has flights between the settlements of Svalbard.

There are also many settlements in Greenland where the only form of scheduled public transportation is by helicopter.

12
Are there offline maps for WiFI locations while traveling
1
What's the longest scheduled helicopter flight?

5
Air travel info between Andaman islands
21
Why is a nonstop flight sometimes more expensive than multiple connections?
5
How to tell if two flights are scheduled to use the same equipment when booking?
42
What is the cheapest regular-priced scheduled flight I can book and fly?
15
What is the least frequent scheduled flight in the world?
29
What are the smallest planes running scheduled flights in Europe?
16
What airport has the fewest regular commercial flights?
1
What's the longest scheduled helicopter flight?