How to fly on the new Boeing 787 Dreamliner?

Sooo, the new Dreamliner has had its inaugural flight.

The first flight was from tokyo to hong-kong.

In a bit of competitive fun, a friend and I are trying to beat one another to ride it (he beat me to the A380 - I've still not been on one).

Is there a list of the routes as they open up for it? Not that I'll be able to do it any time soon, but nothing like a bit of forward planning... ;)

This is a list of airlines that have ordered a Boeing 787. So I would look at their flight planes to maximize your chances:

The Jan 2013 spate of Dreamliner problems has led to news articles that include stats about fleet size.

For example, from CBC news,

This Guardian article goes with the same "almost half" factoid and adds,

Read enough of those articles, though, and you'll probably be in a little less of a hurry to get a chance to fly one.

New articles as the grounding continues.

May 2013 coverage of the return to flight reveals more.

Some are starting flights in May, others in June. The routes they are using do not, in general, seem like the routes this plane is needed for, so expect schedules to continue to adjust.

I read on the airliners forum that Frankfurt-Tokyo could be an option starting in january. There are many suggestions on this forum. Since most of the visitors to this forum appear to work in the airline industry, I would consider this info trustwordy.

You can find other suggestions on this forum thread as well.

According to Wikipedia, after 50 pre-orders were cancelled, there are now 797 pre-orders for the 787.

This is spread among 54-55ish (some are unidentified) customers.

Sadly Boeing's website for deliveries only shows delivered planes, and that only includeds the ANA plane for the inaugural passenger flight. Of course as this is updated with more deliveries, it could become more useful and relevant.

Ben Schlappig (Lucky) at the One Mile At A Time blog has posted a few times about award availability on 787 flights. This search should turn up the relevant posts.

His recommendations for flights to look for are Tokyo Haneda to/from Frankfurt from January on ANA, or a little further in the future, Tokyo to/from Boston from late April on JAL.

If you are in the UK, Thomson Airways which is the British arm of their German parent travel company TUI in Summer 2013, will be the first UK airline to get the state-of-the-art 787 Dreamliner. You’ll be able to fly on the Thomson Airways 787 Dreamliner on certain flights to Florida and Mexico from Gatwick, Manchester, East Midlands and Glasgow airports.

The first long haul flight of the Thomson 787 Dreamliner has been given the green light for the second week of July. Passengers heading to Cancun and Florida from July 8th will be the first to fly long haul on the state-of-the-art jet.

You can read much more inc. videos about Thomson's new super jet here

The Scandinavian Airlines - Norwegian has announced its Boeing 787 Dreamliner will be used on flights between London and Oslo this summer 2013. The carrier will deploy the aircraft on the route on Thursdays and Sundays between 4 July and 4 August. The aircraft will also be used on other routes from Oslo to Malaga, Alicante, Barcelona and Nice.

Norwegian currently has eight Dreamliners on order with three to be delivered this year, four in 2014 and one in 2015.

More information about Norwegian's new 787 Dreamliner can be seen here.

United Airlines has begun operating the 787-8, initially on certain domestic flights to and from Houston (IAH). One way to find them is by searching their PDF timetable for the string "788".

A simple way is to search by aircraft type at flightaware. The 787 is called 788/9 for flight planning, so a quick search leads to a nice timetable and map of flights: 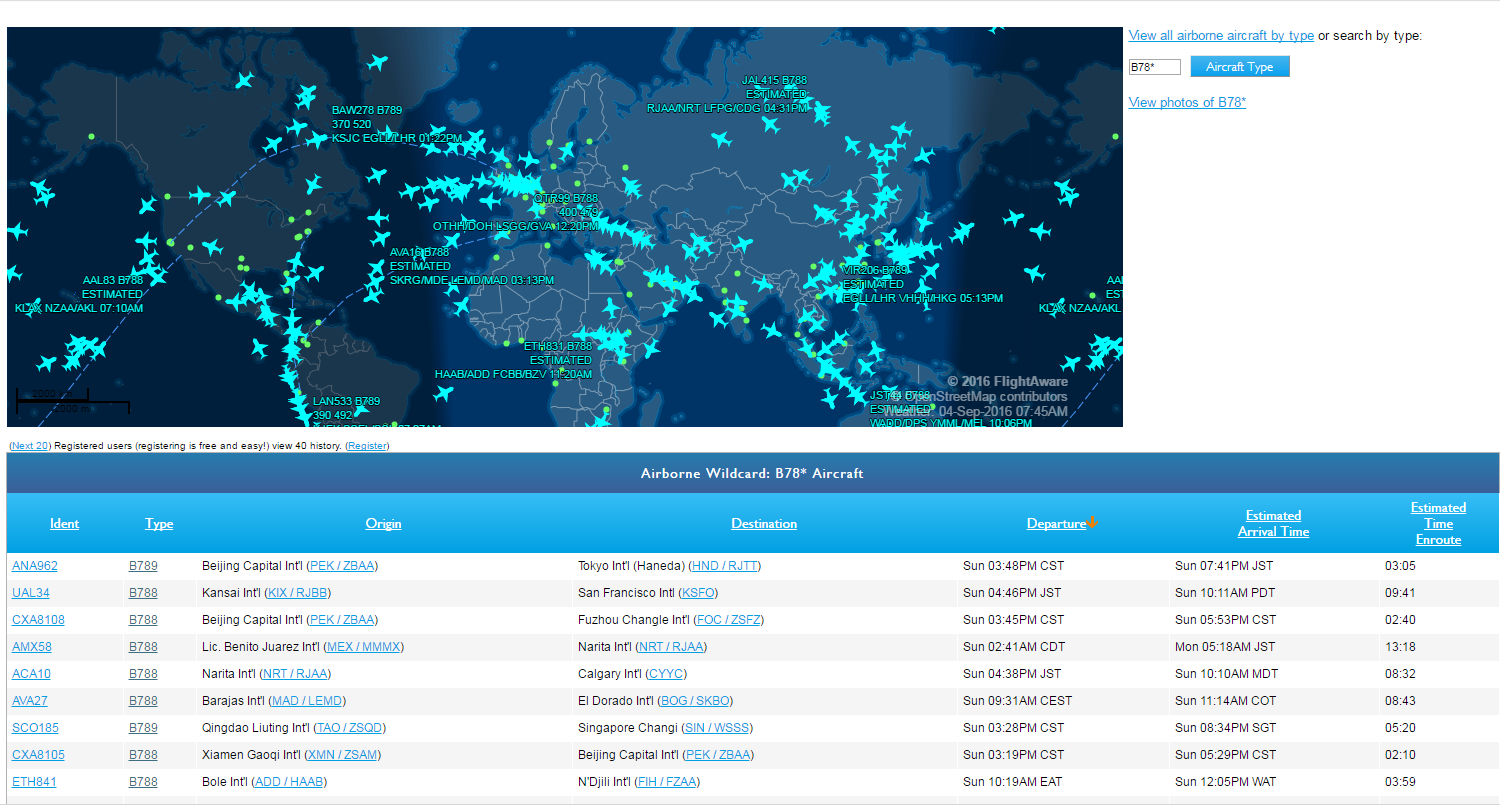 Not the answer you're looking for? Browse other questions tagged air-travel airlines boeing aircraft or ask your own question.