At Heathrow, after collecting your baggage, there are three exits.

Green - nothing to declare

Red - something to declare (not sure of text)

Blue - arrivals from the EU

What is the blue one for? Is it if you have something to declare, and have come from an EU country? I saw no signage to tell me when I was there last week.

You're referring to the three customs exits at Heathrow Airport: 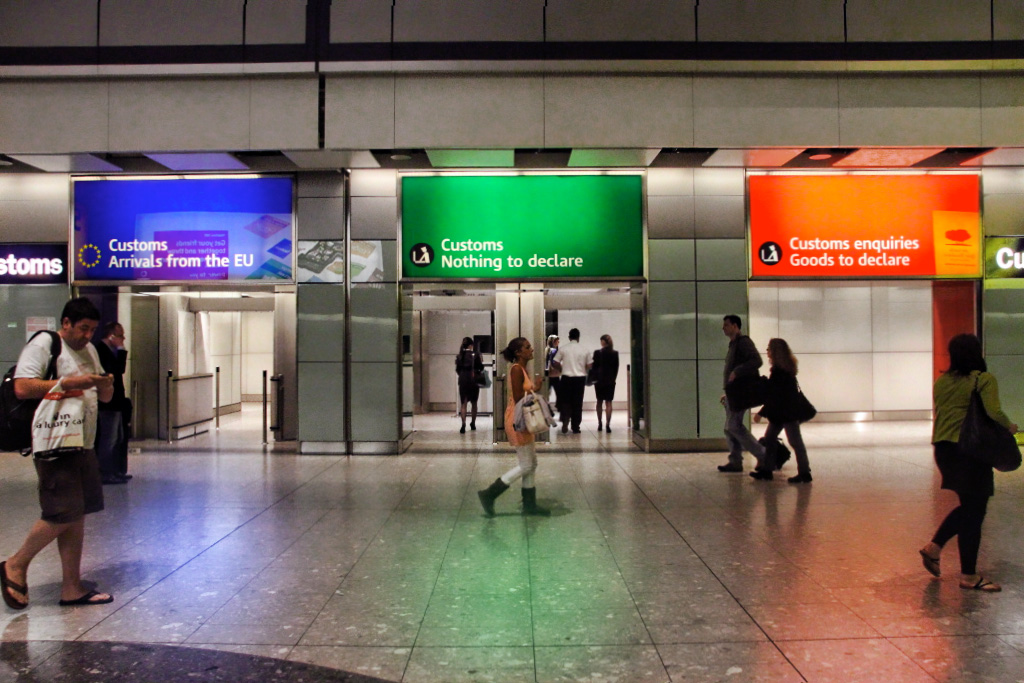 Blue is for arrivals from the EU with nothing to declare. People who can use this queue will see a green stripe around their luggage tag. Yes, this is slightly confusing.

Green is for arrivals outside the EU with nothing to declare.

These are based on the country where your air journey originated.

Red is for arrivals from anywhere who need to make a customs declaration.

The UK has significantly different procedures for admitting people from the EU and from outside the EU. Since Heathrow has the largest amount of international air traffic of any airport in the world, it's important to not make people wait any longer than necessary. Separating them here helps keep the queues moving faster.

The blue channel is for travelers from the EU who have nothing to declare. If you have something to declare you should in any case go through the red channel.

The difference between travelers coming from the EU and other travelers is that some procedures like declaring cash are unnecessary and the limits, e.g. for alcohol, are much higher than when coming from outside the EU. You can basically import just about anything for your personal use. Other EU countries do not offer separate channels, however, and for the system to work it seems you would need some way to make sure that people coming from outside the EU do not simply sneak through the EU lane.

I don't have any particular insights into the reason the UK organized things in that way but the blue channel could be a way to sort out travelers that are less likely to be importing something illegally. Baggage tags from EU airports are marked with green stripes so people who go there by mistake or try to cheat (without being too clever about it) can still be spotted easily.

The only difference I could find between the UK and some other EU countries without separate channels is that in the UK, declaring cash is only mandatory if you come from outside the EU (it's EU law) whereas in France or Germany it's also mandatory if you come from another EU country. But it's not clear to me how this could explain the blue channel.

Not the answer you're looking for? Browse other questions tagged customs-and-immigration lhr or ask your own question.

10
Can I use the Blue “Arrivals from EU” queue on arrival in the UK, if I entered another EU country on a layover?
5
Green baggage tag to non-EU destination
3
On a trip from US to UK with a layover in Germany, at which point of my journey will I go through customs?

5
Airside arrivals area at Heathrow T3
6
Getting from Heathrow to Balham with heavy luggage (mid morning sunday 14 December)
10
Can I use the Blue “Arrivals from EU” queue on arrival in the UK, if I entered another EU country on a layover?
35
How does the US know that I left?
13
Why do some countries require everyone entering to see a customs officer, and some don't?
5
What immigration and customs checks are performed for passengers leaving the U.S.?
3
Traveling through Heathrow on separate tickets with no interline agreement
4
How much of a sense of humor do US Customs Agents have?