Travelling between Japan and South Korea

We are going to Japan for 3 weeks in the beginning of April and would like to spend a couple of days in Seoul. How do we get there? And how expensive is the ferry from southern japan to Busan in South Korea?

You have asked at the right place because I happen to have six brochures with me all about ferries between Japan and Korea and I've done this very trip six times and used most of the ferries at least once! 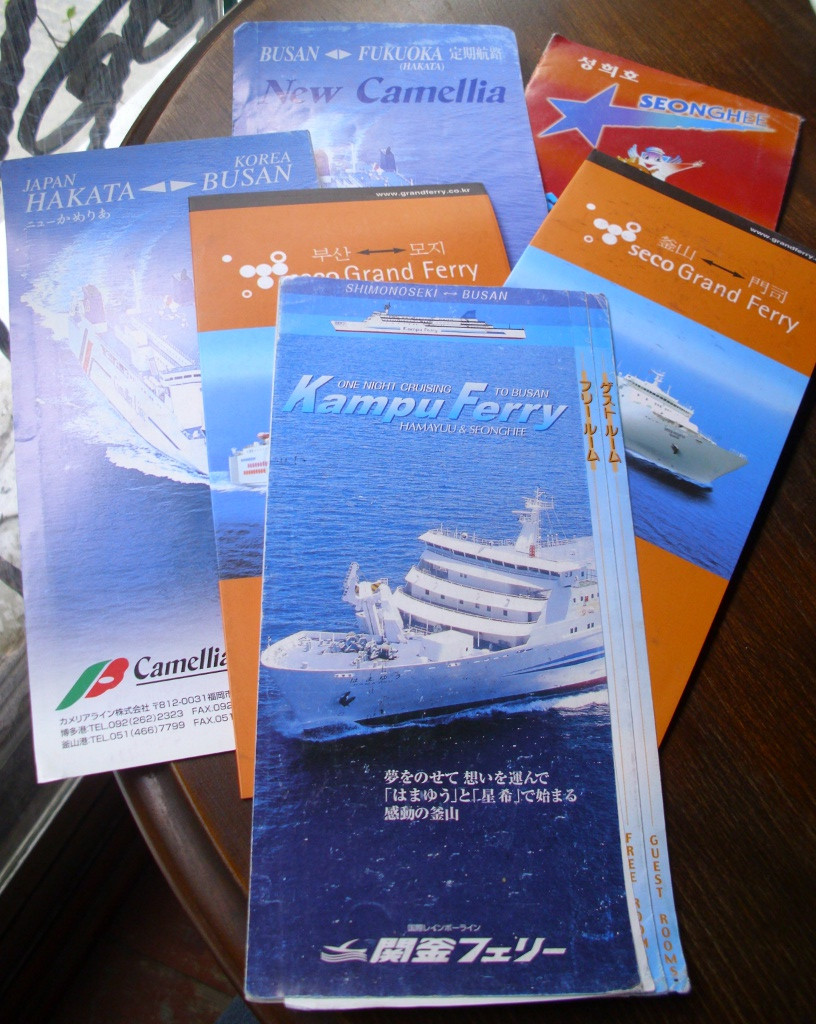 User humphreyb has already told you all about the fast hydrofoil ferry, so I will concentrate on the other (overnight) ferries.

Sadly the Seco Grand Ferry which operated out of Moji has gone out of business )-:

Both ferries still in operation only have sites in Japanese and Korean but there are some indirect sites with English. Don't worry, you can get your hotel or hostel in either country to call them and there have always been English speakers at the ticket windows when I've gone there.

Why would anyone choose the slow ferry when the fast hydrofoil is only $30 to $40 more expensive?

You can pay with credit card for the ticket in either country but there will also be some annoying terminal fees which must be paid in cash! I have been caught out twice and had to run around looking for an ATM! I believe all the ferry terminals have a currency exchange with fair rates.

It is very wise to have some currency ready for when you arrive at the other side since credit cards and even ATM cards have some unexpected problems in both countries. I once had to walk from the Hakata port to downtown Fukuoka because I couldn't get bus money!

You will often see Hakata, which is the name of the port of Fukuoka. As far as you are concerned they are the same place. Shimonoseki is small and only has one name.

Fukuoka is about 100km further south than Shimonoseki, so further away from Tokyo if that's where you're coming from / going to.

Fukuoka: ACROS on the left, Canal City on the right:

Second class (dormitory) on the left, communal bath on the right:

This ferry runs out of Hakata, Fukuoka in Japan, the same terminal as the place the hydrofoil runs out of. It runs out of Busan, South Korea, the same as all other ferries to Japan.

NOTE both the brochures and the websites differ on the Busan to Fukuoka details between the Japanese and Korean versions!

This ferry runs out of Shimonoseki, Japan. It runs out of Busan, South Korea, the same as all other ferries to Japan.

You might be able to get a student discount at the counter.

Trains from Busan to Seoul

Korea has several levels of train service and the slowest ones are much cheaper but still very modern and comfortable and still pretty quick. The ones I noticed going to Seoul last time I was in Busan were KTX, Saemaul, and Mugunghwa. But you might find the other types also when you get there.

The various kinds of trains have different ranges of classes which may includ unassigned seating tickets as the cheapest option. I always take the Mugunghwa as it's cheap even on a backpacker budget, I'm usually not in a hurry, it's comfy enough to fall asleep on, and it's not any slower at 5 hours than the Saemaul.

Here's an idea of times and prices in decreasing order of price for a single adult:

Trains for the Japanese ferry terminals

Both Shimonoseki and Fukuoka are well connected by train to all of Japan.

There is a short walk between the Shimonoseki terminal and the train station, mostly on an elevated walkway. You might want to take a taxi if you have lots of luggage.

There is a bus connection between the Hakata/Fukuoka ferry terminal and downtown Fukuoka. You will need Japanese cash for this bus! Beware that Fukuoka has two centres so make sure you know where you're heading depending on whether you're staying there or going straight to the train station.

Ticket counters in the Busan ferry terminal. To Shimonoseki on the left, to Fukuoka on the right: 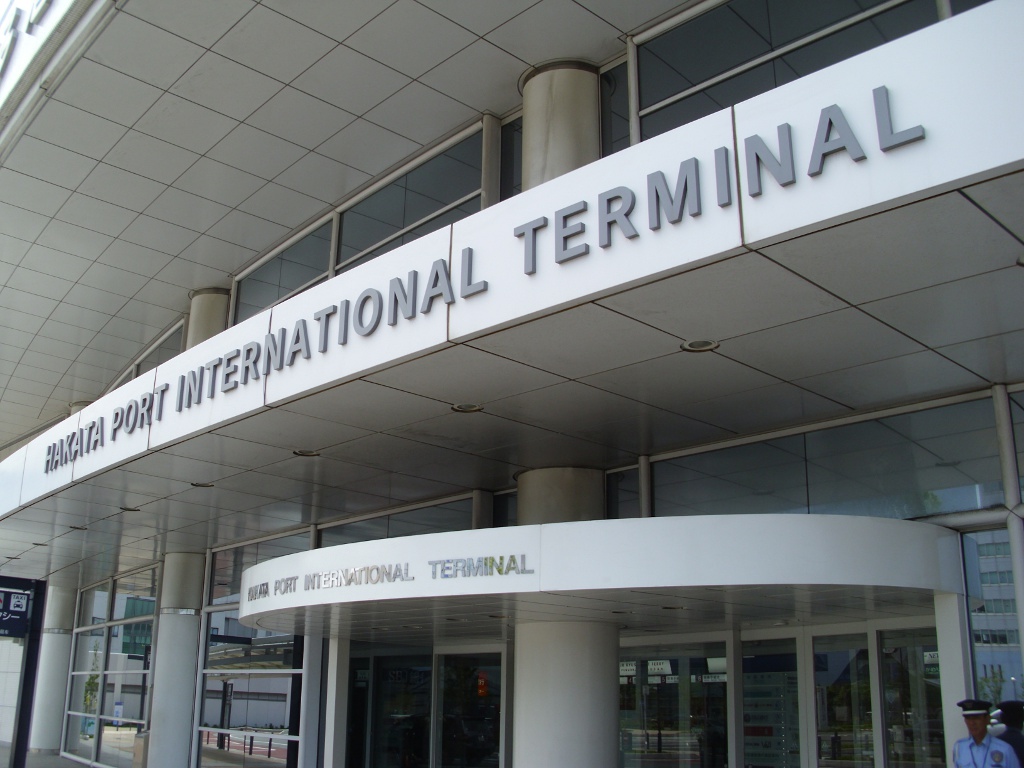 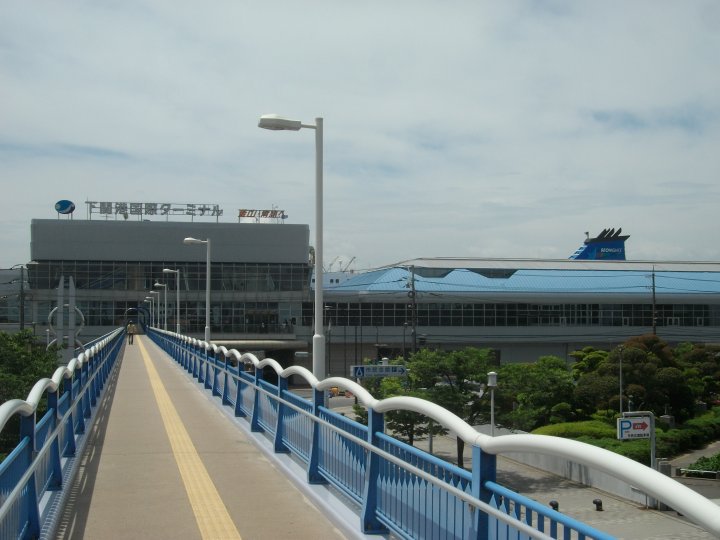 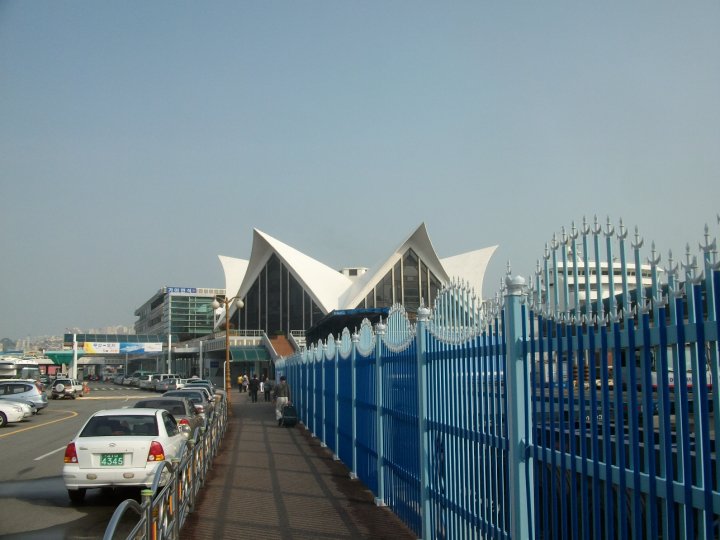 NOTE these are not the only ferries between Korea and Japan

If you follow some of the links above you will see also ferries to Osaka but they take more time and seemed to be less regular, more like cruises, more "romantic", and harder to work out the exact details for.

(I cannot find information for some details, or I have conflicting information. If you know the actual details for anything marked "??" then please edit this answer to fill it in)

You can get a Hydrofoil between Fukuoka and Busan. It costs 13 000 yen per adult one way and takes about three hours. A few leave each day but you will need to book ahead. You book online and when you check in you'll need to show the credit card you used to pay for it, or some other proof of purchase. There is also a 1 500 yen 'fuel surcharge' payment when you check in. I took one three years ago and had no dramas. However I had to book months in advance as it was the holiday season. 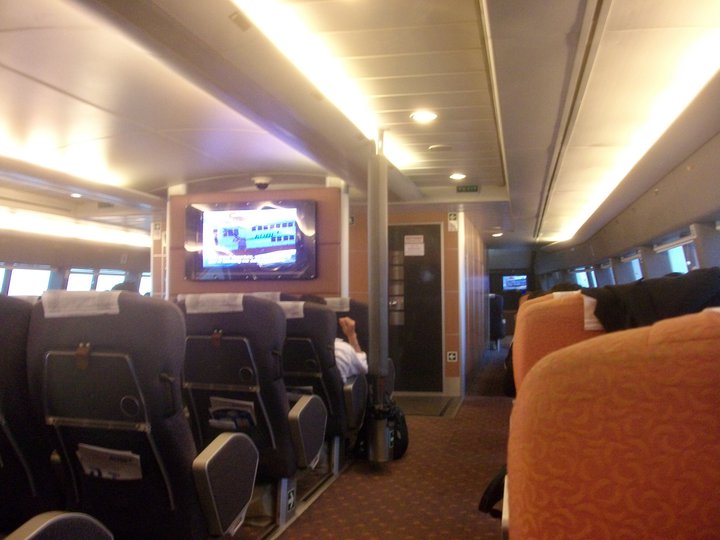 You can also get a ferry from Shimonoseki to Busan. It's a bit cheaper, however it is about 10 hours and the website isn't in English.

Once in Busan you can get to Seoul by taking an 'Express Bus'. They are very cheap and run frequently. No pre-booking is required.

here is a transportation tip in Korea. If you are planing to visit Korea from Japan by ferry, and move to Seoul area from Busan, taking KTX(train) is better than taking a bus. You can save your time and KTX is the fastest way from Busan to Seoul. Seat is convenient and you can buy some food in the train. Also if you are with friends you can buy a save pass too. If you have this pass, you can take any KTX everywhere you want to. And there is express train between Seoul station and Incheon International Airport so if you are going to the airport, you can take this train. Thanks.

Not the answer you're looking for? Browse other questions tagged transportation japan ferries asia south-korea or ask your own question.

6
How can I travel to Japan from mainland Asia by ship?
9
Is advanced booking required for ferries from South Korea to Japan

9
Is advanced booking required for ferries from South Korea to Japan
9
South Korea vs. Japan. Which gets cold earlier in autumn?
4
Jjimjilbang in Korea
6
Is it possible for a US citizen to apply for a visa for Japan from South Korea?
7
Can I travel on JR Beetle to South Korea and stay for a week, on a 3 month Japan visit
1
How safe are ferries within and travelling from Korea?
9
How to travel by sea (ferry / boat / ship) between China and South Korea
1
Indonesian with Japan visa travelling to South Korea
2
Is there now, or was there a few years ago, a ferry from Busan, Korea or Shimonoseki, Japan to China?