What are the safety benefits of life rafts on planes?

What are the safety benefits of life rafts for passengers? If Qantas did remove them for the flights envisaged, how much of an impact would it have on passengers' safety?

air-travel safety qantas
Share
Improve this question
asked May 25 '14 at 8:14

First, to clear what do they mean by rafts, we have three different things here: 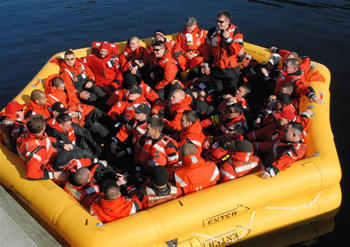 The rafts in question are the separate rafts that loaded into 737s for flights that flies more than 400 miles off shores. In these flights airplanes will not be able to make it to the land in case something happened so they must be well equipped to face over water emergencies, while in shorter flights over water airplanes can make it to the land or at least closer to the land where life jackets can do the job until rescue arrives.

Anyway, Qantas can not remove these devices, because they are required to carry these devices as per the Australian Civil Aviation Safety Authority rules order 20.11 (5.2):

5.2.1 An aircraft that is flown over water at a distance from land greater than the permitted distance must carry, as part of its emergency and lifesaving equipment, sufficient life rafts to provide a place in a life raft for each person on board the aircraft.

a distance equal to 120 minutes at normal cruising speed, or 400 miles, whichever is the less; or

The benefits of life rafts

Floating is not the only reason for these, people can float if they crash over water with life jackets or even seat cushions, but the freezing water can kill them in no time. So in case a plane crashed away from the land in a freezing water, by the time recue arrives people would die from hypothermia or other reasons. Life rafts have equipment to save people for longer times, including drinkable water, radio devices, a canopy to reduce heat caused by sun, flares, etc.

Anyway, from the article you linked it seems that it was just an idea by a smart person to save some money, and it will not be more than idea and life rafts will not be removed (and can not).

I will add some points to the reasons MeNoTalk already mentioned.

This are all very good reasons to have rafts on board.

Not the answer you're looking for? Browse other questions tagged air-travel safety qantas or ask your own question.

11
How good are Aeroflot's current safety and performance standards?
12
How to find what are the dominant safety concerns a tourist should have in a country?
8
What “undocumented” benefits are there to being an “elite” frequent flyer?
36
Is sleeping on the floor in planes allowed, and if not, why not?
5
What to expect in Detroit in terms of personal safety?
3
Are the same planes used for the same flight number the next day?
35
How to deal with a fear of driving?
29
What are the smallest planes running scheduled flights in Europe?