Do they serve sushi on flights?

As someone who's been in Japan for 4 months I would love some sushi on flights occasionally.

I usually take a special meal anyway (Hindu meal because it's tasty!). But I was wondering of there was a meal in which I had a good chance of getting sushi.

TL;DR: No, they do not serve sushi on planes. (See footnote.)

To set the stage, I've lived in Japan for several years, have traveled the length and breadth of the archipelago, and have flown in and out of the country on a wide selection of airlines (JL, NH, SQ, OZ, MH, AY, QF, TK, SK, NW, TG), in both economy and business class — and I've never seen actual raw-fish-and-rice sushi on a plane, unless I brought it myself.

First, on domestic flights in Japan, there is no food served at all in economy or business class, much less sushi. On JAL, a select few routes do offer simple meals in first class, but sushi is not on the menu. You're welcome to bring your own food on the plane though, including sushi, and even liquids are allowed on dom flights, although they may be scanned.

Second, on international flights to Japan, the food will be prepared not in Japan, but at the catering service(s) at the other end, which prepare food for all flights at all airlines, not just Japan. Are they going to offer sushi? No.

Third, on international economy flights from Japan, you've got Japanese catering firms that could offer sushi... but don't. Economy meals have to be cheap, reheatable and palatable to all, but as @jwenting states, sushi is expensive and perishable, and there are a lot of people -- yes, even people visiting Japan -- who dislike raw fish.

That leaves only one option: business and first class flights from Japan, where ingredient cost is not such an issue and there are usually multiple choices of appetizer. But sushi is still not a great option, because raw fish has to be kept cool, but the rice turns into a hard, gluey mess if goes cold, an impossible equation in the confines of an airplane. In business class, I have occasionally seen cooked types of sushi (grilled unagi eel, slices of futomaki rolls, etc), but I can't recall ever seeing raw fish on a plane.

But rejoice! If you've got more cash to throw around than I do, you can still enjoy raw fish on a plane... in First Class, since you simply can't do a proper Japanese kaiseki meal without sashimi. Here's the sashimi course from Asiana on a NRT-ICN flight: 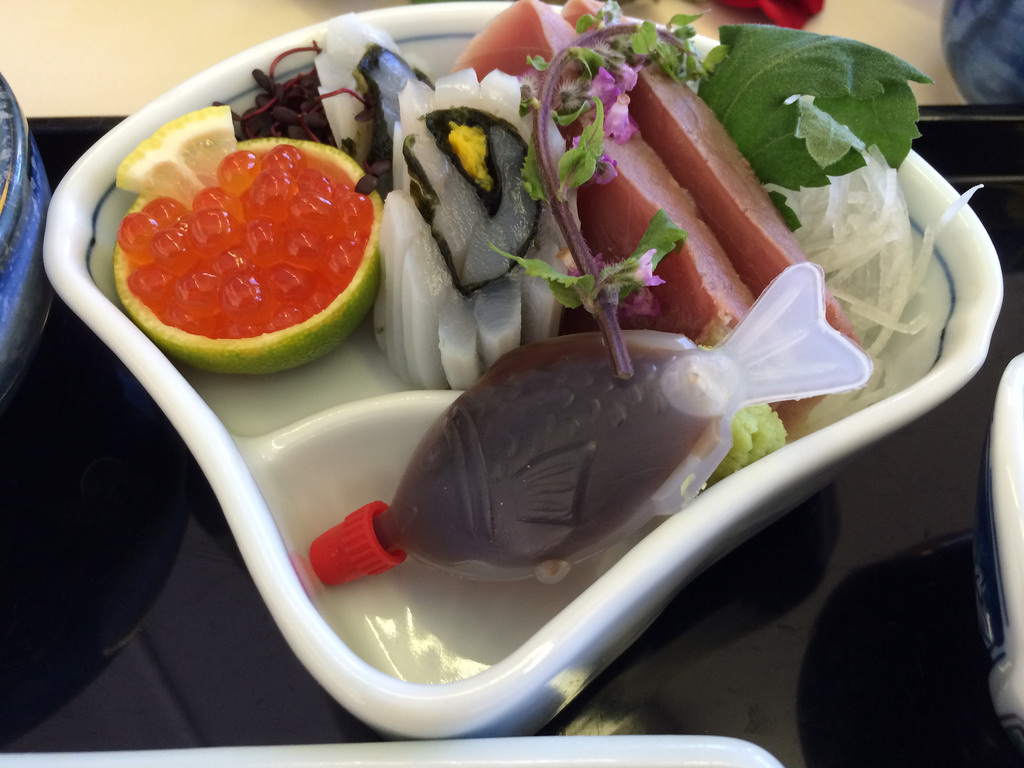 But note that none of these offer sushi (raw fish on rice), opting instead for sashimi (just plain raw fish). This is both more accurate, since you wouldn't serve sushi as part of kaiseki, and doesn't run into the aforementioned problem of trying to keep the fish cold and the rice warm simultaneously.

Footnote: I'm defining "sushi" as "raw fish on rice" here, which is narrower than the actual definition, but think of it this way: if someone offers you a sushi meal, and it has no raw fish, you'd most likely feel a bit cheated, no?

It's very common for airlines to offer sushi on flights to/from/within Japan, as well as for Japanese airlines on flights anywhere. However, most sushi served in coach is not the best quality (because typical coach meals are not the best quality, regardless of what they are). If you can use miles to upgrade to business class, the quality and variety of sushi (as for other meal items) will improve a lot. Longer-haul flights often have better food than short-haul ones, so a flight within Japan may not have as nice food as a flight between Japan and North America or Europe or Australia/New Zealand.

Sushi on flights to/from/within Japan is so common that there's no point in listing the airlines that offer it. My guess as to which airlines might not have sushi would be the very low-cost, no-frills ones.

When sushi is offered, it is usually done as one of the standard choices, not as a special meal 9which are usually for dietary restrictions), but may be pre-ordered at some airlines. If you want to know, usually the airline reservation desk can tell you. Just call, there shouldn't be a charge just to ask the question (only to issue or change a ticket).

From what I can find there is Sushi served on Asiana Airline but you can probably find it in other airlines as well just browse Airline Meals.

Or just a quick search for Sushi

I actually prefer to pick up sushi in the airport and then take it onto the plane. I fly with Delta and United most often and have never been served sushi, even in first class.

Airline meals tend to be either generic so as to be at least somewhat edible to as many people as possible or tailored to the destination or departure point, or tailored to the culture of the airline's home country (which of course often comes down to the same thing).
They're also designed to be easy and cheap to create and take well to freezing, microwaving, and long term storage.

Given that sushi is very much an acquired taste, expensive to make well, can't be frozen, and can't be stored long term after preparation, it's not going to be a popular meal choice with airline executives for serving their passengers except maybe on flights to and from Japan (and then likely mostly on shorter flights, and in business class or first class only).

Your best bet is to try to find a sushi bar at your departure airport and have a snack there before your flight, maybe they'll be able to pack you some for underway but with all the "security regulations" nowadays you might get in trouble for bringing food on board, and of course the wasabi or soy sauce would fall under the ban of liquids and gels.

Apparently KLM has just started their A la carte menu in Economy Class (currently only be ordered for KLM flights from Amsterdam to Abu Dhabi, Lima and Nairobi) and has a meal called "Japanese Delight" which does promise to serve sushi on intercontinental flights!

3
Missing Flight Check In
14
Help a nervous flyer plan routes that minimise flight changes and time spent in the air
3
Are airline ticket prices cheaper for some flights than others even before tickets are sold?
71
How can I avoid ordering multiple bottles of water at a restaurant?
2
Price alerts for airfare - worthwhile?
11
Can you board the plane when your passport is valid less than 3 months?
30
How often do typical passenger flights have problems with turbulence?
13
What's the shortest flight on which a full, complimentary hot meal was served to all passengers?