Is it technically illegal for US citizens to visit Cuba? [duplicate]

There is a belief that US citizens would be doing something illegal if they were to visit Cuba.

I remember hearing years ago while in Mexico where lots of people go on sidetrips to Cube that it's not illegal for Americans to visit Cuba but that if they spend any money there they would technically be breaking the law of "dealing with the enemy"?

So what's the real story? Is this all outdated or is it illegal for people from USA to go to Cuba? Or is the thing about them spending money there true? What are the real legal ramifications, if any?

As far as my understanding goes, you can visit Cuba, but you cannot spend money there. The USA has an embargo on Cuba. Wikipedia has a pretty solid article on it. You need a license to actually participate in commerce... but since that includes buying food you in essence cannot go to Cuba.

Licenses are released however. I have a Cuban uncle who goes back once a year. The valid reasons as per wikitravel are:

Professional journalists on assignment in Cuba

The following are issued on a case by case basis:

So in summary, is it open travel? No. Is it possible? Yes. The most common way around this that I have heard is "travel writers."

Restrictions for US citizens traveling to Cuba have been relaxed even more:

(...)While tourism is still barred by statute, the new rules amount to permission for any American who wants to travel to Cuba to plan an educational sojourn there, as long as they keep records of their activities for five years.

Travelers who fill their days with museum visits, cultural sightseeing and conversations with Cubans about their society, and keep a daily journal, could meet the requirements. American officials suggested that there would be little policing of the comings and goings of those making people-to-people trips.

In December, 17 2014 Obama announced modifications to the travel regulations and the embargo against Cuba in general. The details can be found in the following page:

Fact Sheet: Treasury And Commerce Announcement Of Regulatory Amendments To The Cuba Sanctions

Summarizing, although it is still technically illegal for US citizens to visit Cuba as regular tourists, the restrictions have been relaxed and there are a lot more of possible scenarios that make it possible to travel there, for example it is not longer required to apply for an explicit permission, traveling with a specialized company that has a permit is enough. On top of that, US credit cards can now be used in Cuba, and US citizens are now allowed to spend money in Cuba.

There is an ongoing debate in the US government currently about whether to lift the embargo entirely or not.

As far as I know, visiting Cuba without a permission from U.S. Department of the Treasury is illegal. 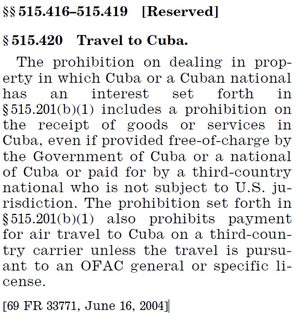 (I wonder if posting this information here is also illegal...)

Even if you do have permission, some restrictions still apply, as stated in this document (CUBA TRAVEL ADVISORY):

Authorized travelers to Cuba are subject to daily spending limits and are prohibited from bringing any Cuban “souvenirs” or other goods into the United States, with the exception of information and informational materials.

Civil and criminal penalties may result from a violation of the Regulations.

As stated in the first answer, it is technically legal to travel to Cuba but illegal to spend money. Travel restrictions are easing up a bit under the Obama administration. You can travel to Cuba now with designated person-to-person tour groups, but the itineraries are limited to education-based activities and not, for example, spending time on the beach.

That being said, yes, it is illegal but it is very rare to actually be prosecuted for breaking this law. I recently went to Cuba illegally and had no issues coming back to the states.

Here's some more info on how I did it.

Not the answer you're looking for? Browse other questions tagged us-citizens legal cuba or ask your own question.

19
Can US citizens go to Cuba freely and vice versa after the recent diplomatic relation restoration?
11
Is it legal for a US citizen to travel to Cuba?
17
Travel to Cuba as dual citizen (USA+other)?
9
Is it advisable for US citizen to attempt a visit to Cuba w/o going through an agency?
14
Is it possible to travel to Cuba by sea (from e.g. Mexico)?
10
Is it cheaper to get to Cuba from Miami or Cancún?
4
Travel Issues to Turkey
5
Pre-war travel ban
5
Can an American (USA citizen) visit Cuba and make a videodocument and put it on Youtube or sell to PBS etc.?
4
Dual Citizen (US/UK) Cuba Travel
See more linked questions

9
Is it advisable for US citizen to attempt a visit to Cuba w/o going through an agency?
5
Can an American (USA citizen) visit Cuba and make a videodocument and put it on Youtube or sell to PBS etc.?
17
Travel to Cuba as dual citizen (USA+other)?
4
Cuba Travel by US Citizen and Non-citizen/Non-Resident spouse
5
Do I need to get USD to travel in Argentina?
7
US law and travel to Cuba for citizens of third countries
19
Can US citizens go to Cuba freely and vice versa after the recent diplomatic relation restoration?
2
US Citizen/Ecuadorian resident traveling to Cuba