How can I go from Morocco to Mali by car?

How can I go from Morocco to Mali by car? I can't cross the border with Algeria because there aren't. So what can I do?

At a basic level, you would either travel down the coast of Western Sahara and then cut in through Mauritania, do the same but through Senegal instead of Mauritania, or catch a ferry from Morocco to Spain, back to Algeria and then come down from the north (somewhat of a crazy detour)

However the travel advisories indicate that the areas to avoid are north Mali (ok, the first two options do so) and northern Mauritania, which currently has an advisory for no travel at all. This is obviously a problem as both the first two options (the preferable ones) proceed through this area. 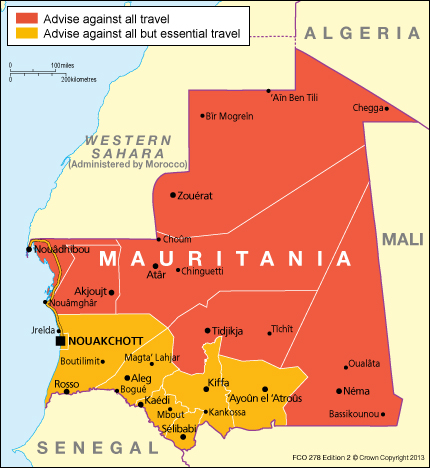 First-hand reports tend to indicate actual travel through the area is ok, as long as it's at day only and you stay at population centres. There doesn't seem to currently be negative reports on the Mauritania-Mali border after the ceasation of the French push through northern Mali, nor are these borders listed as currently closed, but proceeding through Senegal is probably the safer option anyway.

As Annoyed mentioned in the comments, Mauritania has shut a lot of border crossings currently (2014) due to Ebola. That includes all crossings into Mali, but also all into Senegal other than those at Rosso and Diama. The second route through Senegal is still potentially open because it crosses the border at Rosso.

Not the answer you're looking for? Browse other questions tagged road-trips morocco mali or ask your own question.

14
Is it safe to drive in Morocco if you don't understand Arabic?
5
What are my accommodation options when traveling with toddlers through Morocco?
12
Is it possible to cross the border from Morocco to Algeria?
12
Is Morocco currently safe to visit despite the Ebola outbreak?
5
Crossing border from Spain to Morocco - possible problems?
5
Fastest cheap way to get from Morocco to Algeria?
6
How to book car hire online for South Africa with permission to drive through Lesotho / Swaziland included?
1
Ways to reach "Todra Gorge" from "Fez" by public transport? (Morocco Travel)