Are there any space shuttles one can go inside of?

An exhibit featuring the official high-fidelity replica, latterly dubbed Shuttle Independence (called Explorer when it was in Florida), atop the 747 shuttle carrier aircraft, is currently under construction finally open at the Johnson Space Center in Houston. The official writeup states that

Guests can take the elevator to the top to first enter the Independence using a timed-ticketing system. The first stop is be the flight deck, where guests can see how the astronauts piloted the orbiter through missions. One floor down, guests will see how cramped living conditions were on the mid-deck and walk out into the payload bay to see an actual flown artifact…. Down one more level, guests enter shuttle carrier aircraft NASA 905, the largest artifact from the Space Shuttle Program on display. 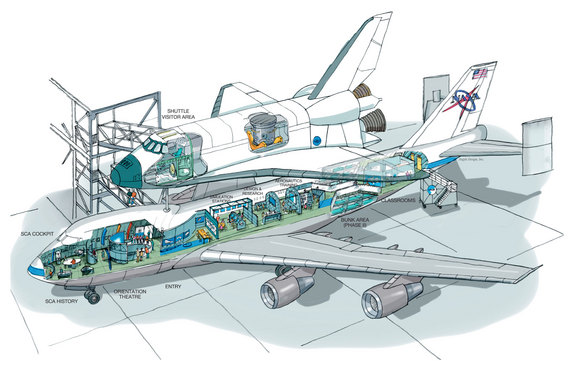 Your next best bet is the brand-new Space Shuttle Exhibit at the National Museum of the U.S. Air Force near Dayton, Ohio, which features the Crew Compartment Trainer, a life-sized mockup. The exhibit "allows visitors to experience the size and shape of an actual space shuttle orbiter by entering the payload bay and looking into the flight deck and mid-deck levels." 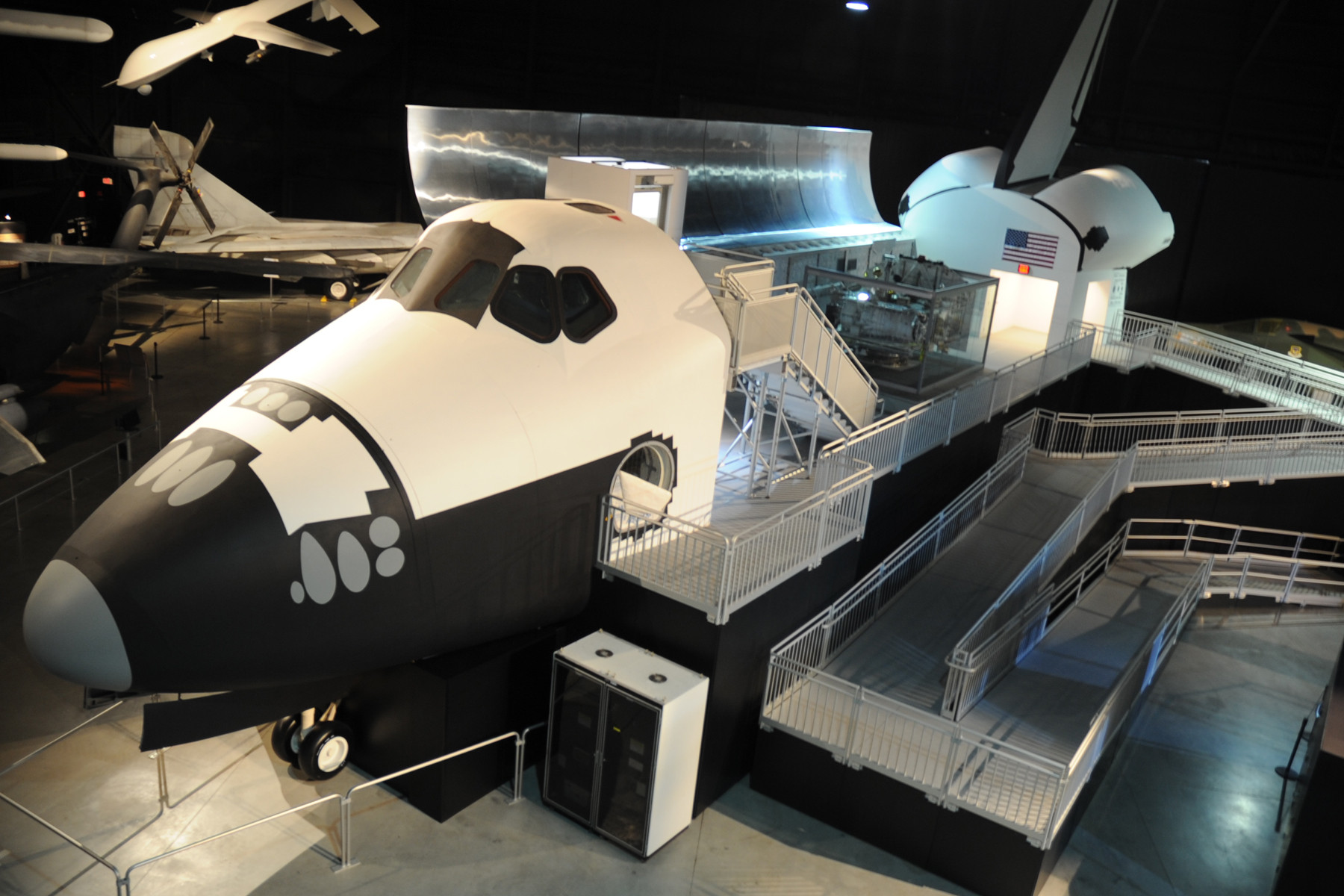 My third suggestion would be the Full Fuselage Trainer on display at the Museum of Flight in Seattle, Washington. It does not have the wings, but as its name indicates is a full-sized mockup of the fuselage that was used for astronaut training purposes. Tours of the interior are available for a fee on weekends and public holidays.

Other simulators are in the possession of the Wings of Dreams Museum in North Florida, the Adler Planetarium in Chicago, and as noted by Kate Gregory, Texas A&M University; however, it is not clear as of February 2016 if any of these are accessible to the public.

Shuttle Inspiration, a life-sized mockup of wood and plastic built by Rockwell in 1972 for its official proposal to build the shuttle, is now owned by the City of Downey, California. There are plans to create a museum around it, but recent news reports indicate it is being restored in preparation for a tour. I remember climbing on it on a science day for the Boy Scouts way back in the 1980s; it gives you a sense of its size and the scale of the crew compartments, but of course there wouldn't be any genuine artifacts, making it just slightly better than various other independently created replicas that seem to be floating around.

The four actual orbiters on display, as you know, cannot be entered by the public:

I have been in a space shuttle simulator, used at Spar Aerospace by the astronauts who flew the shuttle (they were practicing with the Canadarm) so I decided to see if any of the simulators are still around.

One seems to be headed for Texas:

Texas A&M University has the unique opportunity to acquire a donation of the fully operational NASA space shuttle simulator from the Johnson Space Center. The Shuttle Mission Simulator (SMS) has trained 355 astronauts for 135 missions and will be the only large piece of equipment from the NASA space shuttle program that will remain in the state of Texas.

That university has several pages with similar wordings but less and less confident dates, so perhaps until they raise the money it's not really there yet? However they definitely intended it to be open to the public:

"We will use it for public school outreach, for university outreach and university education," Valasek said. "It will be used in engineering classes. It will be available to all majors and all students. And most importantly to me, it will be available to the public. So access to space will have a whole new meaning now because a lot of the public will be able to really enjoy and partake in at least a small part of this for the very first time. It will definitely be widely accessible to all of the public to come in and enjoy for many years to come," said Valasek. "There have been 135 missions, 355 astronauts and now, it's your turn," he said.

Two are in place and ready to be visited in Dayton, Ohio:

National Museum of the U.S. Air Force visitors can now test their skill at landing a space shuttle orbiter with the addition of two new interactive space shuttle landing simulators. The simulators, which open to the public July 25 [2013], are free of charge and allow visitors to "fly" the shuttle to a safe landing using a joystick and video screens, and receive feedback on how well they piloted the shuttle. Designed by Historic Space Systems of Danville, Ohio, the simulators are representative of a space shuttle commander's and pilot's stations, and feature a reproduction of the forward portion of the space shuttle flight deck with internal cockpit dimensions that replicate its actual size.

So those are interesting but not only didn't go to space, they weren't used by astronauts.

Finally, Spar still sort of exists, as MD Robotics, a subsidiary of the MDA Space Missions division of MacDonald Dettwiler. They still have a facility in Brampton so it's possible that a tour can be arranged. (Mine was because my mother worked for Spar in software QA on the arm.)

The Kansas Cosmosphere and Space Center in Hutchinson, Kansas is the largest Space Exploration museum in the world, and has a full-size space shuttle on display--actually built into the building, you'll see it when you first enter. If memory serves, it never flew, but was built as part of the shuttle program. You cannot go into it, but you can see it pretty close up.

They have many other artifacts, including real V1 and V2 rockets, the recovered Apollo 13 command module, and a few artifacts that you can go inside (although they may be replicas).

So sadly, you cannot go inside of the Space Shuttle here, but if that's your sort of thing, this museum gets pretty close, and would still be a must-see on your list.

Further note that going into a space shuttle probably is never practical, unless you work for NASA, as all space craft are built to be as compact as possible, making them practically impossible to open to the public. They aren't built like ships or airplanes, designed for people to walk on board, and move around comfortably. The portions intended to hold people are either tightly-confined seats, with full harnesses, used during take-off and landing, or are long, tube-like structures, intended for use in zero gravity.

Not the answer you're looking for? Browse other questions tagged where-on-earth geek-travel or ask your own question.