Are there consequences to stamps in my passport that are not from border control?

I’m on a trip in Japan. I've seen many touristic places that offer stamps, many temples have it as a free souvenir. This is not the first time I’ve seen this type of souvenir, I also saw the same stamps at The Tall Ships Races 2012 Lisboa. It was a big concentration of tall sails ships. There every ship had a stamp for a fake Passport, mostly for kids.

I would like to know if I stamp my passport with one of this stamps I will have problems of any kind with border security? 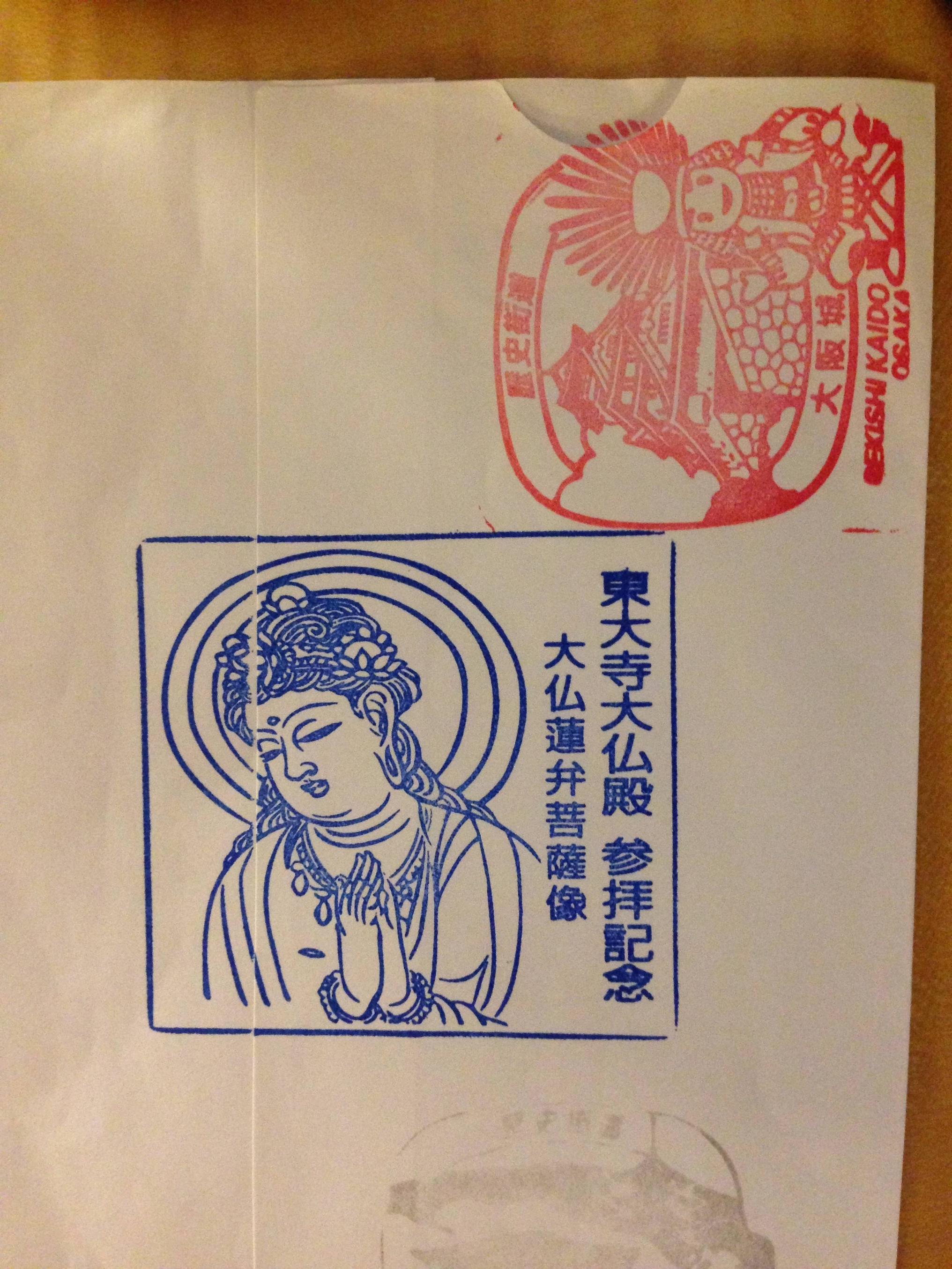 Your passport is an official government document, and when marked for any non-official purposes (like collecting a souvenir stamp), you are technically defacing or altering it. In theory you could have it voided (or worse), or in theory, an immigration official could refuse to admit you if they believed that it was a signal the document was in any way invalid.

In practical terms, there are many places in the world that issue many thousands of unofficial stamps. I know they are popular to get at Checkpoint Charlie, various Antarctica stations, Timbuktu, Easter Island, and other iconic world locations. I got one myself at Machu Picchu, which raised no eyebrows at any of the half-dozen countries I visited subsequent to Peru. I've never heard any firsthand accounts of problems, and tend to think that if it were indeed a serious issue, the guidebooks and State Department advisories would include a mention of it.

On the other hand, that stamp was the only non-official one— and what does hold you up at immigration is a passport full of unusual stamps. The more of these meaningless stamps you collect, the longer it takes for the agent to find a blank page, and the more likely s/he'll think something is "off" and refer you to the most persnickety bureaucrat you've ever encountered.

While it's cool to have a full passport, I try not to think of mine as a souvenir. Above all, it is a working document that I need in order to travel. Some countries require entire pages to be blank before they will issue you a visa; I've had some flip through to find a blank page just to stamp me in. As a result, I'm extremely wary of filling up any more squares or pages than strictly necessary— and I only travel internationally once or twice a year.

For souvenir stamps such as those you collect at museums, temples, national parks, hostels, distilleries, and so on, I would simply invest in a small journal or passbook. These don't expire, aren't subject to the whims of any officious officials, and are entirely yours to mark up however you wish.

Finland is notorious for systematic inspections of passports of visa applicants with the purpose of finding such stamps. 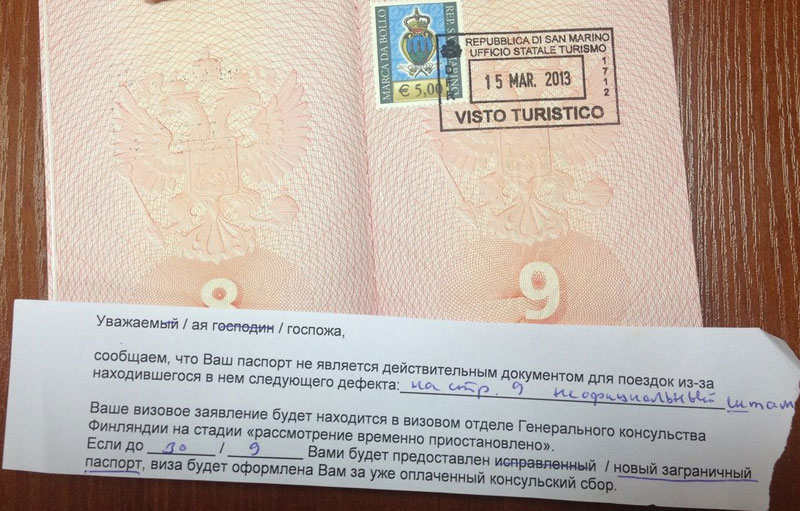 The passport above is one received back by a visa applicant with the note that says: Respected sir/madam, hereby we communicate it to you that your passport is not a valid travel document because of the following defect found in it: unofficial stamp on p. 9. Your visa application will be with the visa section of the Consulate General in the status of "temporarily suspended". If until 30/9 you bring a rectified/new passport, a visa will be issued for the consular fee you already paid.

Moreover, they even apply this policy to memorial stamps that border guards in UAE place to travelers' passport, despite the fact that travelers have no option to decline them.

Of course, if you don't need a visa, Finnish border guards won't care, which comes in accordance to the principle of fairness and equal treatment of all individuals. Such stamps are also issued in Finland itself.

Border /visa / status stamps in your passport are of interest to the nation you are attempting to enter. With rare exceptions (Israel vs. some Arab countries) they are of zero interest or legal status elsewhere. Unless you are attempting to claim that a stamp is legitimate for the purposes of employment or immigration fraud it's unlikely that they are going to be a problem.

Don't go overboard, don't overwrite currently-valid official stamps, and definitely avoid politically-sensitive areas and it's unlikely anyone will care. They have bigger fish to fry.

Don't get these. My friend was almost denied boarding an international flight because of a fake Machu Picchu passport stamp. Taiwan has rejected several people from entry for fake stamps as well.

If I remember correctly, the souvenir shop at Dorasan Station, which is the last stop in South Korea of the erstwhile Seoul-Pyongyang line, has stamps which look like North Korean entry stamps. Such a stamp could cause problems when entering other countries, and I believe they warn tourists about that.

I also got the (in)famous Macchu Picchu stamp (no idea why they seem to so nonchalently want every tourist to stamp their passport), and I almost got refused departure by the Chinese border control when crossing from China into Nepal, since they couldn't recognize the stamp and insisted that the passport was damaged with unofficial markings. We spent more than an hour there and finally they let me pass after calling and discussing with a superior. So yeah you'd definitely want to be safe and I would say it's not worth it to risk your passport which is the single most important thing when traveling internationally. Use a separate booklet to collect the stamps if you want to.

Andorra does stamps too but that's a proper country as is Monaco. Most border officials don't look at the stampage. I've got a lot of stamps and only 4 times have border guards taken an interest,

Got one in Ushuaia at the tourist booth showing a map of the island because it was personally meaningful, know it is at best semi-official. (The Port Lockroy, Antarctica, stamp next to it is slightly more genuine.) Never had a bit of trouble with it but then I have a fair number of stamps and it is in dark ink so it doesn't stamp out. Got tourist office ones from Monaco and on request at the Andorra border, as well as on request in some Caribbean ports, and the Barbados one says "immigration-souvenir"--again, no issues whatsoever. I've heard that Finland can give problems with clearly unofficial ones, but I suspect it comes down to whoever sees them and how they feel. Many years ago I was traveling by bus to and through Nicaragua and Honduras. Read that passport stamps from Communist countries made entry invalid to these nations, and I had plenty from Eastern Europe. I figured roadside border people wouldn't notice, and indeed they did not. Best advice I can give is to not over do it, and stay away from bright weird ones.

I have a few souvenir passport stamps from the Caribbean when on a cruise. It was never a problem with officials. In Lebanon my passport was looked upon for Israeli Stamps at the Beirut Airport. One other time my passport upon arrival at Heydit Intl. Airport in Baku Azerbaijan the official saw an Armenian Visa (used) in my passport. She went through all my pages then a higher official looked at all my pages. I was never told yet knew they were looking for passport stamps/visa of Nagorno Karbakh which is Armenian occupied Azerbaijan. I had an Azeri Visa that wasn't the problem so they stamped me then let me go.

Not the answer you're looking for? Browse other questions tagged passports passport-stamps or ask your own question.

2
Will a Liechtenstein stamp really get me denied entrance to Finland?
5
Are there consequences to carrying an old passport together with a new passport?

36
Are there any repercussions from having an Israeli stamp in my passport?
5
Are there consequences to carrying an old passport together with a new passport?
17
Not getting passport stamped when entering USA from abroad
14
Belarus/Russia border and passport control
0
Passport stamps from london -ams-london
4
Passport control when flying from Romania to Italy
11
Is it possible to request a passport stamp when traveling between Schengen countries?
6
Are North Cypriot land border crossings equipped with passport stamps?
1
I did not ask agent to stamp my passport when leaving Canada. Is there anyplace that can do that now that I am back home?
4
UK immigration Stamps: Are there Different types?