Will the traffic and parking be easier in York on a week day or a weekend?

Driving up from the Peak District, is driving in to York more busy on a week day or a weekend?

The former would have regular works, the latter would have more tourists. I'm not sure what the relative numbers are for both in York specifically.

York is a difficult place for the motorist at any time. For the obvious historical reasons the city centre is not geared up for anything but light-to-reasonable traffic but does have a linked series of single-carriageway roads circumnavigating the Roman Walls to help motorists avoid traversing the city centre itself.

A few miles further out you have an outer ring road which is dual carriageway on the South and Eastern sides (A64), and single-lane on the West and Northern sides. Parking is severely restricted in the centre although there are a few small car parks if you wish to gamble on driving to the centre and finding a space. York counteracts this by having 5 or 6 Park and Rides (info here) dotted around the outer ring road, with judicious use of bus lanes to move visitors and workers into the city centre reasonably efficiently and as York isn't a huge city it's a fairly quick journey.

Using maps.google.com you can show traffic for arbitrary times of the week: 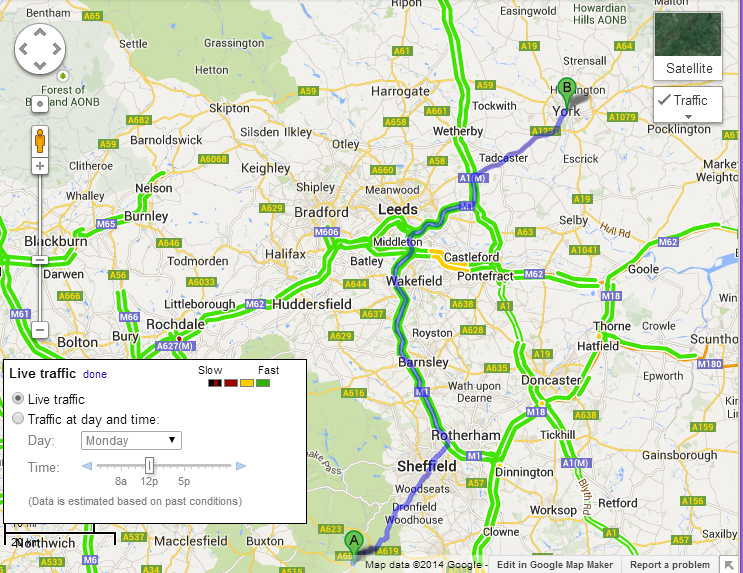 I use this regularly to answer these types of questions. On perhaps its most useful occasion I determined that landing at LAX at 6:45pm on a weekday was a way better idea than landing at 5:00pm.

Note: I don't really know whether the map shown is the route you are talking about nor have I ever driven in Britain. But I have found google's historical traffic data to be a very good predictor of future traffic wherever it is available. Certainly more reliable than a single person's opinion.

Not the answer you're looking for? Browse other questions tagged uk driving york or ask your own question.

38
Can I use Google Maps traffic information to estimate driving time for a specific date/time?

12
Is two weeks enough time to drive from Tallinn to Stockholm and have enough time to visit the major cities along the way?
3
Best location for car rental in to the Peak District coming from London?
4
Driving a rental car through Colorado
2
Can I use a different travel document than APIS?
2
From O'hare, headed east on I-80 into Indiana, how to avoid traffic?
9
Where to stay in York, UK (general guidelines, NOT specific hotels!)?
3
Crossing from UK to France and back on the same day in the same car but with different drivers