Is it culturally acceptable for an American to visit the memorials in Hiroshima and Nagasaki?

The title says it all. Is it culturally acceptable (to the Japanese) for an American to visit the memorials to the victims of the atomic bombs in Hiroshima and Nagasaki? I realize that a Japanese person probably wouldn't tell me to leave, but would they think I was being rude or uncouth?

Here's an excerpt from Wikitravel:

Although many visitors, especially Americans, may feel apprehensive about visiting Hiroshima, it is a friendly, welcoming city, with as much interest in Western culture as anywhere else in Japan. Tourists are welcomed, and exhibits related to the atomic bomb are not concerned with blame or accusations. Bear in mind, though, that many hibakusha [the survivors] still live in the city, and even most of the young people in Hiroshima have family members who lived through the blast. As such, the average Hiroshima resident isn't likely to relish talking about it, although you needn't shy away from the topic if one of the chatty fellows around the Peace Park brings it up.

Despite this and @MeNoTalk's comment, another interesting story by Kate Berardo on Culturosity.com demonstrates that you can't be certain that no one will care or direct resentment toward you, but the circumstances of the story suggest it may have been a little bit of bad timing and luck on the author's part. Besides, it was really just a few angry words with a sidelong glance; nothing an American traveling abroad shouldn't be prepared for almost regardless of where one chooses to go.

Regardless of what some others might think, my opinion as an American FWIW: if you want to go to learn about the consequences of the bombings, go with an open mind and sympathetic attitude – I will if I'm ever lucky enough to get the chance. There is a museum in Hiroshima dedicated to memorializing the victims and promoting peace. One of their English newsletters describes a visit from American students positively, demonstrating a welcoming reception by the museum staff and local students. If you want to visit Hiroshima to appreciate the rest of the city as well, more power to you. It certainly has much more to offer than war history. I'm sure the same is true of Nagasaki.

I would only advise against going with an attitude like this guy's; I suspect few will be particularly eager to hear contentious opinions about the bombings from an American perspective (especially not an ignorant one). Make your mission one of learning and receptivity to the local culture and perspectives, not one of "truthiness" or "keeping it real", and you should be fine. You've already got the right kind of attitude in asking open-mindedly and cautiously about how your presence might impact others; keep it up, and go in peace kimosabe.

[BTW, I would welcome any general counterarguments from the community. I'm not sure I'm the right guy to answer, having never gone.]

A quick scan of Wikivoyage's guide to Hiroshima sights indicate that memorials and museums to the attack have English-language information. If they didn't intend non-Japanese to visit the place, they wouldn't have such information.

I seriously doubt that they'd regard the USA differently from other non-Japanese countries in this context, even though the USA was the country that dropped the bombs, or even be able to tell whether you're an American versus a Canadian or an Australian.

I remember reading once about an atomic bombing victim who is a volunteer at some museum or memorial wanting to learn English so that he could relay his experiences to English-speaking visitors.

Likewise, displays at the House of Sharing, which is dedicated to comfort women, are in English, Korean and Japanese, and Japanese people make up 40% of the visitors.

What may surprise you is that even museums at the other end of the "International Peace and Tolerance" spectrum have some support for English, and therefore expect foreigners to visit. The Yasukuni Shrine, which hosts the spirits of those who died for the Emperor in war, is criticised for including the spirits of Class A war criminals, and for its nationalist take on history. And yet, there are limited English-language explanations within the museum, and also has an English-language pamphlet. And this far-right blogger mentions foreigners visiting the shrine, including those involved in war.

Update 2016: Is it ok for Americans to visit the memorials? 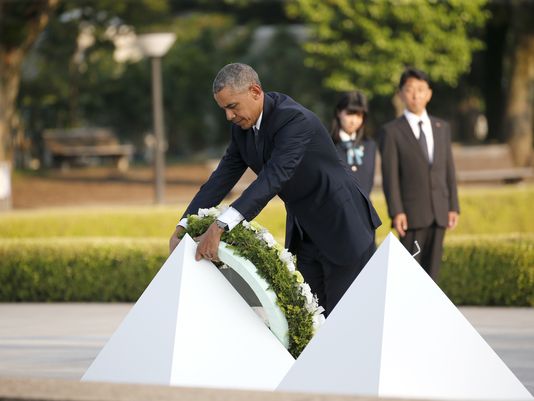 It's perfectly fine. I've been to both Hiroshima and Nagasaki in my (Japanese) high school trip including multiple sessions with hibakushas.

There is really no animosity in general. The emphasis of these museums and parks are solely on how horrible nuclear attacks and war is, and how we need to achieve world peace and eliminate all wars.

I think most Japanese would find it a good thing. Of course, you'll always be able to find people who disagree, but such views are rare IMO.

Absolutely not an issue. Just to give a first-hand perspective (though the other 2 answers both excellently cover the 'why not'), I visited the Nagasaki Atomic Bomb Museum and the Peace Park a few years back, and at no point did I feel any ill-will or awkwardness. As with any similar place as long as you are respectful you are welcome - the staff were as polite and welcoming as one would expect of a Japanese visitor centre or attraction.

It's a sobering experience, but one well worth doing regardless of nationality.

As far as I see it, it won't hurt any Japanese citizen's feelings if you visit the Hiroshima & Nagasaki memorials. It rather depicts some sign of empathy towards the victims (unless you end up doing some random foolish act at a place of such deep meaning for the natives).

First off, you as an individual, are not accountable for a decision made by your country's then president some 70 years ago. Of course, it was a bitter experience for the natives but I don't suppose they would feel culturally hurt for it.

For an analogy, as an Indian, I don't hold every tourist from the UK accountable for say, the Jallianwala bagh massacre. Or rather, would you feel culturally hurt, if some Japanese visits the Pearl Harbour memorial, or for that matter, a middle-eastern the WTC memorial? Hopefully not.

Not the answer you're looking for? Browse other questions tagged japan sightseeing us-citizens cultural-awareness world-war-ii or ask your own question.

5
Can an American (USA citizen) visit Cuba and make a videodocument and put it on Youtube or sell to PBS etc.?
46
Is it socially/culturally acceptable for Indian/Sri Lankan people to visit the Oktoberfest?
9
Does an American citizen holding a Belgian passport need an ESTA to visit the US?
4
How/Where do I make local friends in a short-term (1 month) stay in Japan?
24
US Girlfriend Denied Entry to UK
0
UK Visitor Visa Denied
0
What is the best way to maximize chances of reentry upon leaving the UK?