What's the quickest way from London Kings Cross to Euston, by foot or tube?

My train to London Kings Cross has just been cancelled, so instead of having plenty of time to make a connection to Euston, I'm going to have a mad dash...

To get from Kings Cross to Euston I have a number of options, but given that my train ticket includes an Underground journey, I'm thinking that either walking (fast!) or tube would be my best bet. Given the tight connection, I'm after the fastest way to do it. What would that be?

Based on this 3D model of Kings Cross / St Pancras underground station, I see that none of the underground lines are that close to the Northern Ticket hall where my later train will come into. At the Euston end, I know that Euston Square station is quite a fair way from Euston station itself, which the Victoria or Northern Lines are quite deep so there'd be walking + escalators to get up to the surface (plus the long walk+escalator at the KX end to get to them). Walking wise, not sure which is the quickest way to go, but I suspect it wouldn't necessarily be the "obvious" one along Euston Road.

I also vote for walking. You can save a little bit of time by being in the right part of the train, and then by avoiding a couple of annoyingly slow pedestrian crossings:

Don't use the tube. If you need to use public transport, there are buses which should be quicker than the tube, but I would recommend walking unless you have a mobility problem or a lot of luggage.

There is an alternative route by going through St Pancras Station, out via the Midland Road exit and turn right to go along Brill Place/ Phoenix Road (alongside the Francis Crick Institute) and then left along Eversholt Street. It's slightly farther, but it's quieter. Euston Road's pavement (sidewalk) is quite narrow and is often busy. You can get slowed down by other pedestrians along there, particularly if you're trying to rush. Brill Place is quiet enough that you can just walk along the roadway if someone blocks the pavement.

There is a true shortcut by going between the British Library and the Francis Crick Institute and then along Doric Way, but as of 2016, this ran into a locked gate. However, it was reopened on 21 June 2017 as "Dangoor Walk". It's not an obvious route, and mapping apps will generally not offer it to you as an option, but I've manipulated Google Maps into showing it: 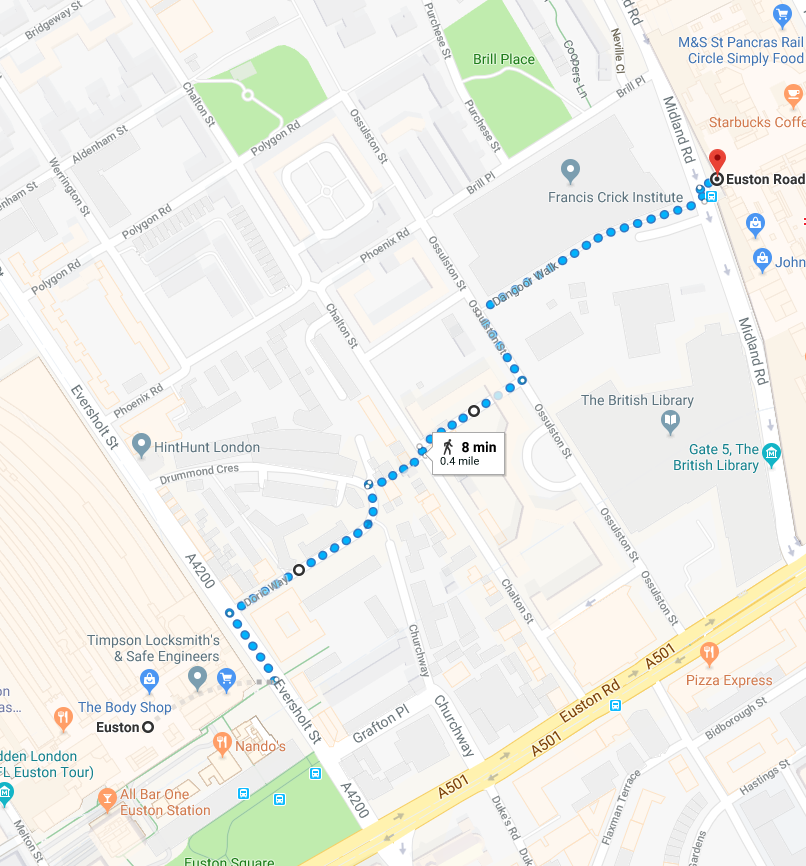 Note that Churchway is literally an alley and the path between Chalton Street and Ossulston Street on this route passes between the backs of people's houses. Last time I did this route (in summer), I literally walked underneath people's washing lines.

Walk it! I studied at UCL (just over the road from Euston) and lived near Kings Cross. As long as there are no mobility issues, there's no way I would recommend using public transport between the two stations. You'll walk past the British Library, too, which is worth seeing.

You'll end up walking almost as far underground, down escalators, corridors, along platforms at Kings X, then the same coming out at Euston as you would walking above ground, and without the need to wait for a tube train :) Walk straight along Euston road. It will take you 5 minutes max.

If you walk fast then I would definitely say that walk will be faster. Just follow the main road (Euston Road) just like Google Maps suggests, I don't think there are any reasonable shortcuts. I didn't really time this, but I would expect about 10-12 mins from platform to platform.

Just adding an up to date comment that the route given by Richard Gadsden (copied below) definitely works as I just walked it in less than 10 minutes with a suitcase at a good pace. Definitely the fastest between these two stations ever! Especially amazing if going to/coming from KGX Platforms 9-11.

Note that crossing between Chalton and Ossulston St requires cutting through a courtyard which is gated at both ends so there will be times of day this is closed. Just go down to the next street to cross.

I just came back from Euston station last night and walked from there to St Pancras. I decided to try the shortcut above and the map above is totally correct and works fine. However, even though I saw that the gate was open between Charlton & Ossulston streets, I thought it might be best not to go through it. So I carried on down Charlton and walked along Phoenix Road, with the Francis Crick building on my right and at the end came right out at St Pancras. This is much much faster than going all the way down to Midland Road and then walking along Euston Road, which is always super busy and you have to fight the huge crowds on the pavement with your suitcase behind you. A pain, so I will always use the shortcut in future.

I concur with the walking routes through St Pancras and then using the back streets, far quicker and less frustrating. However, consider taking a bus if going from Euston to Kings Cross early in the morning or late in the evening when the traffic is free flowing - don't bother if going Kings Cross to Euston as crossing the Euston Road at the Kings Cross end is generally time consuming and you still have 100 yards to go to the Westbound bus stop.

Not the answer you're looking for? Browse other questions tagged trains public-transport london or ask your own question.

23
Paddington to Euston with kids: minimum walking by tube or by taxi?
14
Is there a website that tells me the quickest way between two London Tube stations?
14
Time needed to change between St Pancras and Euston?
4
Traveling with computer parts and expensive monitor to Dublin

8
Quickest way from London Paddington station to London City Airport?
14
Is there a website that tells me the quickest way between two London Tube stations?
4
How to get to London Heathrow from Shepherd's Bush in light of possible Tube strike?
7
Quick way to exit King's Cross tube station?
10
Tube delay on a cross-London rail transfer, who to claim compensation from?
19
Is there a map that shows the walking time between London Tube stations?
23
Paddington to Euston with kids: minimum walking by tube or by taxi?