When in Sri Lanka I would like to use a few words of either Tamil or Sinhalese with the locals. How can I tell which language I should try? Are there cultural appearances that I can go from? Of I get it wrong would anyone be offended?

If so I could be better off sticking with English.

Not an easy task if you are planning to know the difference by looks, they both have the same skin color (some say Sinhalese have lighter skin color, but this is not true).

The easiest method to know which language to use is geographical distribution. Most Sinhalese live in south, west and most of the middle parts of Sri Lanka; while Tamil live in narrow strips in the northern and eastern part of Sri Lanka.

Here is a map showing the geographical distribution of Tamil and Sinhalese: 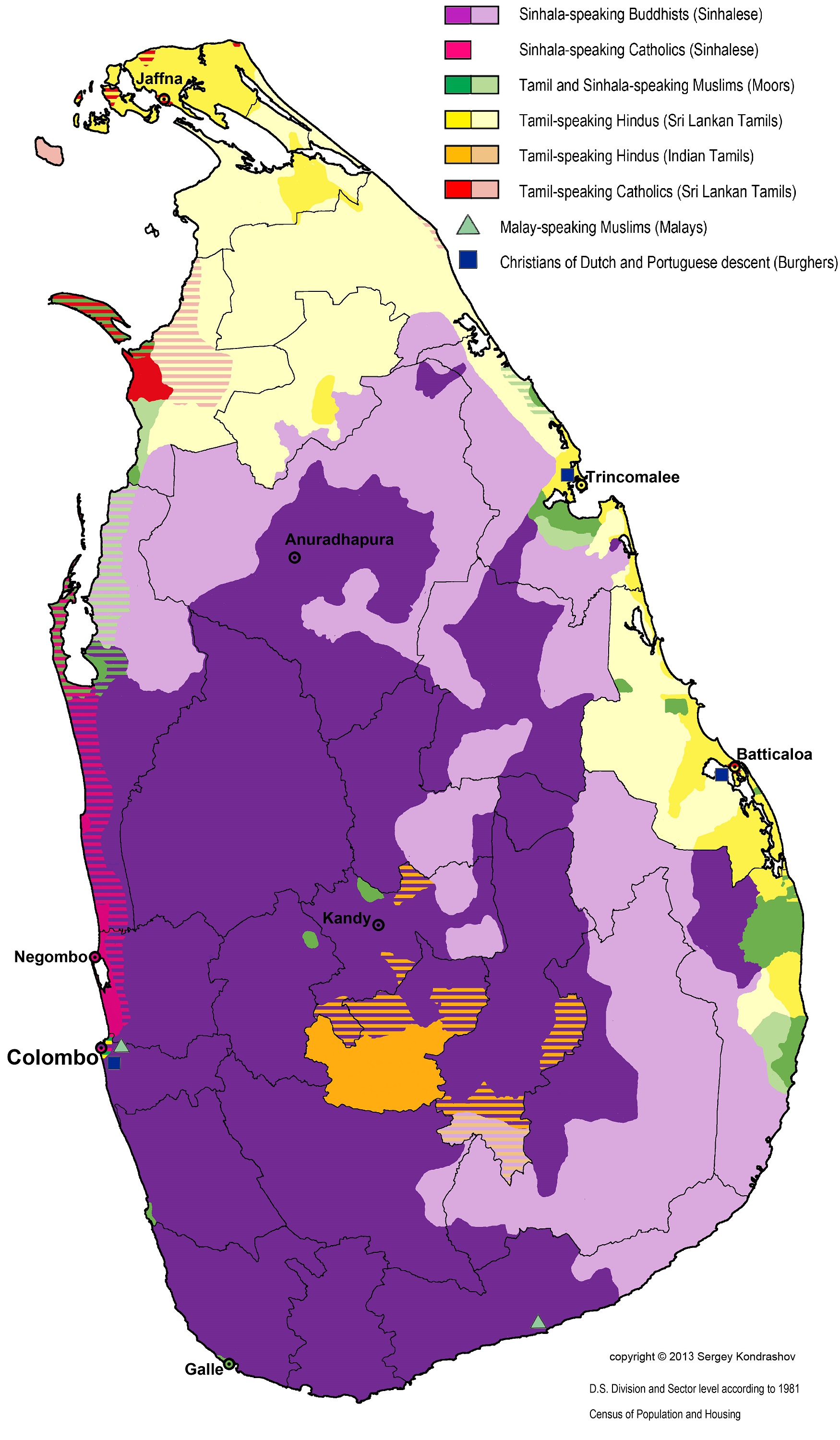 Another good method to distinguish between the two language is the language itself, Sinhala is of an Indo-Aryan origins, it sounds like Hindi, while Tamil is a Dravidian language which makes it sound like Malayalam or Kannada languages or any other southern Indian language. If you are familiar with any of these languages or at least know how they sound, you will easily know the difference as they are totally different in everything especially pronunciations.

If you are not sure, just use English. If the person does not understand English, use Sinhala as it is widely understood even among the Tamil.

Since the author of the accepted answer does not seem to be from Sri Lanka (no offense, sir), I'd like to add a Sri Lankan answer to this.

Most of the Sri Lankans (Sinhala or Tamil speaking) can speak English to some degree. If you are in Colombo or Kandy, there is a very good chance that the person you are speaking can understand English. English is a requirement to hire for sales department in most of the super markets and other shops so go ahead and speak English. Just try to maintain a slow and clear accent.

There are 3 major ethnic groups here - Sinhalese, Tamils and Muslims. Muslims usually speak both languages. Overall, Tamil and Muslim people can speak Sinhala just like other Sinhala people do. Both Tamil and Sinhala languages, however, are difficult to understand and how you pronounce the word will also make a difference.

MeNoTalk's answer is just perfect and just refer the map. However, even in the areas that the map says Tamil speaking people are a lot, you will find people who speak Sinhala fluently.

When in Sri Lanka I would like to use a few words of either Tamil or Sinhalese with the locals.

That is great. Speak with anyone in their own language and don't be surprised if they do their best to help you or make friends with you. Everyone here is very friendly.

Are there cultural appearances that I can go from? Yes. Tamil people, in most cases in the morning, go to their religious places. They have some dot in the forehead and Tamil women usually have white color decorations in their head (and relatively darker skin color compared to the rest).

One easy way would be to look at the sign boards of shops. If that's a Tamil only board, or have the Tamil version first, that's a sign and Tamils are there or many of them speak Tamil. But that's not the case every time. I'm a Sinhalese and I go to Tamil shops and their religious places (known as "Kovil"). They do the same.

I get it wrong would anyone be offended?

Not at all. Just use your hand gestures and make them feel that you really need to speak their language. Don't forget to smile. I have seen many tourists speak a little louder which is not really necessary. If a girl has a Muslim scarf (I don't know the actual name), and is with her mother of father, speak with their parents and not their daughter - that's kinda offensive to approach such girl but overall, you'll be welcomed everywhere.

I spent 16days in Sri Lanka and I am from South India. I speak Tamil pretty well, but it didn't help me much except at Jaffna and Nuwara Eliya. English is widely understood by people in hospitality segment. Sometimes at the interior parts, communication was a big issue. Learning a few words -salutation, apology ,appreciation -will make a big difference. Sri Lanka is a very tourist friendly place, so you wouldn't struggle much with language.

Not the answer you're looking for? Browse other questions tagged languages sri-lanka or ask your own question.

9
Climbing Adam's peak (Sri Pada) in Sri-Lanka
6
Power plugs in Sri Lanka
18
Catalan or Spanish in Barcelona?
60
To travel 30 km from India to Sri Lanka, do I really have to take a 1500 km, 20 hour detour?
10
Should I try and use basic Italian when on holiday in Italy?
1
Surfing in Sri Lanka in August
5
Can you take alcohol to Sri Lanka from Australia?
59
Is it rude to speak Swedish in Norway?
3
Bus Times Ratnapura to Kandy (Sri Lanka)
11
Are there a FEW languages that, along with English, will let a person be understood by the vast majority of people in North-Western Europe?