How can I get to Mike Brant's grave?

Mike Brant, the famous singer is buried in Haifa. According to Wikipedia the cemetery is called "Camp David".

Could someone tell me where exactly it is and how I can get there from the German Colony. I don't have a private car at my disposal.

Mike Brant is buried in the Sde Yehoshua Jewish Cemetery in Haifa, also called Mahane (camp) David or Neve David after the neighborhood it located next to it. The Cemetery can be seen on Google Maps. There are two bus stations, one beneath it and one above it, different buses go to each station, so you should decide what entrance you need before. The location of the stations is: 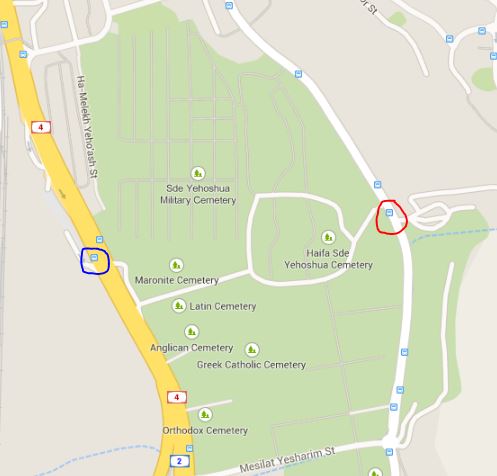 The red circle is the above station and the blue, the below.

To find out what buses go there you can check the Egged site. The station in the German colony is called German Colony: Kiryat Eliyahu, Sderot Ben Gu... (the main street) or German Colony: Yitskhak Sadeh.

The station below (blue) the cemetery is called The Old Cemetery: Sderot ha-Hagana, there is only one station there.

I could find the exact location of the grave in the cemetery however, only a picture of the grave:

There are more pictures of the grave online. Sadly I couldn't find the exact location of the grave, only that it's located near a wall, but it isn't clear what wall it is, and if it's a wall separating the different cemeteries, or a bounding wall.

Not the answer you're looking for? Browse other questions tagged public-transport israel cemeteries or ask your own question.

18
Planning to stay for 3 months in Berlin, Germany. Should I bring a car with me?
14
How to find a grave in Barcelona?
3
Is it possible to get from Tiberias to Ben Gurion airport by sheruts?
1
How to get VAT refunded in Israel?
6
What are the actual rules for legally visiting Stull Cemetery?
5
How can I get to Cacao, French Guiana?
21
Where can I get an anonymous Rav Kav card issued?
2
What are the public transport options to the Hungaroring?