How is a hightop different to a camper van?

I just wanna hire a campervan to travel from Sydney to Cairns. I have had a look at a hire company and they have a lot of campervans but I don't know what the difference is between high tops and others. Is a high top better to travel or drive? That's the model I'm looking at at the moment.

"Hitop" is just a model description of a van with a permanent vertically extended roof in the rear compartment so that you can stand up in it. What you'll get in Australia is a "Toyota HiAce Hitop". Other body styles are generally well covered by vendor supplied photos.

The Hitop is OK to drive, more liable than a car to be caught side on by a wind gust as you eg leave a road cutting or pass a road-train, but perfectly safe if driven in a sensible manner. Fuel economy is somewhat worse than most cars. Probably 12-15 l/100km for petrol versions when touring.

Photo: Hitop camper* passing an Australian "Road Train". We were doing 130 kph (legal limit there) - I'd estimate that he was at about 100 kph (3 petrol tanks + the 'tractor'). They say 'allow 1 km when passing'. That sounds excessive. I checked how far we travelled during overtaking on this occasion using GPS - 800 metres! Allow 1 km! (or more). [That driver was superbly well behaved - he put his wheels on the road edge, signalled for us to pass, and held the 'train' as steady as you could hope for throughout.][* It just happens to be a 'Britz' :-) ]. 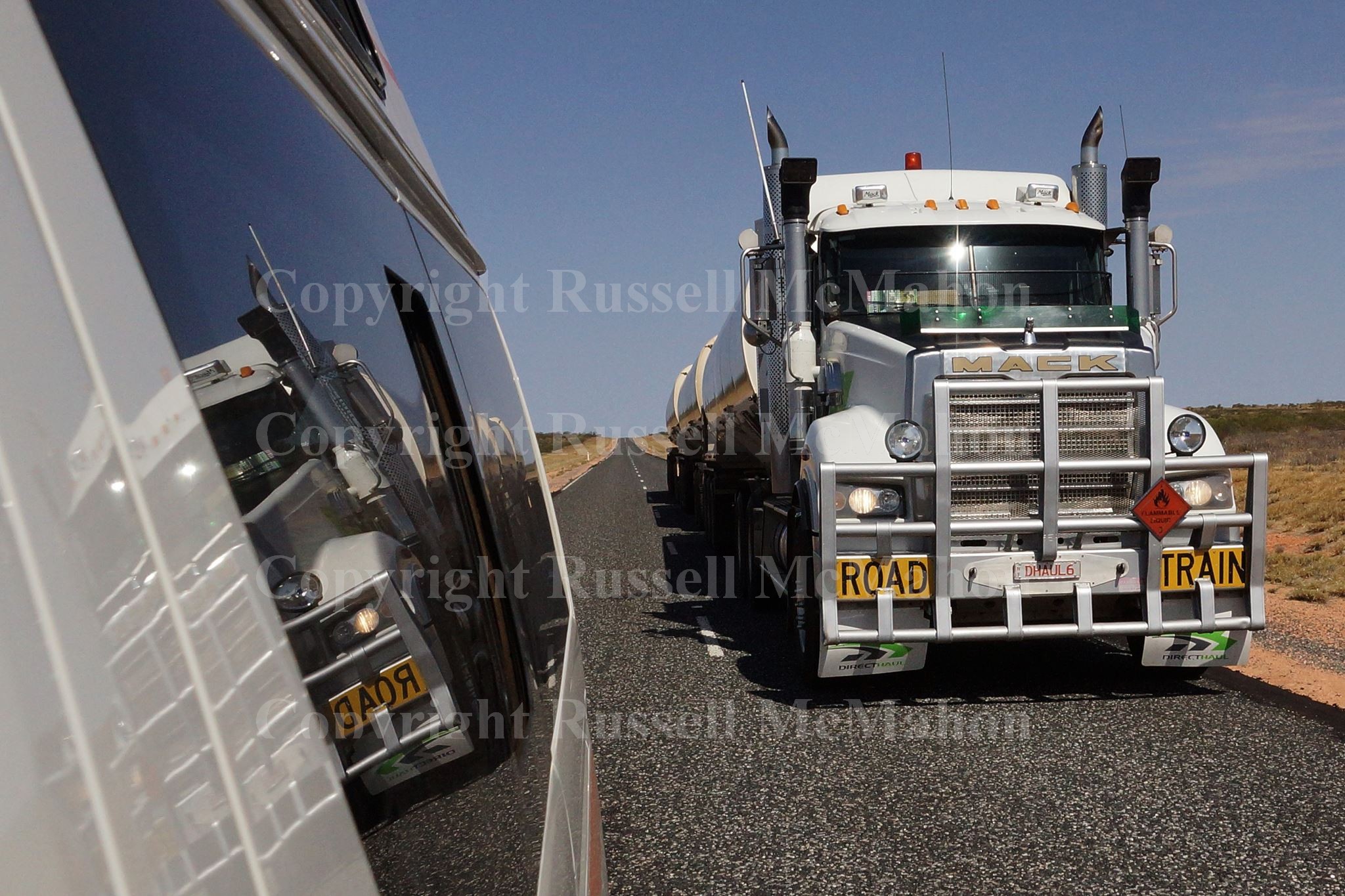 NB: "Britz" gets mentioned a lot below. I have no association except as a customer. They were efficient, the vehicle was in good condition and they know how to run a business. They fell down with me re some fine detail where they could have done better and I felt ripped off in a very minor way - which was stupid of them given how good they were overall otherwise. I'd use them again. Think 3 times before thinking about using opposition vans that have rude slogans or funny paintwork all over them, with deals that may SEEM slightly cheaper. Then hire some other brand.

While other people may use the name "Hitop" is usually a Toyota van and often (not always) sourced by Britz, regardless of who you think you are getting it from. There are a large number of companies advertising camper hire in Australia - but only a few actual hirers - the rest act as 3rd party "fronts" to the few actual hire companies and seek to differentiate their services in some way. Using a 3rd party company is usually slightly cheaper than going directly to Britz or whosever. Britz is the largest of the hirers and even some of the others appear to have Britz links.

You will be offered various levels of insurance and liability. Unless you are a major risk taker, take the most expensive "no hassles" version. This will significantly increase the hire cost. If you take the low cost insurance version you COULD end up paying $3000 or $7000 "excess" if things go worst case wrong. Read the fine print. Several times. Even with Britz. THEN read the fine print and see that even the top level cover does not cover single vehicle roll-over fully. Excess for that is maybe $3000. Maybe more. For $99 more you can cover that too. Britz told me that they get about 4 single-vehicle roll-over accidents per month. This can be a highway shoulder that crumbles, an inexperienced driver stupidly trying to avoid one of the myriad dawn and dusk kamikaze kangaroo attacks, gravel on a corner when you least expect it or ...???

Who's up at dawn? :-)
Kangaroos attack as dusk approaches. A group stands passively by the roadside as you approach as 100 / 110 / 130 kph (legal limits depending where you are) and when you are almost parallel with them they scatter. Some head for the bush to your left. One or two may decide that across the road is more attractive and leap headlong onto your path at short range. Really. The lighter weight crash bars on outback vehicles are called "roo-bars" for a reason. You really do not want to hit a roo at 100 kph. Certainly not in a light metal van.
You also do not want to do single vehicle rollovers avoiding them.
On your first time of the open road find a nice straight stretch of good quality road with no traffic and see how hard and short you can stop without getting off line and without, of course, managing a SVRO. Do this a few times so that you are comfortable with what the van can and can't do. Realise, as of course you do, that the off camber gravel covered road corner that you and the suicidal roo find yourselves on at dusk a few days later will not allow you to stop so fast (while avoiding said SVRO). But at least you will be prepared.
Wilpena Pound, just on dusk. We had just booked in to motor camp.
Harley Davidson 2 up arrives.
I "nice bike".
He "That wasn't fun!!!"
I "Why not?"
He "Kangaroos !!!!!".

Worse even that in a Hitop, I imagine.

Camperman, whose ad you referenced, have a reasonably good SVRO policy.
They say:

Also watch for "immersion damage" some hirers exclude it!.

One wicked policy I saw (NZ hire but company is active in Oz) did not have rear end or underbody damage of ANY SORT covered by any level of insurance offered. If someone ran into the back of your van you'd be wholly liable.

Not the answer you're looking for? Browse other questions tagged australia car-rentals terminology campers or ask your own question.

6
Does anyone know where to hire a car camper (not a campervan) in Australia?
10
Is there something like a matrix car rental search engine?
6
Camper vans and travel in Australia
3
Renting a van for 6-7 people in Australia
8
Travel to Australia buy or rent surfboard
3
Rental car insurance in Australia
8
Are there any sites for camper van hire in Greece?
3
Are airline ticket prices cheaper for some flights than others even before tickets are sold?
7
Italian rest areas: Is it OK to sleep in a camper van?