I will soon fly from London to Los Angeles, with British Airways. Since the flight is long, I would like to bring my laptop and my Kindle to work or read during the 11-hour journey.

However, I am a bit worried about theft on board, e.g. from other passengers, when I am asleep or going to the toilet. I travel on my own.

Is theft on airplanes a common phenomenon? If so, what are the ways to prevent my stuff from being stolen?

There are basically four places your possessions can be during the flight:

My approach is to use a small cloth "shopping bag" - the kind that comes in a tiny pouch. When I get on the plane I put all the stuff I will actually use during the flight - laptop, magazines, gum, phone, headset, bottle of water, whatever - into this bag and put all my carryon away. (I started doing this when I got seats with no "under the seat in front of you" available.) I can usually keep this bag with me during takeoff if it has very little in it and is beside me on the seat or on my lap. Some airlines have "purse hooks" I can use to hang it from. You might not recognize them, so here is an action shot: 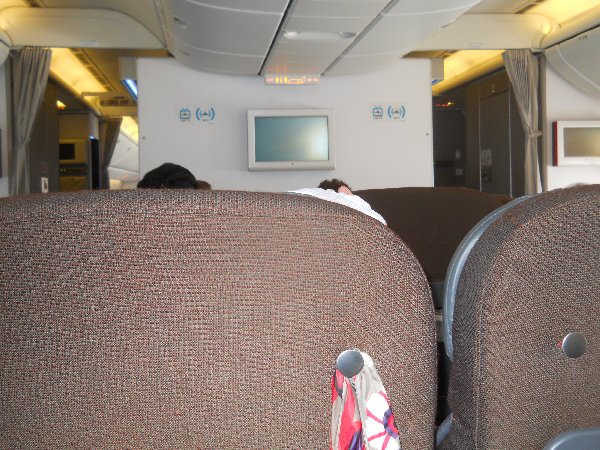 Other times I put this bag into the seat pocket - I can't possibly forget it, it is a distinctive colour and pattern. This leaves my pockets empty, saves me from having to get up to get things in and out of my carryon, and I suppose also adds a little security if I were worried about that sort of thing.

I have travelled quite a lot on both cheap and expensive flights and have never witnessed or heard about theft on the flights, even the cheapest of low-cost flights, although that doesn't mean it doesn't happen.

I have, however, sometimes wondered the same thing when travelling long-haul to notorious destinations like Mexico/Colombia. Things I have considered in order to make my travel more secure are mainly around keeping what I care about close to me (eg. phones, tablets, laptops), either on my person (pockets) or beneath the seat in front of me.

I wouldn't consider a BA flight to America a risky flight. You'll be able to gauge the character of the people sitting around you pretty quickly and you'll more than likely be reassured that they would be as alarmed as you of someone rummaging around an overhead bin that didn't contain their luggage.

Ultimately though, there's always going to be a small risk, and if you can't afford to replace something you either have to keep it close or not take it at all.

A note about checked-in luggage. I never put a lock on my suitcases, since the TSA or equivalent can cut locks off or cut into bags if necessary, and a thief can easily get into a bag. I do put valuable items into my suitcase but never anything too significant (expensive/heavy chargers rather than an SLR/laptop). This is party because of the risk of baggage or item loss, but mostly because of the risk of damage from careless baggage handling.

Not the answer you're looking for? Browse other questions tagged electronic-items security aircraft or ask your own question.