Is there a map or resource that represents the distance in terms of time instead of Km or Miles?

Based on this question I started wondering if there is a world map (or local maps) that reflect the distance between points in terms of time to travel and not Km or Miles.

I know such resource is not easy and it depends on a lot of variables. It will also show a completely different world. But I think it can be very useful to choose destinations and start high-level travel planning.

Such a map is impossible, or at least it cannot be consistent. It might be possible on a 3D map.

Mathematically, I think this is because you cannot form a consistent metric based on travel distance since it cannot always satisfy the triangle inequality.

For example, imagine you have a mountainous natural reserve with a resort town in the middle, and around it there are 3 cities. The cities are linked by fast highways or train lines that encircle the nature reserve, so traveling between the cities takes only 1 hour. Each city also has a slow, winding road over which the resort can be reached in 2 hours.

On your map, the resort has to be twice as far away from each of the cities as they are from each other - but still be located in their middle! That's simply not geometrically possible.

Interesting question! It is not necessarily an impossible task to create an informative visualization that will satisfy your information need. Yes if you limit yourself to old-fashioned 2d plotting, but in the world of Hans Rosling and d3.js a lot becomes possible, as long as you have the data. It might be impossible today, due to obscurity most of that data is currently hidden. With the same way of thinking I asked a question on quora. I wanted to know what an average drive-through speed is of a given highway/road/route. Once you have that data you can easily represent distances in terms of time.

In answer given, Inrix traffic is mentioned. Unfortunately, INRIX is limited to the US only and I didn't find their core data yet. So for now I am afraid that there isn't a generic approach globally. That will remain until more and more data becomes open data.

It's been done, and here it is: 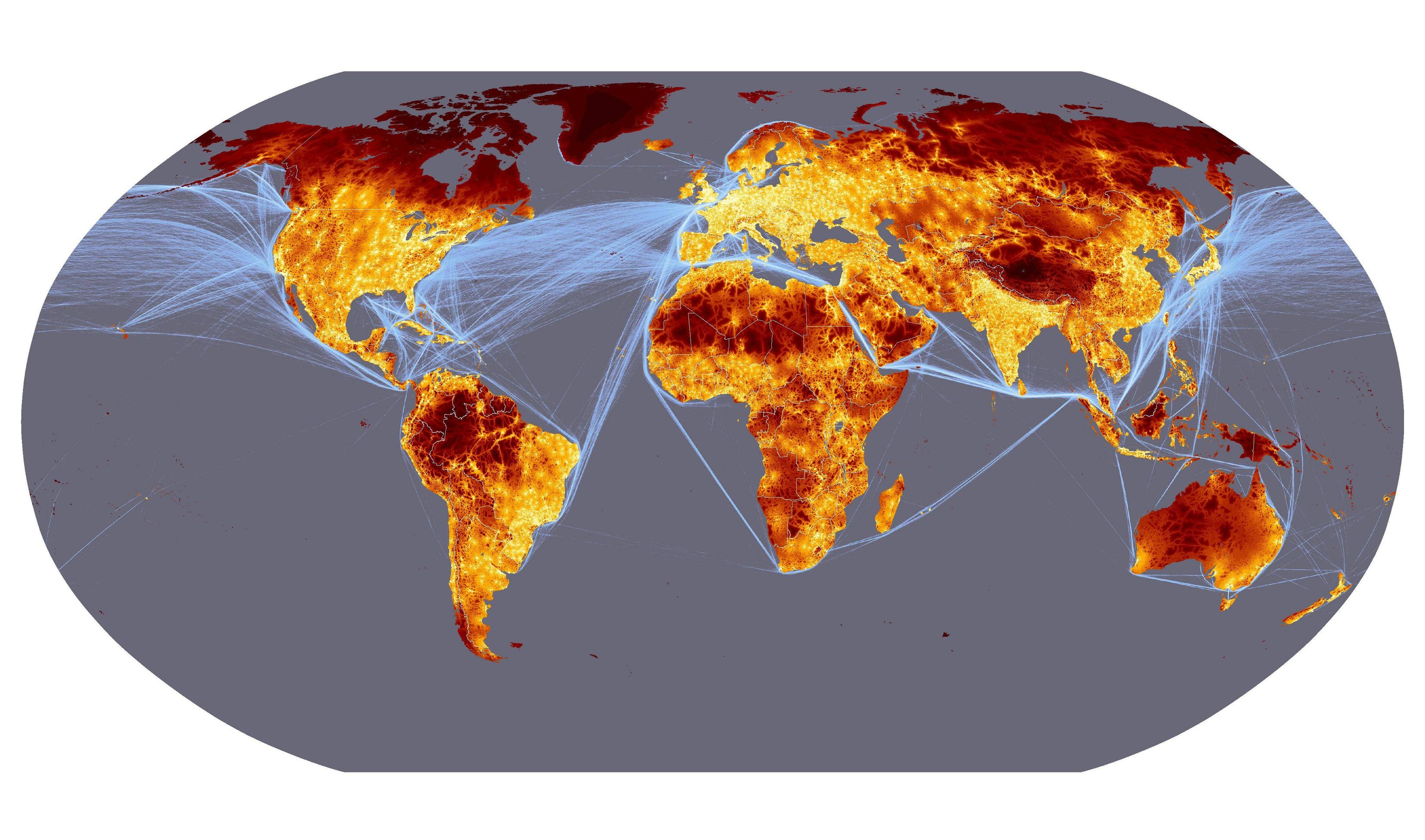 Courtesy Uchida, H. and Nelson, A. Agglomeration Index: Towards a New Measure of Urban Concentration, who came up with this for the World Bank’s World Development Report 2009. Large version here.

Now the major caveat that this map is done with a very simplified model: a city of at least 50,000 people is bright yellow, and as the distance from all cities increases, the color changes to red (24 hours from a major city) and then black (10 days). The white lines are major cargo shipping routes, which is useful if you're a container, but less so if you're a human.

So this doesn't actually account for roads, flight routes, etc, it just approximates them by assuming that lots of people = lots of transport options. Fortunately this is mostly true, although it's not hard to find bugs: eg. coastal Greenland and most of Papua New Guinea is actually fairly easily accessed by plane, whereas much of the Sahara is not, and traveling in India isn't as easy or quick as traveling in (say) central Europe.

(Edit: Oops, just realized SpaceDog already posted this in a comment several days ago. But IMHO it's worth a full answer!)

For travel time maps that uses actual connectivity information, but only work in some cities, check out TriptropNYC (pretty, but very slow and NYC only), Transit Time NYC (rougher approximations, fast, again NYC only) and Mapnificent (lots of cities, but only shows a 'boundary' of how far you can get in X minutes).

It isn't a printed thing you can hang on a wall, but Microsoft's Streets and Trips has an interesting feature that can give you something really close.

Given a starting point (and assuming an automobile), it can draw a polygon of all points that are a specified number of minutes away. If I were to give it my address and say 60 minutes, it would calculate the distance along every possible route from that point, then connect the dots to make a polygon of that time. As travel times are always between two points, you would really need to approximate time to travel in such a fashion.

Trying to get a paper version of this would require a single starting point in any event. As such, you'd have to find a visualization for each point that you might want to start from in order to color code appropriately. Because this doesn't lend itself to the economies of printing, you can safely assume the thing isn't available for purchase. That said, it doesn't mean you couldn't build it and print it yourself using a tool like this.

Isochrone maps for a bunch of European cities:

Not the answer you're looking for? Browse other questions tagged online-resources planning maps or ask your own question.

8
How can I find out what places in Central Europre can be reached in a given time from a city by public transport?

8
Interactive map for mixed bus-and-walking journeys in Greater London
8
Tool like Google Maps Engine (My Maps)
6
Is there an online map or other resource that lists windmills in the Netherlands?
8
Is there a resource that lists dark sky reserves or similar places?
4
Is there a map that shows the progression of the monsoon in India according to time?
2
Is there a good resource that would help to estimate and compare travel expenses by city?
15
Is there really a line that separates Mongolia from China?
5
Is there a map showing historical average precipitation at a specific time of year?
17
Last fuel stop before airport