Renting a van for 6-7 people in Australia

I'm looking to travel with my elderly mother, my wife and other family members, across the southeast part of Australia, from Sydney to Adelaide, taking about a week. We may have 6 or 7 in our party.

I presume I could rent a van in Sydney and drop it off in Adelaide?

With the size of our party and the driving distance, an alternative would be to look for a week-long tour that would begin in Sydney and end at Adelaide.

Any suggestions? Is it easy to rent a van in Australia? Where might I go to look for a tour of the southeast, as an alternative?

(FYI -- This will be my first visit to Australia, so any advice is appreciated! I'm from the US, where I drive on the right, but I've driven all across the UK, driving on the left, so I'm not too worried about the driving. But I am concerned about taking care of everyone in my party.)

It's fairly easy to rent a van in Australia. I don't see why it should be a concern. Although there are some other privileges which might cost dear to your pocket. A good idea is to consider the following when booking a car:

It is very easy to rent a van in Australia. Most major rental agencies offer vans and there are no additional driving requirements on them over a standard car. They will also have locations in both Sydney and Adelaide for one way rentals.

Whether you drive or not is really dependent on what you want to see. Driving gives you a lot more options like the Great Ocean Road and seeing whatever else you wish to see along the way. I wouldn't bother with a tour because they tend to just add costs for what would be a very easy drive.

Having done the drive from Sydney down to Melbourne and out along the Great Ocean Road (with a lap of Tasmania in between) the main comment is to always be aware of your fuel situation - it can be a long distance between petrol stations sometimes, though a lot less likely in the relatively heavily populated south-east. Driving is the best way to get around Australia as a lot of the small towns have a great local character and some of the best panoramas, historic buildings and food around. Of course, a lot also have none of the above.

Another option would be a train (the Indian Pacific goes directly from Sydney to Adelaide) but that is very much a point to point trip, rather than actually getting to see south-east Australia.

As dianod says, van rental is easy in Australia. While there are many hire companies, the vehicles are usually supplied by a relatively small number of rental companies. eg Britz supply vans to literally dozens of hire companies who differentiate themselves by information packs or optional extra equipment etc.

I'd choose a van over train etc - the ability to be flexible is valuable. A tour may be an option if that suits you. You are much more constrained in time spent and what you see - but have the decisions on accommodation and access fees and where to go sorted out for you. You can probably get an Oz travel agent to arrange details such as accommodation ect when you self drive.

I'd recommend using a reputable van hire company with good user feedback. There are some companies who offer older vehicles or who do minimum maintenance or who may be liable to attempt to charge you for minor damage which may have been present already.

Most companies allow one-way travel between selected destinations but a one way fee may be charged. We paid $300 extra to pickup in Adelaide and drop off in Alice Springs (see below), but something as main stream and bidirectional in demand as sydney to Adelaide MAY not incur a one way fee.

One point to be aware of is the tiered insurance scheme. You can possibly choose no insurance (don't do it) or a low rate with immense excess or higher rates with lower excesses or notionally no excess at all. BUT read ALL the fine print. Even the top "no worries" deal we saw did NOT cover everything - single vehicle roll over was not covered - and an event would have cost $3500 or maybe more. How likely is single vehicle roll over? Varies with vehicle and route, but Britz told us they had had 3 in the last month. Australia is usually a safe enough place to drive - but at dusk and maybe dawn you may meet a kangaroo - and maybe any other time. We almost got one. Sits by roadside as van approaches. Sit wait sit wait sit hop hop hop ... across the van's path. 100 kph to zero squealing stop. Just missed! Whew. On your route you'll not see camels :-). Probably no bulls. Probably will see kangaroos. Pay the $100 extra ! And this still MAY not include immersion damage. Read the fine print.

My wife and I recently did a 9 day drive in a hired camper van from Adelaide to Alice Springs. The van was a Britz supplied one via one of the many Adelaide van hire outlets. The van itself was excellent and Britz standards are good. I did have a few minor disagreements with them over the hiring terms, but they are probably as reputable and trustable as any. (I have no connection of any sort with Britz - but if I was hiring a van in Australia they would be near the top of my list to start with).

On another trip we hired a Mitsubishi Outlander (4 people) from Thrifty and were very happy with their service. A high level behind-the-scenes manager approved an arrangement which made all the difference on our journey, when no other company would do so. (This allowed us to visit Glengarry on outback roads).

There is a company named "Wicked" who paint their vans with large and amusing and/or vulgar slogans. Some of their vans are very low spec with somewhat reduced prices. I'll not say bad things about them in public, but I'd not recommend them. We hired one of their vans once in NZ and while we got a good price with a special deal it cost far more than expected and the van was "interesting" at least. Another company is named "Spaceships" and they also seem to aim at the lower end of the market. I've had no dealings with them.

I'm happy top answer questions on list if appropriate or see my profile page for email address if more appropriate.

Braking hard. A closer run thing than it appears: 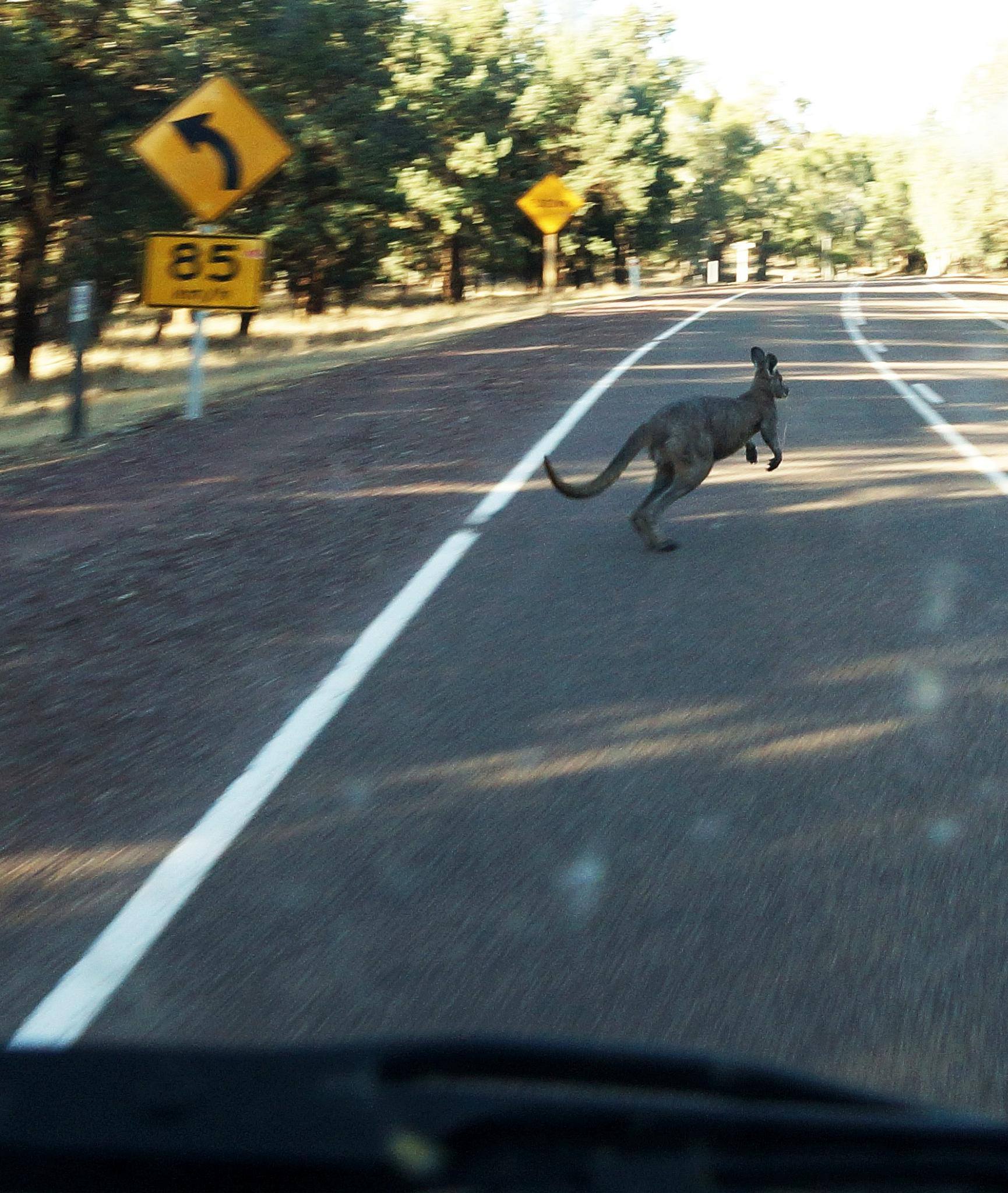 Small animals: DO NOT swerve. Brake hard as seems safe. Steer straight. Seek to straddle lizards (rare in south). Birds will look after themselves. Veering for a kangaroo is unlikely to be a good idea.
Road Train: You won't see any, probably. Keep left, steer straight, be aware of sudden buffeting at start and end of passing.
If overtaking, allow 1 km to pass !!! (really). 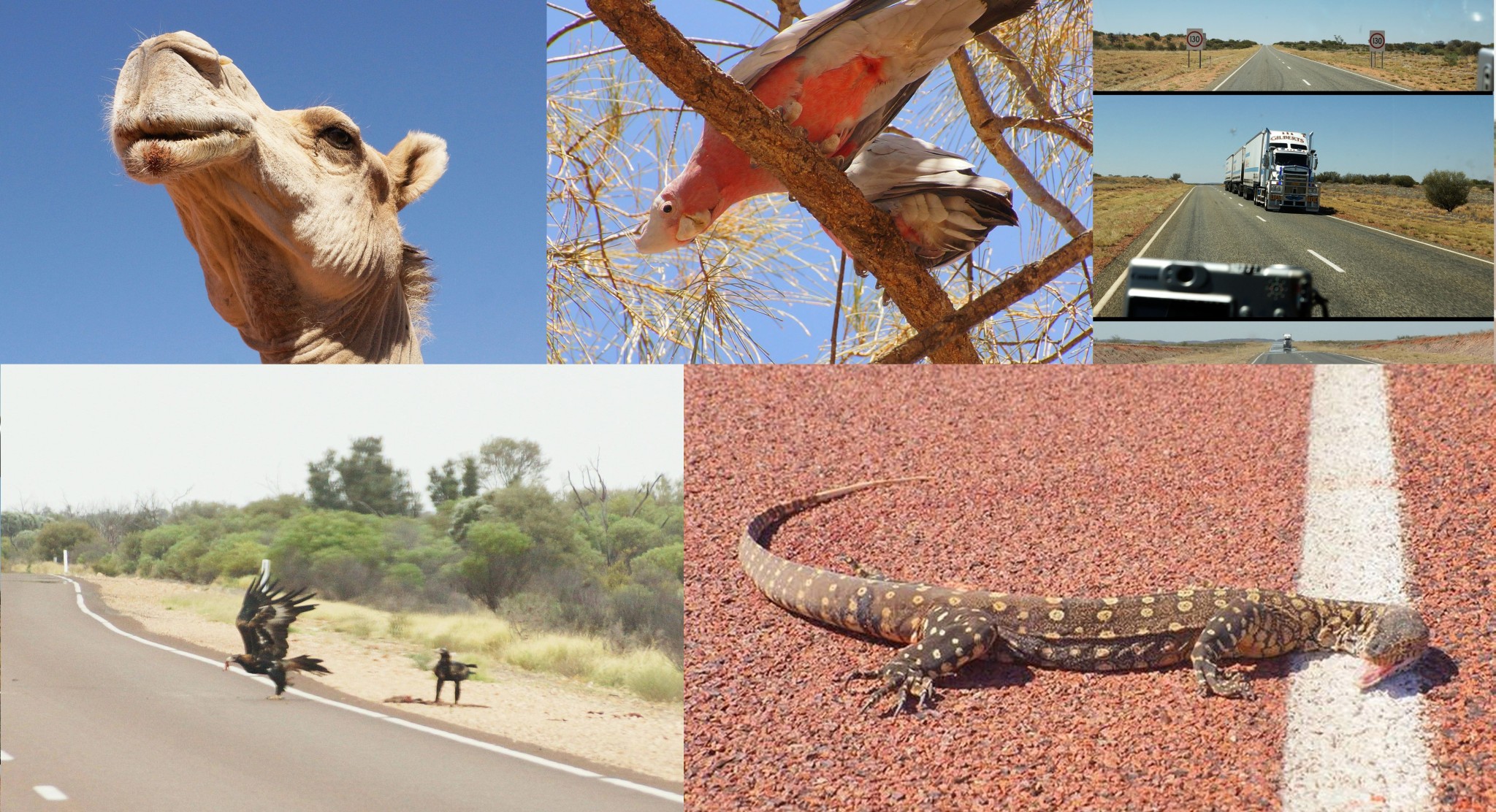 Not the answer you're looking for? Browse other questions tagged australia driving car-rentals automobiles melbourne or ask your own question.

6
Long stopover time in Melbourne Airport
20
What are the fake police checkpoints in Mexico looking for?
11
Driving license in Australia
5
Options for Cooking while visiting Australia
7
Recommendations on Car Hire and Train Travel for a UK trip in March 2013?
2
Can I drive a van in Australia on my UK full driving licence?
6
Renting a van out of Geneva airport
2
Canadian renting car in Finland and driving sports team members
3
Self-Driving at Kruger National Park: Are there rental car services in or near the park?