How to get from the Helsinki-Vantaa airport into Helsinki city centre?

How to get from the Helsinki-Vantaa airport into Helsinki city centre quickly and without paying too much for it?

Bonus question: how about if the flight arrives in the wee hours (say, at 03:00 am)?

A taxi is always a convenient option, of course, but it's far from cheap (around 35-40€). There are some fixed rate / shared taxi services too that are slightly cheaper (e.g. Airport Taxi, "from 19.50€").

Edit: updated for 2015. Note that slightly different 615 and 620 timetables may apply in the middle of the summer. Check the Journey Planner to make sure, as it always has up-to-date info on the HSL services.

The new Ring Rail Line opens this summer, bringing a rail connection between the airport and central Helsinki. It won’t really be faster than the current buses, but it’s probably easier, more straightforward for the occasional visitor.

As you can see in the schematic map below, you can take either I train or P train no matter which way you're going. To optimise travel time (save 5 minutes), choose I train from Helsinki and P train from airport. Both trains will run every 10 minutes in the daytime. 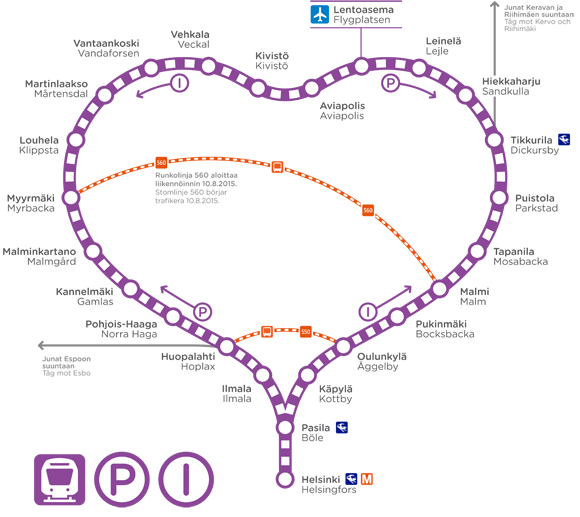 (NB: at least some bus of the existing bus lines will remain in operation and may be valid options even after the Ring Line opens. I’ll update this with more details later.)

Not the answer you're looking for? Browse other questions tagged public-transport airport-transfer finland helsinki hel or ask your own question.

15
Feeling the spirit of Helsinki, where?
8
Visiting Helsinki during 5h wait between flights

12
Getting from Berlin Tegel Airport to downtown
7
Getting from Düsseldorf airport to the city centre
6
Can you get from Nice Airport to near Gare de Nice Ville around midnight by public transport?
6
Are there any places to sleep in Helsinki Vantaa airport the night before an early flight?
2
Transit visa at Helsinki airport
8
How can you get to Munich city centre from MUC terminal 2 and how long does it take?
6
How to get to Munich from Helsinki?
3
When transferring from non-Schengen EU airport to a Schengen airport, do I need to go through security at the connection airport?
6
How can I find out what is the cheapest taxi from Helsinki airport?