When walking on the road, is it safer to walk in the same or opposite direction as the traffic?

When you are walking on the road anywhere (any country, city, etc),

Which is safer? Walking in the direction of traffic or in opposite direction to traffic?

Initially you wouldn't be seeing the vehicle and vehicles will start behind you and pass next to you and away from you (at this stage you can see the vehicle/s).

You can see the vehicle in front of you. It will be approach toward you and passes by you and goes behind you (at this stage you wouldn't see the vehicle).

From EU traffic rules for pedestrians:

So as you said when you walk in opposite direction of the traffic, you can see the approaching vehicles in front of you. OK, you don't see them after they pass you, but at this moment (almost) all danger is past.

All other answers are correct, but I think there is one exception:

In a sharp corner with limited visibility, walk in the outer corner, regardless of traffic direction 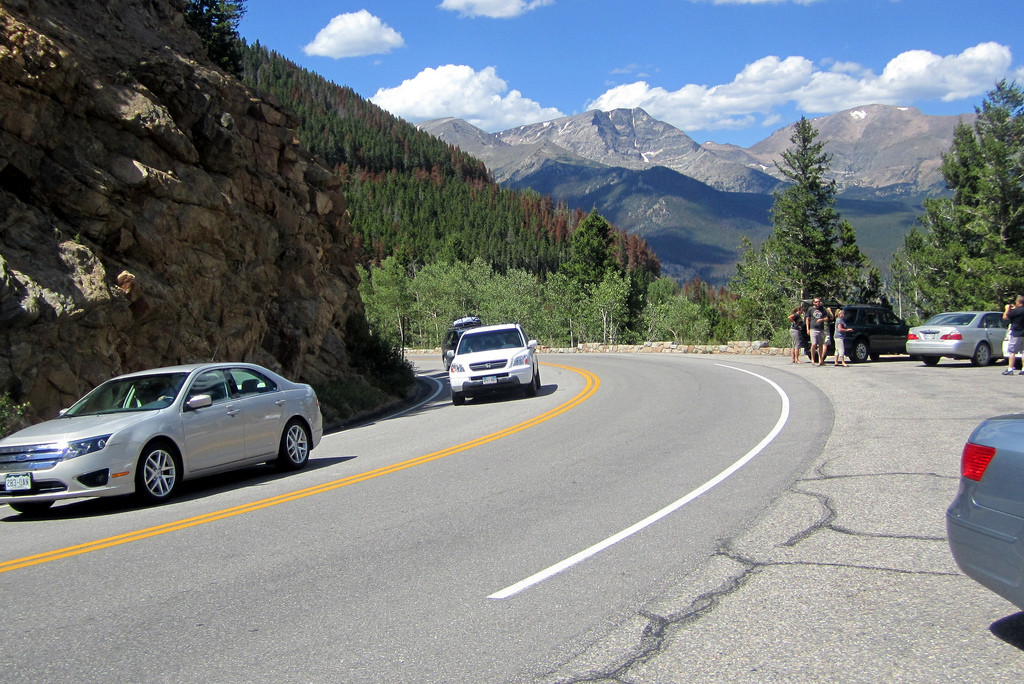 When you're walking here, it's safer to go in the outer corner, than in the inner corner, even if this violates the rule to face traffic. Firstly, in the inner corner, you won't see upcoming traffic and it won't see you. Secondly, you have no space to move to the side. Cross the road at a safe distance from the curve, walk through the outer curve, and cross back again at a safe distance. You should be extra careful during this segment, because drivers may not expect pedestrians on the right side of the road.

In rural North America, roads without sidewalks (aka pavements) are common. In fact, so are unpaved (gravel) roads, and in winter roads narrowed by snowbanks. School children in Canada are taught to walk facing traffic: 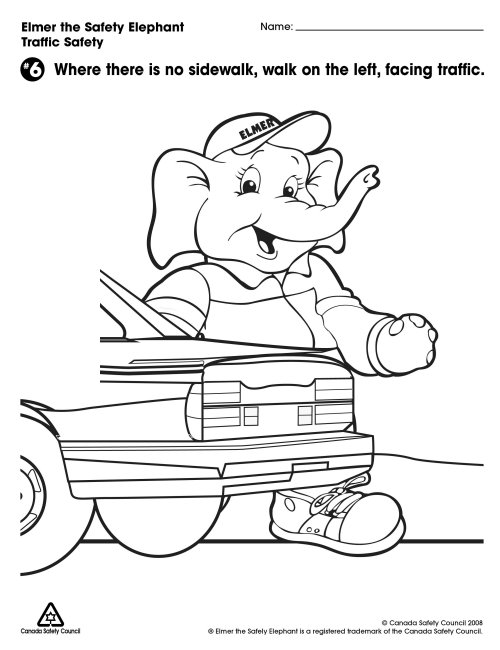 From colouring pages by Elmer.

There simply is no debate. Not being able to see a car that has already passed you is irrelevant. Walk facing traffic.

From the UK Highway Code:

Pavements (including any path along the side of a road) should be used if provided. Where possible, avoid being next to the kerb with your back to the traffic. If you have to step into the road, look both ways first. Always show due care and consideration for others.

If there is no pavement, keep to the right-hand side of the road so that you can see oncoming traffic. You should take extra care and

It may be safer to cross the road well before a sharp right-hand bend so that oncoming traffic has a better chance of seeing you. Cross back after the bend.

Bearing in mind that the UK is left-hand traffic, this says to walk against the traffic.

Against traffic. Even with a pavement this is advised on several websites, for example, saferoutesinfo, which points out the two major reasons:

Generally, however, any local laws on this matter only come into play if there's no pavement/sidewalk and you're forced to walk on the road. If you're on the pavement it makes sense to follow this system, but the law doesn't preclude you from choosing to walk on the alternate side.

Whatever the country, face the oncoming traffic, on their side of the road.

Humans are predisposed to notice faces. You see them, they (so long as they're alert) see you.
Both have more time to react to the other's presence.

On occasion, when approaching a blind corner, especially on country lanes with hedgerows, it may be advisable to move out into the carriageway a little to give oncoming drivers advanced warning of your presence. This also gives you somewhere to go back to if the driver doesn't react quickly enough.

I cannot think of any good reason whatever to have traffic coming up behind you.

There are two more rules one should observe:

I always prefer being on the left side of the road in direction of traffic, because I could see the cars coming in case something seems weird I could try to escape from any event if not is possible or there are too many curves I would be on the other side.

By Portuguese pedestrian laws however you should always face towards the road and have your back facing the vehicles coming in your direction.

As a general rule of thumb, walk facing the oncoming traffic, both on and off pavement. In India, vehicles are right hand drive and they move through the left side of the road, pedestrians are advised to keep the right side of the road. Hence, specifics depends on your country.

I just asked a police officer today if it was safer when walking in street to walk facing the traffic or in front of oncoming vehicles. He said better in front of traffic. But last week, I got an entirely different answer from another police officer. I guess I should go to the dept. of motor vehicles. But it only makes sense to me that it is safer to be able to see oncoming traffic then guessing, especially if you are listening to music. In that case, you may not be abe to even hear traffic behind you. I will continue to walk toward oncoming traffic. I do feel uncomfortable when I know a car might be coming up behind me at any moment!!!

20
How to cross a road by foot in a country that drives on the "other" side of the road
39
Do pedestrians imitate automotive traffic?
9
Should I walk facing traffic when walking on a bike trail?

4
On Algonquin Park's Walking Trails, how likely are you to encounter and be threatened by dangerous animals?
36
How to deal with a fear of driving?
14
Should I turn down the high beam in "deer areas"?
9
How can I find people to walk/hike with in the USA when travelling alone?
7
Walk from Vladivostok Airport to nearest hotel
9
Should I walk facing traffic when walking on a bike trail?
29
How should a pedestrian walk across a busy road in the USA?