How can I see the Berlin Wall?

What, if anything, is left of the Berlin Wall, and where and how can I see it?

Is there any official monument and/or museum I should include in my visit as well?

Checkpoint Charlie is probably worth seeing anyway but it's very touristy and not quite a piece of the Berlin Wall: The checkpoint has been rebuilt and stands alone in the middle of the street. Incidentally, it became a symbol for several reasons but it was mostly notable as the only checkpoint for members of the allied forces. Other border crossings existed for Germans, including the one at Bornholmer Straße which was the first to open in the night of November 9, 1989 (East Germans – who were actually hopping to cross the border and not merely going for symbolic value – rushed to that one before the Brandenburger Tor or Checkpoint Charlie). Checkpoint Bravo is also still visible on the motorway (not sure if it can be visited).

There are actual pieces of the wall left in several places, including several watchtowers. East Side Gallery is a famous one. It was a part of the “back wall” on the East German side, which means that it wasn't accessible to the public (the Spree river marked the border there). The paintings were made after the fall of the wall in 1990. In walking distance from Checkpoint Charlie, the Topographie des Terrors museum also includes an actual section of the wall.

The Gedenkstätte Berliner Mauer an der Bernauer Straße is perhaps particularly interesting as it is intended as a reminder of what the wall was like, not merely a short piece of painted concrete but actually two walls separated by a no man's land. There is a documentation center there as well. This would be the “official” institutional monument/museum devoted to the wall (the museum at Checkpoint Charlie is a private exhibition and has occasionally been the center of controversies).

Finally, in most of the city, the former border (i.e. the “front wall”, except around Potsdamer Platz, where the stones actually follow the “back wall”) is marked by a discrete row of stones on the street and there is a Berlin Wall trail following it.

Like others have said, Checkpoint Charlie is the main tourist point to go. What I'd suggest is looking at the museum (near the US side of the 'border'). There's a piece of the wall standing there, although I suspect it's been moved from its original location, as you'll see when you continue.

From Checkpoint Charlie, walk towards the 'border crossing', and take a left. Along here you'll come across a long section of the wall, still intact, although crumbling from all the touching and wear and tear. 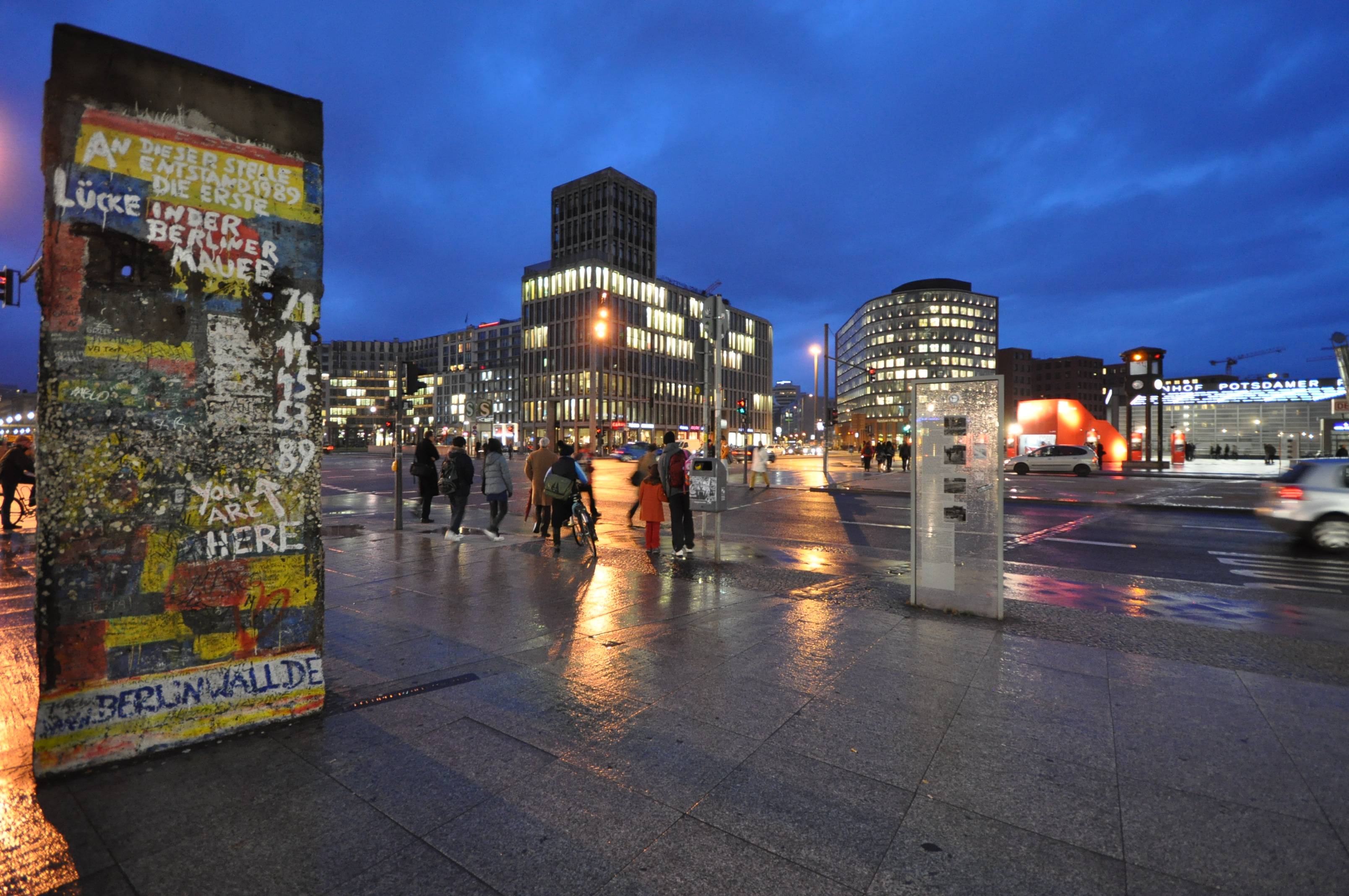 However, you may not really be aware of what you're looking for. What I could suggest is to go to the big square next to the Brandenberg Tor, and look for the free walking tour groups - I used Sandeman's free tour when I was there. They leave several times a day, and the guide I had was doing a masters in European history, and had a really good knowledge of what had gone on. They'll explain where the wall was, what segments mean, how it's changed and point out many things you wouldn't even have realised you were walking past if you didn't have a guide.

There is the Checkpoint Charlie Mauer Museum.

If you are going to visit, you must visit East Side Gallery - the rather long fragment of Berlin Wall, that is painted with artistic graffiti. This is an endangered place - this year there were plans to destroy it, followed by large protests.

Everybody is right in saying you absolutely must visit Checkpoint Charlie, as it is the most touristy and the best in terms of museum. If you want to see the wall intact and some peaceful park space with memorials, please consider going to the Nordbahnhof Station on the S-Bahn or the Bernauer Straße Station on the U-Bahn. There is a long stretch of wall (approx. 30m) still standing, with visible death strip, etc. that runs parallel to Bernauer Straße. This should not be confused with Park Am Nordbahnhof which runs parallel to GartenStraße.

I was just there less than a month ago and visited this exact spot. It is a nice memorial of the wall, those who died attempting to escape and the era as a whole. There are steel pieces of re-bar that fill in the gaps in the wall. You can find more info on the Bernauer Straße memorial here

Here is a photo I took during my trip last month.

Not the answer you're looking for? Browse other questions tagged germany museums berlin landmarks history or ask your own question.

11
Is the Berlin Wall Section on the Sakharov Grounds Accessible at Night?

19
The Great Wall of China: Where should I start a visit?
6
How to use Kurzstrecke ticket to travel from Berlin to Potsdam?
4
What are the recommended concentration camp tours near Berlin?
24
How are validated underground tickets checked in Berlin?
4
Transfer from Tegel Berlin to city center
15
Where in Chengdu can we see Sanxingdui artifacts, besides the museum in Guanghan?
3
Benefit cards combination for Berlin
11
Is the Berlin Wall Section on the Sakharov Grounds Accessible at Night?
8
Are there any museums or sites in England honouring Isaac Newton?