Why does an airline include “seamen” in its list of special requests?

I was trying to book my ticket on-line with PIA when under the special request section I saw the request for a "seaman". What would be your best guess as to what this service entails? 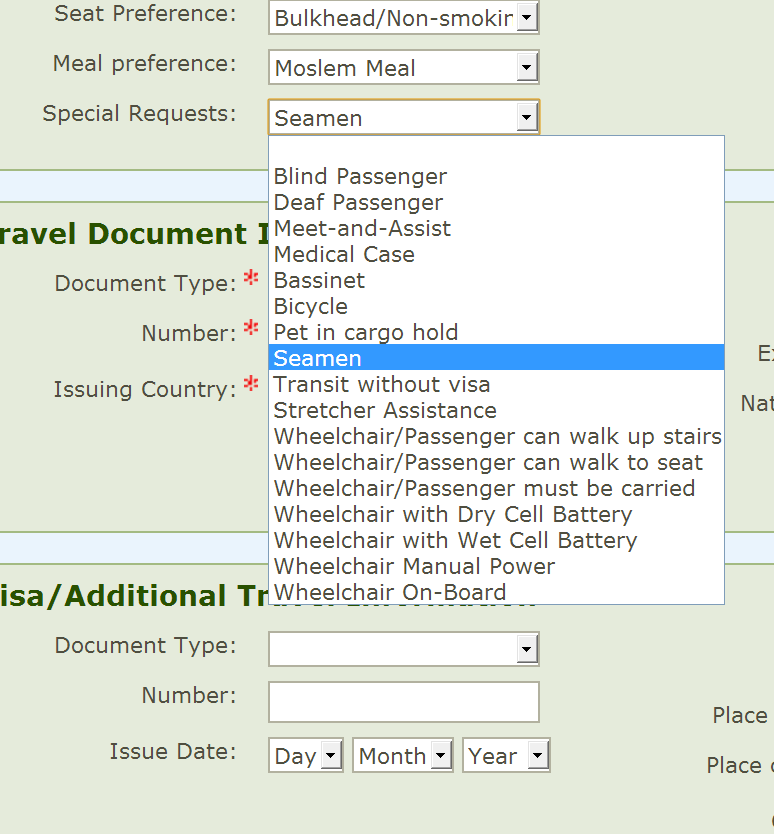 Airlines crew sometimes need to travel from one airport to another as passengers but at the same time they are on duty (in airlines terminology we call that Deadheading). In this case the airlines need to move crew from one airport to another due to operational reasons (like bringing new aircraft or bringing an aircraft after being grounded for technical reasons for some time). Sometimes the airlines put the crew as deadhead on another airline as well. Same thing goes for seamen too, they need to be relocated from one location to another from time to time to be part of a crew in a ship located in another area.

My guess is the airlines are making the job easier for the seamen because seamen like airline crews use different types of visas unlike normal passengers or even do not have to have visas to many countries. Also, crews and seamen have a special arrangement with immigration authorities so they might mark them in the system in advance so when the information is passed to the destination country using APIS it will include that they are seamen and part of a crew.

Sailors who are travelling for duty travel often travel with a seaman's log book instead of their passport. This means that at check-in, they must often produce valid credentials including the name of their ship and its itinerary. Otherwise they cannot be accepted on board a flight. Most airlines give very privileged treatment to passengers with this SSR, but the code also stands as a warning to check in staff to verify the log book and ship manifest which SEMN are obliged to carry.

Not the answer you're looking for? Browse other questions tagged air-travel paperwork terminology services or ask your own question.

14
Do I need a visa if I travel from Paris to Amsterdam if I entered as Crew Member?

14
Where can I find air-fare predictions?
6
Why does Orbitz continually show flights that don't exist?
10
Does booking directly from an airline improve customer service in resolving problems?
5
Are mixed classes possible on a single ticket for a single passenger?
15
What does the flight jargon “fare class” actually mean? Is it the same as either “fare basis (code)” or “travel class”?
5
Trouble with LAN (airline) refund - explanation of ticket fare policy codes
15
Are there “traditional” travel agents receiving requests online for ITA fares?
3
Airfare booking class, sub-class and perks
70
Why do airlines offer more varieties of special-request meals than they actually provide?
24
What’s the point of flight ticket cancellation charges?