What happens if you don't have a passport photo when you get to the Laos border for a visa-on-arrival?

I've read online that one of the requirements for getting the visa-on-arrival when entering Laos at a border crossing is that you must have a passport photo.

But what happens if you are unaware of this rule, forget to obtain one, or try to get one without success before making it to the border?

If you don't have photos you will be asked to pay a small fee (few dollars) for scanning your photograph from your passport, and placing it onto your visa application form.

Another opinion from wikitravel:

passport photo is/may be required (although you may be able to pay a US$1 "fee" to have this requirement waived) - recently (June 2013) passport photos were not asked for (at Friendship Bridge).

When I got off the bus that takes you across the Thai-Lao Friendship Bridge, I was the only person who needed a visa-on-arrival so I thought it would be quick. But I arrived during the "dinner break" of the people doing that job and had to wait around for twenty minutes!

Only when the guy eventually appeared could I get the entry forms, which took some more time to fill out. But the guy was cheerful and his English was good. I told him I didn't have the photo mentioned on the form and he said:

I also left some fields blank on the form such as previous and next destination, which are fuzzy or unknown since I'm hitchhiking without a plan and because I didn't know where I'd been staying and there fields for address and phone number where you're staying, and also of a Lao contact.

This was also no problem.

I was concerned "no problem" might mean some unofficial charge was coming up. They did not have a camera and did not take my photo (unless they took it from a security camera), and there is no photo on the visa itself.

The charges were only: 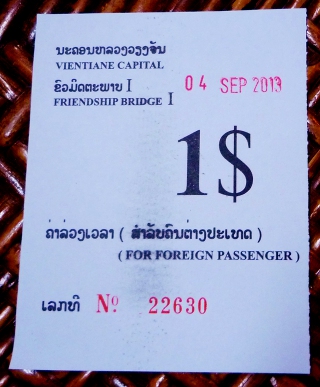 The fees should be paid in USD. If you pay in Thai Baht you will be required to pay 40 baht per dollar. For comparison, the actual exchange rate today is 32.25 Baht per dollar. I didn't bring any $1 bills so paid only the bridge fee in baht.

Some other people may have paid a photo fee but I doubt it. Some nationalities might need the photo, but as an Australian it was no problem and there were no fees or bribes.

I arrived at the Friendship Bridge without a photo and was charged 20 baht. Not sure they scanned it, but most likely they did and I did not receive a receipt. Not a problem, however, I got in with no difficulty and they were pleasant. It went fast, no delays.

Not the answer you're looking for? Browse other questions tagged regulations borders southeast-asia visas-on-arrival laos or ask your own question.

18
What happens if RFID system in my "biometric" travel passport malfunctions when I cross the border?
9
Does the Lao visa on arrival at the Thai border require a full blank passport page for Australians?
1
Belize visa on arrival from the western border
6
Laos visa-on-arrival for Indian Citizens: Is it also available at land border crossings?
9
Can I get a Lao visa on arrival when crossing the border from Vietnam at Bo Y / Phou Keua?
4
Does the entry into Laos from China at the Mohan/Boten crossing have any extra fee besides the $30 visa-on-arrival fee?