Mount Everest without the crowd

I'm looking to trek to Base camp Mount Everest in the next year, I'm just wondering what the best time of the year would be to avoid the huge crowds I keep hearing about. I don't care if its absolutely freezing just trying to avoid huge numbers of people.

Trekking around the general area is possible around the year, but the weather is of course something to be worried about.

Here is a monthly temperature chart of the base camp. This should give you an idea, minus 36 degrees celsius is surely something to write home about. The issue however will be the snow rather than the temperature. According to Wikitravel, you might face the issue of closed camps and too much snow coming to the highest points towards the base camp. So the more you think you can deal with hiking more on the hope to just get as far as you can according to the current weather conditions instead of insisting to get to the base camp, you can simply choose one of the winter months when the peak hikes will be closed. You will not have the masses of tourists, but you might need a good guide to advise you how far it is safe to go without endangering your health.

Regarding the crowds, there will be two general types of tourists: The people trying to climb the peak and the people who are trekking in the area just like you plan to. Since a lot of Everest hikers do it for the "I have been there"-cred, the direct lines between the airstrip in Lukla, the base camp and the peak will be the most crowded ones. There seem to be 30,000 of them every year according to the New York Times. But also they say that most of them do the Airstrip-Base Camp hike.

So the question that you have to ask yourself is how important is it to you to actually go to the base camp. You might simply be much better off hiking to other places in the area, have very little tourism around you and enjoy pristine nature without endangering your life. Here is another report of people who took an alternative trek, and companies are offering treks around the area to specifically avoid the crowds.

I will be there in October myself, going with a friend who has been there twice already. We will not be visiting the base camp because of the mass-tourism out there.

From my overall travel experience I can name you many places in the world where giving up on the famous locations that everyone talks about gives you a better experience by side-stepping the crowds rather than insisting on the trophy destinations. Around Everest, this is especially true, given the fact that the area suitable for hiking is so huge and the fame of the mountain is the height of the peak, not the beauty of the base camp.

So I guarantee that those are going to be the busiest times, as people go for the best weather, conditions and not-too-freezing temperatures.

So if you're looking to avoid those, you'll want to go outside of these two windows.

MountainKingdom suggests that if you want to avoid crowds:

Perhaps the very best time of the year though to go is mid-late November when trails and tea houses see fewer trekkers and the weather is mainly fine and clear during the day, providing wonderful views at every step. It will be colder though, especially at night and at higher altitudes, but well-layered clothing, a good four-season sleeping bag and a warm duvet jacket will help keep you snug. And, being a bit chilly, is a small price to pay to escape the crowds.

He also points out that if you can handle the cold, Christmas is a fun time to go, but I suspect that will draw others during their Christmas break.

As a matter of fact, this questions was asked frequently in the forum and I guess this is very important to know for all Everest Base Camp hiking enthusiastic. During the busy season (October, November - March, April) over 500 tourist fly to Lukla makes this trail one of the busiest trails in Nepal. Roughly Over 40k tourist travel EBC in a yearly basis. 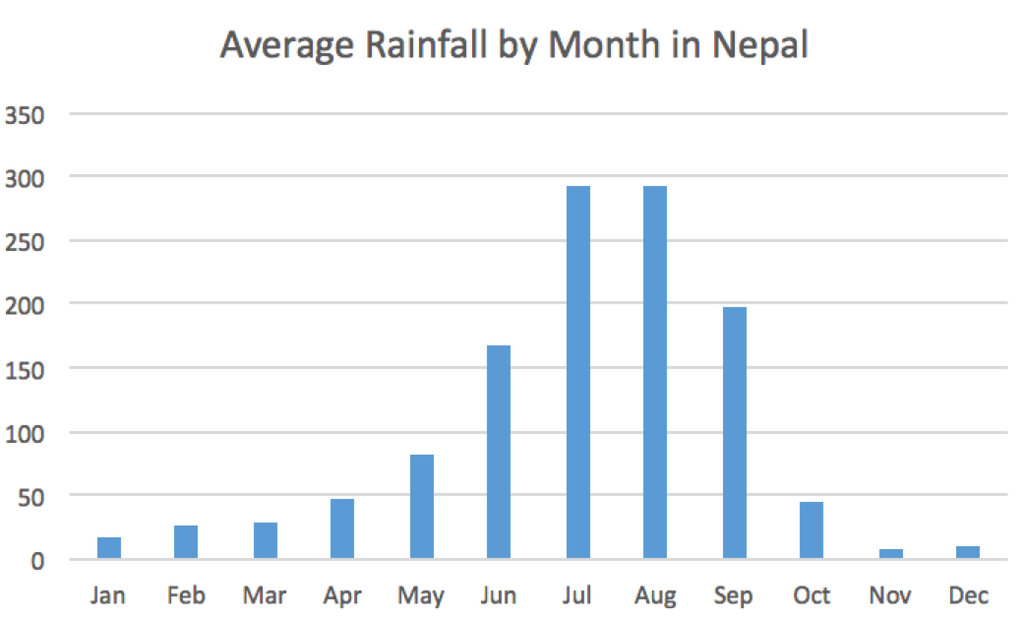 September let me come to the point, A lot of online and even Wikipedia says September is the best and less crowd in the Everest Himalayas. As a matter of fact it is less crowded but certainly, it's not a good time. Past couple of years due to the none stop Monson making harder to catch the flight to Lukla during the September also the sky is not clear as it supposed to be. Especially the trek is being more challenging in the month of September after the [landslide took lives of 4 Spainese tourists in Mount Manaslu region (The 8th Highest mountain in the world) December This is probably the best time as the sky will be nice and clear and especially EBC Trek has a much low crowd during the month of December. I would Highly recommend EBC during the month of December If you are thinking of avoiding the crowds and the winter in Nepal will not start until the first week of January. May The month of May is also considered the best time of year to trek Everest Base Camp. As the monsoon hasn't started yet and remained spring season also pushing a best and clear sky. if you really want to avoid the traffic the month of May to until 2nd week of June is the best time.

Not the answer you're looking for? Browse other questions tagged trekking nepal mount-everest or ask your own question.