How to prevent the passenger in front of you from reclining without notice?

I can totally understand someone reclining his seat on a long-distance flight. On a short hop, I don’t have any sympathy for anyone using his “right” to recline his seat. The seat pitch on short flights these days make you an anti-social person by default if you choose to recline. I had my share of not being able to even drink a cup of coffee because somebody just wanted to “rest”.

I usually try to reposition my legs as much as possible, not only because I have to, but also to try to make the journey as unpleasant for the rester as it is for me. I’m aware that is just childish behaviour, so I am wondering whether there are more effective and more civilized countermeasures to make the flight pleasant for both of us.

So, there are two mechanical solutions to, what is, fundamentally social problem, but before I provide them, I want to make clear that employing these is an easy way to be regarded as a jerk by your fellow passengers, and not without merit; the seat is designed to recline, and while putting it back can be inconsiderate, restricting the use of the feature by others can be just as inconsiderate on a long flight. Think long and hard about just how much of an asshole you are willing to be before attempting to block the passenger in front of you from taking what small comfort they can in the horrid conditions found in coach class on a commercial airliner.

First, the commercial solution: The Knee Defender. A small device that clips onto the arms supporting the tray table, when the clip is in place, the seat in front of you is unable to recline. It can be adjusted to allow for limited recline, if you're feeling considerate, but the 'courtesy card' provided by the manufacturer should be pretty clear evidence that this is inherently a pretty inconsiderate product.

If, in addition to being a jerk, you're also a cheapskate, you might want to look into using a water bottle or other, similarly sized rigid object as a shim to prevent the seat in front of you from reclining. Like the Knee Defender, this has the downside of requiring that you keep your tray table down to rescue your precious legroom, and, unlike the Knee Defender, also will take up some space on the tray table, which may or may not bother you. It is similarly inconsiderate to use.

Alternately, you could be less of a jerk, and pay the often pretty nominal premium to get a bulkhead facing/exit row seat, where nobody is in front of you to recline.

No, you do not have any right to stop the person in front from reclining, and yes, it's childish behaviour on your part to try to stop them. Everybody on a plane has the right to recline their own seat, and flight attendants can and will enforce this if asked.

You put "rest" in quotation marks, but maybe they really do need to recline: they might be sick, connecting from a 17-hour flight spent next to a screaming baby, any number of things that are really none of your business. I've reclined and slept like a baby on a short-hop SFO-PHX flight... because I just flew in from NRT and didn't manage to sleep a wink.

The one useful thing you can do to create a bit more space for yourself is to recline your own seat.

Lifehacker actually has a post about ways to find out which seats are actually non-reclining, so that you can try and book the seats behind them.

A similar article of theirs shows the (meaner) option of blocking the seat with something like a water bottle. 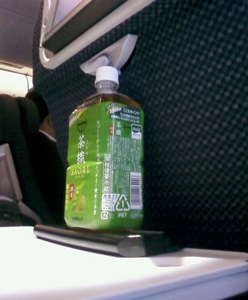 There's the aforementioned Knee Defender, as well, but that's where you start getting controversial, and indeed Northwest, American, and Continental Airlines have banned it.

It helps to remember that nobody is comfortable in economy class, tempers are short, and purposefully preventing someone from reaching that little bit of comfort they believe they're entitled to by reclining may cause a response from them which you may not enjoy...

I just came across "The etiquette of seatbacks and elbow room" It nicely answers the OP. I would suggest to read the full blog, but the ettiquete is outlined as follows:

The blog then continues what to do if you are the victim of an instant recliner:

Personally I think this blog nicely covers the issue form both perspective.

I'm much taller than average and in some airplines it's already tight without reclined chairs in front of me. Thus on most flights I keep my legs in a normal position, which already makes it very difficult for the person in front of me to recline their seat. This is enough for most cases. But not all.

Communication is usually the best way out of this. Explain to the person in front of you that you need the space (standing up has helped me convey that message in most cases) and if needed with the airplane personnel. If there's another chair available they're often happy to help you out.

Unfortunately that doesn't always work out either. I was on a 10+ hour flight with a person in front of me insisting on reclining their seat. My legs are really long and the chair was painfully pushing against my knees. All seats were full. I tried to communicate with the person, in 5 languages, without any kind of response, as if they were deaf. The flight personnel was also mostly ignoring my situation, even though they managed to get some response from the person (so they were not deaf).

I finally just put my legs over the chair in front of me, pointing upward, a situation that lasted for more than half an hour, after which the person somehow came to their senses and moved their chair slightly forward giving me just enough space to keep my legs in a normal position.

One thing to do is to ask for a new seat. Some airplanes may have a few "extras," and give you some choice of seats.

Even if there are no "new seats," the fact that you asked puts the airline on notice that there is a problem. If they're at all on the ball, the cabin crew will talk to the other passenger and try to work out something between the two of you.

8
Can I lean the seat backwards in a bus when a person behind me complains about it?
30
Which airlines ban the use of Knee Defenders during flight?
30
Can you expect the flight attendants to tell the passenger in front of you to put his seat up in normal position?
18
How to avoid claustrophobia on a plane?
5
When in a window seat on a plane, how do I deal with people who want the shade closed?

30
Can you expect the flight attendants to tell the passenger in front of you to put his seat up in normal position?
4
How can I book the plane schedule I want from the USA to Japan?
8
How do you fly on standby without a ticket/boarding pass?
16
Can an airline prevent me from travelling on the first leg of a flight if the second leg is cancelled?
19
Airplane Seat Recline Measurement... in units of length inches?
9
How can I find flights that let me see the 2019 solar eclipse from a plane?
0
How do I prevent an airline from finding out that I am a multinational?