"Safe" typical dishes to order away from the tourist trail in Thailand when English is not supported?

I've found now that away from tourist areas, English is rare in Thailand both spoken and on menus.

I've also found that some of the dishes we in the west think of as typical for Thailand don't seem to be on offer at the kinds of places that don't expect to have "farang" customers. This means "pad thai" and "tom yum" are not available.

Here in Surat Thani there are food places literally everywhere, I have tried a hawkers' stand (as it would be known in Malaysia or Singapore) and two small cafes, they had menus but in Thai only. 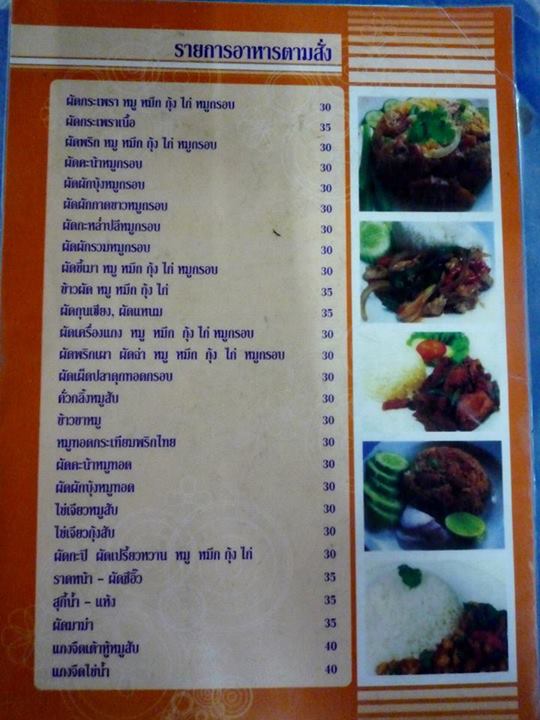 So I don't want to eat what I regard as western food when I could be trying local dishes, even when they're not "fancy". I like spicy food so that's not a problem.

But there are certain ingredients I would like to avoid: organs, eyeballs, chicken feet, gizzards, intestines, rectums, dog, pigs trotters, anything alive. I've seen all of these on menus in other countries in Asia.

I'd also like to avoid anything that has a special reputation for being unclean, spoiled, or having a higher tendency to make people sick. Things like undercooked chicken and pork, things that were probably prepared many hours ago and kept warm, etc

I want to be a bit more adventurous than settling for fried rice - what really is the typical food in these kinds of eateries in Thailand?

First, your fears are a little overblown. Thai cuisine isn't quite as "freaky" as, say, some parts of China and you're unlikely to eat something exotic by accident. Although not eating any offal at all is going to be a little limiting... why not give it a shot and expand your horizons a bit?

At any rate, I'd start with Wikivoyage's description of Thai cuisine and try to learn the major concepts and their Thai spellings. (Or pick up Lonely Planet's Thai phrasebook, it's rather more compact and handy for showing to staff in a pinch.) Some major Thai food words are quite recognizable:

Looking at that menu and I could say you can order any of that and it's pretty safe for "Farang". You can just add "Mai ped" ไม่เผ็ด if you cannot eat spicy food.

The most common thing and probably the safest thing to eat is "Kra pow " For example, "Kra pow Gai (Chicken)", "Kra pow Moo (Pork)". And that's what Thai people eat everyday as well.

If you like curry the correct way to say is "Paneng " which is kaeng daeng or red curry. If you ask for kaeng daeng you might get something else. Or if you like Thai green curry, you should ask for "Kaeng kaew whan " แกงเขียวหวาน.

Something to note, some restaurant cannot cook "Som Tam" You can see if they have a mortar in front of the shop. If they don't have they might be able to cook it for you but it will not be good. That's how we look for when to ask Som Tam.

Not the answer you're looking for? Browse other questions tagged food-and-drink thailand language-barrier local-cuisine or ask your own question.

80
How do you avoid "tourist traps" when traveling to a country where you do not speak the language?
18
How to ask drivers not to take me to the bus station when hitchhiking in Thailand?
1
Thailand Visa On Arrival for Indians when not traveling directly from India