Is the Great Dolomites Road safe to drive in October?

I will be in the Dolomites in early or mid October. I can drive a stick/manual car, but I have little experience driving in snow. Will the Great Dolomites Road be safe to drive?

Note that October is probably not the best season to to this trip due to vicissitudes of weather.

In the alpine regions some roads are closed at that time. Indeed there are roads only accessible during spring and summer. They are closed in October or November and are opened again in April or May. If you want to find you which roads are closed, you can have a look at the Michelin maps. There you will see some transparent rectangles with blue characters saying 11-4, 10-4, etc, as shown below. These are the periods where the roads are closed (November to April, October to April, etc). 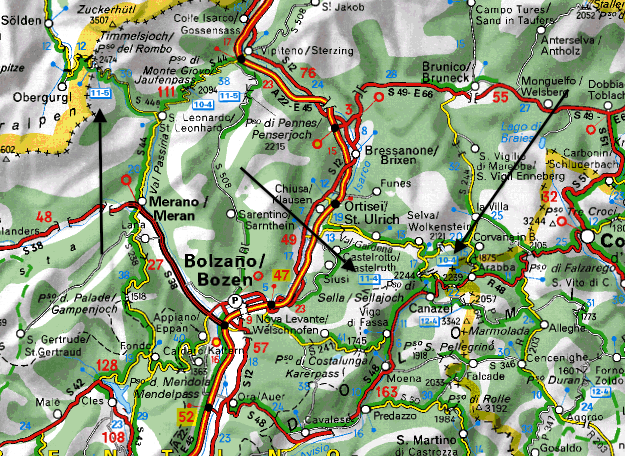 I say this because it was not really clear what the "Great Dolomites Road" refers to. After googling, it seems that it only contains roads which are accessible all year long. In Winter, the roads in alpine region are often in a better condition than roads in flatter regions. In the mountains the operation centers are well equipped and experienced in clearing roads.

This does not mean that it is easy going. You can always get into a snow shower. That can be more silly if you have no experience or if you feel unsafe. So have a look at the weather forecast before starting.

As an alternative, you may consider public transport. I think it is possible to travel by bus along the track you are referring to. But that's another topic.

9
Is the Pamir highway passable in early October?
19
Maps with road drivability grading
4
When should one travel by car instead of train when traveling France?
11
Hearing protection on the road in China
15
Solo driving in Iceland in late March
20
How to cross a road by foot in a country that drives on the "other" side of the road
2
How to visit Colorado mountains during the winter without driving through unsafe road conditions to get to the transit service?
2
Are Italian Dolomites different in landscape and experience compared to Austrian Tyrol region?