Is there Wi-Fi in the ICE trains in Germany?

I will travel from Frankfurt to Berlin by ICE and I wanted to ask if there is Wi-Fi in the trains and how much does it cost?

It's available on most ICE routes, but not all.

Cost wise there it's 4,95€ a day in standard class, though there's a small number of roaming partners with whom you can get online in standard class too (mostly T-Mobile Germany though). It used to be paid-for in first class as well, but as of late 2014, it's now free for first class customers (matching what most other European high speed operators do for their wifi).

DB has a page in English that lists the current routes it's available on, and have a pdf map. (Note that the English language map and pages are older than the German ones!). I believe that as of 2015, most of the major routes should offer it. A (possibly incomplete) list of where it's available, as given on their website, is: 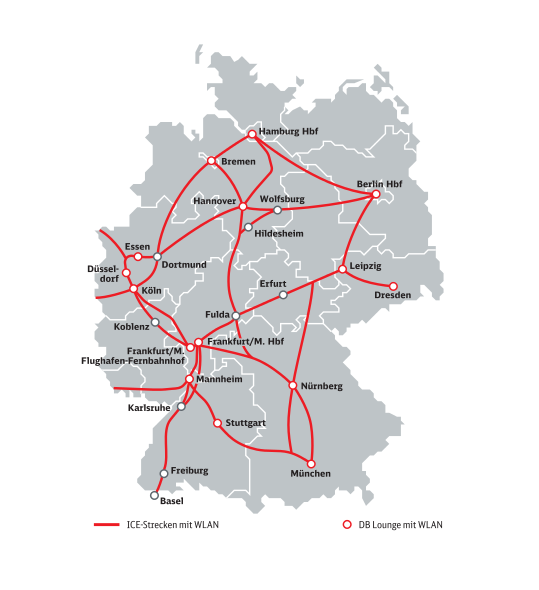 Since 1 January 2017 there is Wi-Fi in all ICE-Trains. From DB-Homepage:

Not the answer you're looking for? Browse other questions tagged trains germany wifi high-speed-rail deutsche-bahn or ask your own question.

9
Deutsche Bahn: Reliable wifi on train?
3
Is complimentary Wi-Fi available on ICE trains outside of Germany?

11
Getting from the Frankfurt-Hahn airport to Saarbrücken (Germany)
14
How to travel (relatively) cheaply with ICE trains in Germany?
10
Can you do a phone call or telconf through Skype or Google Plus when traveling on the ICE in Germany?
13
How can I get the best deal from DeutscheBahn when travelling to other countries in Europe from Frankfurt?
3
Is complimentary Wi-Fi available on ICE trains outside of Germany?
35
How come I see two ICE trains scheduled for the same platform at the same time?
8
How do I book a seat reservation on ICE International, when I already have the ticket?
14
Why was my Deutsche Bahn train "cancelled" and replaced by the same train, but a different number?
10
Which stations in Berlin have ICE connections to Leipzig
5
Reliability data for German trains