How am I supposed to travel with all these hard copy guidebooks?

Following the suggestions of many TA.SE posts, I've purchased two travel guides for each country I'll be staying in (for more comprehensive coverage). But this has lead to an information overload, albeit better than not having enough information. But now I don't know how to take this information with me!

I have read some of the posts here on TA.SE, and I believe one post suggested to get the paperwhite version of the Kindle because of battery life. However, as I have read many of the Rick Steve's and other travel guide reviews, Kindle software doesn't seem advanced enough to allow for smooth interaction. I was wondering if the issues were only with the Kindle paperwhite, or does Kindle HD also have this issue? Even if the Kindle HD didn't have this problem, I would have to worry about the short battery life.

I would be okay with using a netbook or iPad, but as far as I know, there's no way of reading Kindle books on iPads or computers.

The option I don't want to entertain is to bring all these books, especially since I'm backpacking.

Certainly I plan on writing everything down (taking detailed notes of my itinerary and what not), but what if I lose my itinerary? Or what if I happen to need a back up plan or want to find something different? There's just too many "what-ifs."

Keeping packing weight in mind, what is recommended for this dilemma?

UPDATE: All my guidebooks right now are the hard copy books. I will definitely be bringing my iPhone. I can borrow a first generation iPad if needed, and I also have access to a netbook if needed.

I haven't used a hardcopy guidebook for a while. For the last few trips I've taken, I've used my iPhone and Kindle 3G.

Guidebooks on your Kindle (and books in general) are great - much less weight, searchable, and very easy to annotate. The battery life is great too. And if you get a 3G-capable Kindle (roughly $70 more initially for the life of the device), you can buy guidebooks from Amazon from pretty much anywhere in the world even when you don't have wifi. Plus, you get free access to Wikipedia too over the same 3G connection.

However, the graphics are generally terribly compressed. This means that maps often are very difficult to decipher, particularly the street names!

To compensate for that, I often download offline maps and guidebook apps on to my iPhone. The battery life isn't as good, but you would be surprised at how good it is if you only periodically use wifi with no SIM or even just switching off 3G. You could even consider getting a cheap Android phone to use instead to take advantage of a new battery.

If you're using hard-copy guidebooks, try and only carry a guidebook for the country you're going to. As you're backpacking, I'm assuming you'll be staying in hostels a lot of the time. Simply leave the guidebook behind before you leave the country. Often, hostels allow you to swap books too, so drop your guidebook off and pick one up for your next destination if available. I'd also say carrying multiple guidebooks is overkill; ask other travellers if you need more ideas/opinions. A decent hard-copy map is much more useful.

Finally, I don't know how long you're going for, but if you're going for a significant amount of time, say longer than a month, I'd encourage you to have less plans and just see where things take you. Of course have a list of things you want to see and do in each place, but don't tie yourself down to a pre-planned schedule because you'll miss out on all the things that just happen or you discover only when travelling.

On a trip to (among other places) Venice, we had a Kindle with us and a number of paper books. We used the books a LOT and the Kindle far less. But what we used the most was a small bundle of photocopies from one of the books that I had marked up with a highlighter. Maps, for example, with a route drawn or destinations marked. 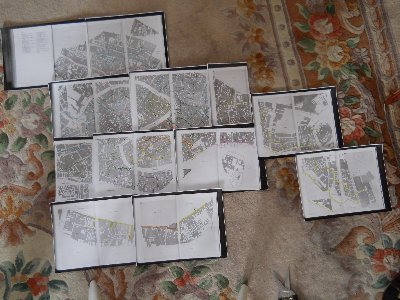 These are the maps from the back of Strolling Through Venice, with each of his routes highlighted in a different colour of marker. You can really only see the orange but we traced them all. I needed the book as well, but we generally had these photocopies in our hand. (Another vital bring-along: on my phone I had the video of how to reach our hotel from the vap stop.) 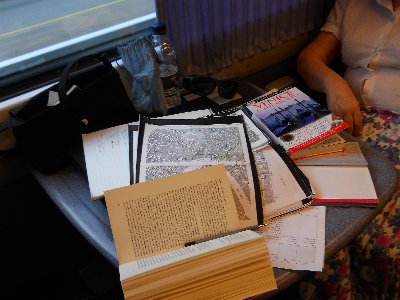 This is an action shot on a train in England using the books. Note pen and paper, printout of a calendar about where we would be on what day, and multiple paper books, as well as the map photocopies.

When I did three whirlwind days in Vegas with my daughter, I prepared a 15 page Word doc with some maps and pictures in it - my own personal guidebook to just the things we wanted to see - and I had it on my phone. I consulted that a lot, and took no other documentation with us.

Preparing these in advance brings the fun of the trip forward, and having them on location lowers what you have to carry and ensures you can find the things you wanted to find. Paper or electronic, make it yourself and if you do a good enough job, leave the books behind.

I would recommend you absolutely NEVER rely on any sort of electronic device while traveling.

The most successful way I've found to keep all this printed information on hand is this :

Are your guidebooks e-books? What format?

On my last trip to India I used a normal Kindle and I had one guidebook in Kindle format (Mobi) and several others as PDFs. The PDFs were a bit of a pain to read on the kindle, the Mobi was better but the maps were sometimes hard to use because they were split into several pages. In terms of usability, nothing beats a real book. The kindle is small and light enough to carry it in your trouser's pocket, the LP for India weights about 1kg.

There are kindle Apps for iOS (iPad) Android, Windows, Mac and who knows what else, so you could read your books on most devices.

You have to think about whether you want to use the device for other purposes as well. With an iOS or Android device, you could also take photos, Skype home, play, browser etc. There are also maps (incl. offline) and if you have one with GPS, you can always know where you are (I rather not, it's cooler to get lost in a foreign country).

Also depending on the countries you are visiting there may be a good Wifi coverage or not. If you are mostly hiking in remote areas you get less Wifi than in populated areas.

Play around with your guide-books on a kindle and see whether they are working for you. If you don't need the other extra features, an e-book reader is the best light option with long battery life.

I've only used a Lonely Planet guidebook once, for Central Asia and I'm willing to admit it was invaluable there.

However, there and elsewhere I observed what I consider sacrilege, but others consider more...practical, and that's to rip irrelevant pages out of the book. If you've got a Europe guide book and you're not going to Latvia - RIP, out comes that page.

Some travellers go even further and rip out pages as they go. Finished Argentina? RIP! Done with Australia in the Aus/NZ book? RIP!

(I shudder at this)

Another common and more friendly method is to give your guidebook to other travellers as you finish a region. It reduces unnecessary load for you, and there's often a person who will gratefully accept it. Failing that, many hostels have mini-libraries where you could leave it for future travellers to peruse or use.

I would ditch the hard-copy books. I have found that an iPhone and App based versions of guide-books are much more useful than print books. They are also more discrete. Most of the time, App based guide-books are significantly cheaper than hard-copy. Kindle books can be read on the iPad with the Kindle app. Again, these can be cheaper. It's much, much easier to carry a stack of guide-books on an iPad than in your luggage.

Get a cheap, second-hand iPhone 4 and use it for travelling. Back it up regularly (or even into iCloud). If your iPhone ever get's stolen or lost everything is still there. Plus, App based guide-books can get updated. If you get a data-sim in a country you also have access to Wikipedia and Wike-travel and Google Maps. Print guide-books are already several months out of date and will never get updated.

Your only other alternative would be to scan the sections of the hard-copy books you need. Make the pages into a pdf and you can read them via iBooks or any pdf reader App. Again, these can be backed up on-line.

While I love books and laptops, for travelling nothing beats e-books on a Kindle for battery life, ease of use and sheer lack of weight.

The Kindle only uses power when changing pixels from black to white or white to black. All other devices use power all the time even when the screen is blank, and use a lot of power to light up the screen.

Contrary to some answer, I think you can rely on a electronic device for traveling advice. You just need to keep it charged often and if the cost is an issue, use a cheap second hand iPod touch. For quick copy of some hard copy section, you can take photo of pages which you can save in Dropbox for extra security.

If you have more preparation time, the best is to build a custom map of your personal point of interest (your booked hotels, restaurants & attractions that you copy from the books) with My Places in Google Maps. You can then access it from every device and you will be able to use the GPS to find your way.

This is indeed a problem when travelling. What I do is buy the PDF ebook from Lonely Planet for the guide I want, and then I only print out the chapters for the regions within a country / region that are within my itinerary, so that I'm not carrying any dead weight.

I also staple the printed chapters separately, and once a particular region is completed in my itinerary, I throw away the printed pages for that particular chapter. This way, as I go along on a trip I get progressively less confused with which bundle of paper to reach for.

I always keep a PDF saved on my Kindle reader, in case I need to refer to chapter that I haven't printed out, or thrown away.

Not the answer you're looking for? Browse other questions tagged backpacking guidebooks or ask your own question.

14
Dealing with smelly travel daypacks?
19
What's the most comfortable way to travel with 2 backpacks or bags and a DSLR camera?
5
Hard copy travel guides with information on Tohoku post-tsunami
2
Does London Luton Airport have any bookstore with a good selection of travel guidebooks?
1
How hard is it to find hotels / accommodation in Vietnam on arrival?